It seems a bit strange to recap a Christmas episode and it’s not Christmas.. but .. well I can’t exactly wait till next Christmas! and there is lots of other scarecrow and mrs king goodness in this ep.. so I will just pretend it’s Christmas.. I am stuck in an isolated cabin eating beans and drinking vodka with 3 men and I am frantically hunting for the gas mask.. Oh wait… no that’s Amanda’s story! Here goes!!

A man in a phone booth is desperate for a new identity.. and is getting more and more agitated..threatens that if he goes down a lot of the agency people will go down with him..

That santa calling out “Merrrrrrrrrrrrrry Chrrrrrristmas” rolls his r’s alot..uh ho russian santa? well.. he does live in lapland doesn’t he santa??.. err I guess..

Wait! Could the Santa Claus Assassin be anymore obvious if he had had a big sign that

said “I am going to try and kill you! Muahahah” He actually stands right there and rings his bell- too funny! Santa rushing into a cab? LOL.. just think of all the kiddies who are devastated at finding out Santa takes the cab..

Love how when the bomb goes off there are absolutely no people around the phone booth..when a few seconds ago the streets had been teeming with christmas shoppers.. 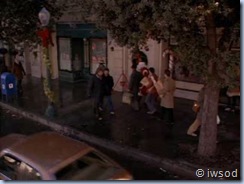 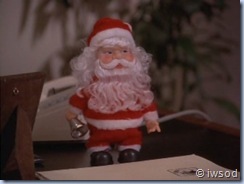 Love the little Segue from the assassin Santa to the Santa doll in Billy’s office! Not to mention the first thing Billy says as the camera pans away from Santa ‘ Ted Rudolph’ –LOL!!! Does he have a very shiny nose? Would you say it glows?!! A great name for a character in a Christmas episode.. Season 1 scarecrow and mrs king doesn’t take itself too seriously.. I love it! 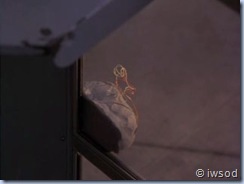 This bomb was a ‘sophisticated device’? LOL! it looked like playdough with a few curly wires sticking out.. I don’t know how Francine said that with a straight face..

Oooh my.. the first fashion police call out.. This 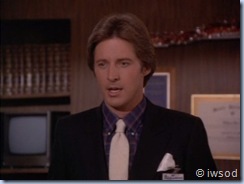 outfit should be arrested.. Lee looks like a gangster.. Black jacket, dark shirt and a white tie? ugh! white handkerchief too Lee?!!! Forgetaboutit!!! Oh no Lee!! quick get into that  hiking gear.

Nice try Billy.. trying to avoid the embarrassing Santa suit from the 6th floor (scenarios and cyphers).. he needn’t worry.. I don’t think he has much respect already anyway…

(though I think you are a cute teddy bear sometimes Billy..ahem..)

We do hear a whole bunch of info about Rudolph but it’s kinda a yawn.. lots of overseas locations.. the guy’s been in deep cover and is very experienced, but probably also burnt out…. think I’ve got all I need to know.. Whooo look! Billy has his new fancy chair and new noticeboard!!!

Lee suggests they send the guys back some phoney Cyphers. ha haaa Lee.. not very funny.. no wonder he isn’t in dirty tricks.. he isn’t funny enough to join the gang.. 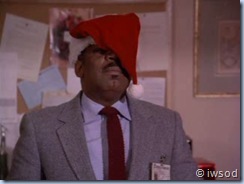 Amanda and Dotty trim the christmas tree… It’s sweet to hear them discussing their christmas memories.. Awhhhhh look! I never saw that before- one of the christmas ornaments on the tree is a Panda!!!

Ohhh boy.. Amanda’s expression when she realises what’s coming from Dotty!!! Yep.. another Dean lecture.. Dotty is still trying to accentuate the positive with Dean.. only this time Amanda beats her to it and lists his well known qualities.. Amanda again says ‘ I’m just not ready yet’ and Dotty responds ‘ I’m not trying to rush you.’ – ugh!! you just can’t talk him up Dotty – it’s there or it’s not.. and Amanda just isn’t feelin it! Whoo Dean is coming for christmas dinner.. Amanda manages to get out of that conversation by saying she is off to deliver presents to the people she works for. Dotty asks her what they are like- her clients – but Dotty you met Francine (the client with the pet Chimpanzee) two weeks ago you don’t remember???!!! I think this is lack of continuity here not an episode order issue..but I won’t get into that now..

Can someone tell me why all the male agents look like total geeks? and only Lee is a super hunk????!!!!!

The office christmas party is in full swing and Lee and Francine are talking when Amanda arrives all enthusiastic.. you’ve got to admire her graciousness towards Francine.. Francine of course criticises Amanda the moment she sees her.. but.. whoooo this I love.. Lee stands up for Amanda!!!
Francine: you don’t seem to be getting into the spirit of things.
Lee: ahhh I’m just not very big on parties

(they spot Amanda..)
Francine: oh come on! It’s christmas!.(Amanda arrives waving gifts!)… Ohhh and speaking of Jolly there she is our woman in suburbia, bearing gifts. 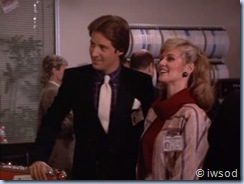 Francine: I wouldn’t dream of it.

Just love how Francine is telling Lee he has no christmas spirit and then in the same breath she makes fun of Amanda, someone being nice to her and saying hello.. seems Francine’s idea of the christmas spirit is a little different to mine!Hurray for Lee pointing out how Nasty Francine was being! (ok Lee I forgive the tie now!!) Notice Lee doesn’t look like he is annoyed that Amanda showed up??!!! 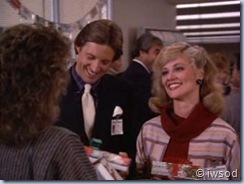 Amanda hands out her presents for Lee and Francine.. you know, I think Lee is genuinely

enjoying this.. and thinks she has done a nice thing

Lee goes pretty quiet when Amanda tells Francine the perfume is called intrigue and it’s really good for the spy.. and he seems a bit shy here! I may be mistaken, but I think Lee is quite touched!! 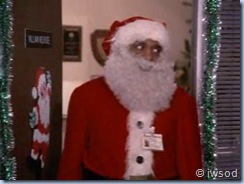 Billy gets a call from the burnt out agent Janus (Rudolph’s  code name), the guy we saw in the phone booth.. he wants his daughter to be found and delivered to him in 2 days or he will reveal the names of every American and soviet undercover agent working in the USA. ( I get why the agency wants the names of the US agents kept secret.. but the soviet ones?? eh???)

Finding Janus’ daughter in 2 days is going to be next to impossible..what to do?? Lee, Billy and Francine ponder…. then.. Amanda taps on the window.. Billy’s face lights up.. he has an idea..

Immediately Lee knows what he is thinking- Amanda can stand in the daughters place!!!!! and Immediately he is against the idea! Oh dear.. Amanda do you have to keep signalling them over and over at the window like you are an idiot? they’ve seen you!! ohhh where can I hide… Lee doesn’t think she can pull it off.. when she is signalling like an idiot through the window.. I have my doubts too..

On to the baddies.. whooo Mikhail Gorbachev portrait.. right.. russians! Got it..

The russians phone taped Rudolph’s phone (wouldn’t he have guessed they would do that .. 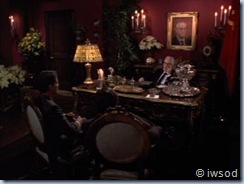 or was he now terrified of public phone booths thanks to his run in with santa and chose to risk it??!!!) .. the head 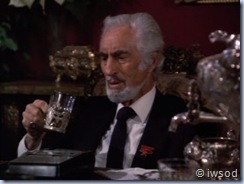 baddie says Rudolph must be neutralised immediately.. I guess to stop him from revealing the identities of the soviet operatives working in America? ROFL!!!! – Tea sipping baddies.. You

know a head baddie is nothing without a good cup of Russian Caravan tea! as this baddie discovers trying to drink american tea.. ( it’s so bad he adds sugar! lol!) hehehehee. It’s funny how he is calmly talking about killing Rudolph and then, he says that the tea is abominable.. yup.. killing someone is nothing compared to drinking American tea

Off Lee and Amanda go on their little road trip.. you know the little porsche reminds me of Maxwell Smart’s car.. I prefer the vette…. anyway..I digress..  this conversation in the car takes an interesting turn doesn’t it!! Amanda is stressing about all the things she needs to do for christmas Eve, and Lee reassures her it’s a simple assignment and she’ll be back by four. 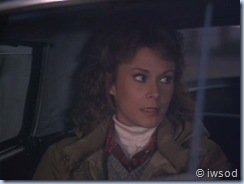 Love this response from Amanda: That’s what you always say!

Good Call Amanda!! Lee’s convinced this will be a simple job.. oh Lee- this is scarecrow and mrs king!! Nothing is ever just a simple job!!

Amanda seems an old hand now.. she’s learned her ‘scenario’ as Karen Rudolph ( Karen – are you reading this?? did you particularly like this episode? is this why you chose this handle?!)

Amanda: Gee that’s sad… growing up without a father…

Lee: Some people manage to do very well without a father

Amanda: oh I’m sorry I didn’t mean to get personal 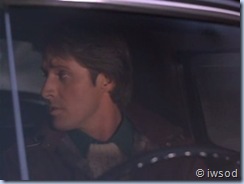 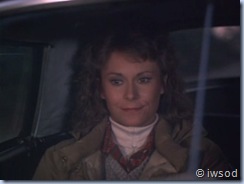 (yeah right Lee…and does Amanda know that Lee’s parents died when he was little yet? She knows he had a rough childhood but I think that’s it..)

Amanda: so how do you usually spend your christmas

Lee announces proudly: On my living room couch! with a large bowl of guacamole dip,

a perfectly chilled bottle of Dom Perignon 73 and a good football game. 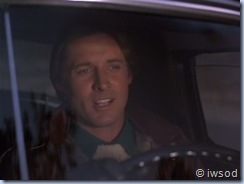 Lee: christmas is just like any other day of the year, it’s 24 hours long, the sun rises and sets, 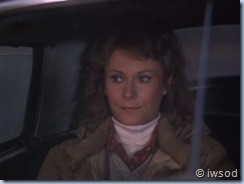 the mail and the next day is the 26th. 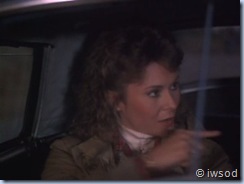 Amanda: Oh come on scrooge, I know somewhere in there is a little boy who has lots of homey christmas memories. 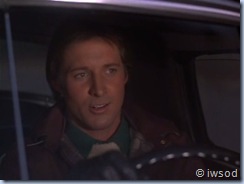 Lee: Home for little Lee Stetson was wherever his uncle was stationed.. once in greenland, once in hambourg, twice in Guam, believe me christmas dinner in a mess 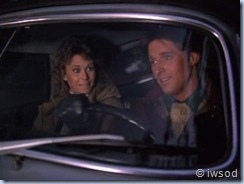 hall with 500 guys fighting for the dark meat isn’t too homey and that’s nothing compared to the easter egg hunt in the sahara! 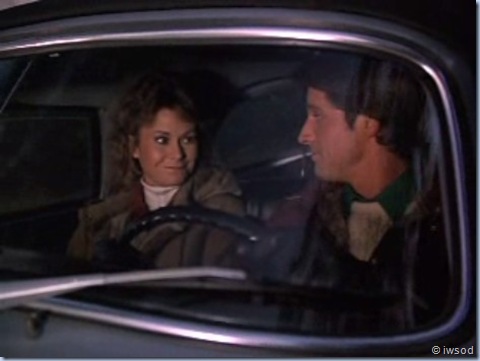 Awhhhhh I just want to cuddle Lee when I see this scene.. he is trying to put on a brave face…. not just for Amanda but for himself.. but.. he doesn’t quite get away with it.. when he mentions home being wherever his uncle was stationed he practically spits this out.. his resentment in tangible..that he didn’t matter to his uncle and was a burden.. what was it that Lee said to Amanda in the ACM kid? ( ‘kids need attention and someone to talk to’) .. I think Lee got very little of either.. poor Lee.. don’t you worry.. Amanda is going to fix all that- once you step up that is.. heheehee.. anyway I just think Amanda (us too!) learn a lot about Lee here in this scene.. and I was surprised he told her that much.. but I think he was so busy trying to be proud of how he spends christmas that it didn’t occur to him to censor what he said! … but this comes back to haunt him later in the episode!!

Oh dear.. Lee doing the inventory and giving it all to Amanda to carry is too funny… why he doesn’t have a back pack all ready with that stuff in it is beyond me.. but at least this way was funny! seems Lee has parked the car and suddenly gone into business mode.. or should I say Military mode! He doesn’t even respond to her joke…

Amanda: now I know why you really brought me along. 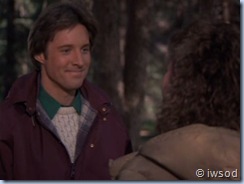 Lee just smiles and sticks to business ( Lee, regretting sharing in the car?!) 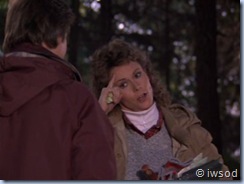 (I’m surprised he didn’t continue on with: left! left! left right left!) Amanda copes good naturedly with it though..

Off they go on their trek.. followed closely by the  baddies who are following them to Rudolph..

I remember the first time I watched this episode I was laughing about how bright their hats were and what dills they are.. how could they make

Well, that’s it for this post.. we will leave Lee and Amanda roaming the woods for now! Back soon with more.. thanks for reading!