Picking up right where we left off.. Skip’s taste is improving.. and Lee is going to tell Amanda where ‘skip’ comes from ‘later’!

Lee takes a deep breath before broaching this next subject..
Lee: Sir I was ah.. well I’m very sorry about the court martial. …what happened? 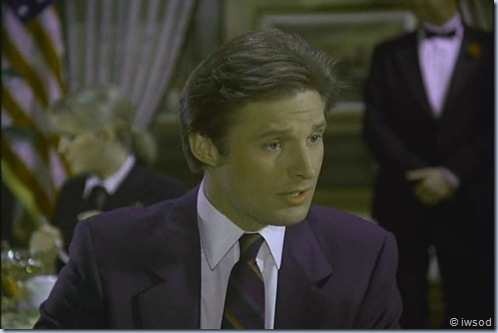 [ Lee sounds genuine here to me.. what do you think? It’s dangerous to bring this up so quickly- but hey.. I guess this is a 45 minute tv show and we’ve gotta get a move on!

]
Colonel: well I wish I knew …one minute they’re in a 180 roll slipping over into an inside loop… Next minute they were gone. 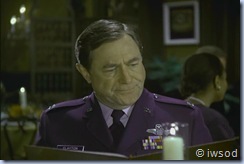 [the Colonel sounds so matter of fact here- when it is anything but! Reminds me of Lee describing his non relationship with his uncle just before! (in post 3)]
Lee: Hmm I heard the manoeuvre was suppose to be very dangerous.

Amanda quickly: ohh would anybody like to split an appetiser? 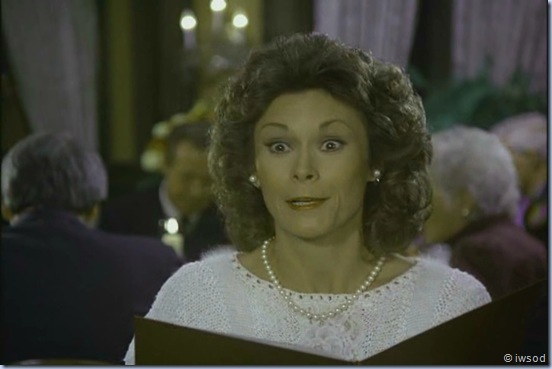 Amanda smiles at them both.. the Col. takes a deep breath and calms down..
A man who expresses his emotions as anger?? Hmm.. sound like anyone else we know??!!!
Lee and Amanda share a quick glance.. 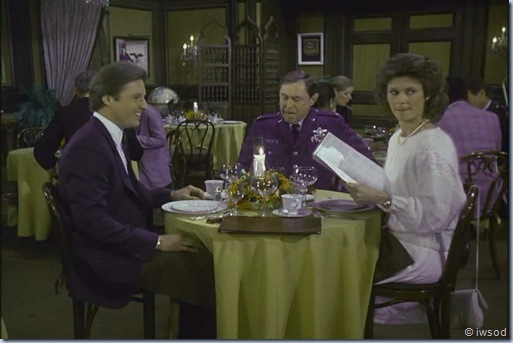 Amanda looks around a bit –maybe a hint to the Colonel to keep his voice down?? Poor Lee he just got chewed out over nothing – I think the Colonel’s anger isn’t directed at Lee but it comes across that way. Given the stress the Colonel is under- he is not at his best I am guessing.. this also sounds like someone else we know?! I think there are many parallels between Lee and his uncle!
Col Clayton (now calm again): Barry Austin and I umm alternated as flight leaders….

… That could have been me out there and I wish it had been… [ahhh now we get a more emotionally honest response from the Colonel, for a man of pride this must be very hard] …when my men went down, I should have been with them.

[I don’t think the show goes there: but what a thing to say to your nephew who lost both his parents at a young age?! I think Lee would have been devastated had it been his uncle.. but maybe his uncle doesn’t know it yet]

Col. Clayton: ahh well I talked it over with General Patterson and I decided to represent myself.

[oh boy- another red flag!! I don’t remember but I’m guessing Patterson is a baddie! he probably manipulated the colonel’s pride and self reliance so he would make this really dumb mistake!]

Lee struggles here.. how to respond to this carefully..
Lee quietly: ahhh excuse me Sir, but do you think that’s a wise decision? I mean you’re going to need help building your defence.

Col. Clayton: I don’t need a defence, I haven’t done anything wrong!

[whoo that sounds like something early Amanda would have said! The Col. is really not coping well]
Time for another cheery Amanda interruption: Stuffed Mushrooms look awfully good!

[anyone else reminded of Scotty in Filming Raul.
Scotty: Whoooo I love Mushrooms! do you like Mushrooms Raul?
Raul: Not anymore. 😆 ] 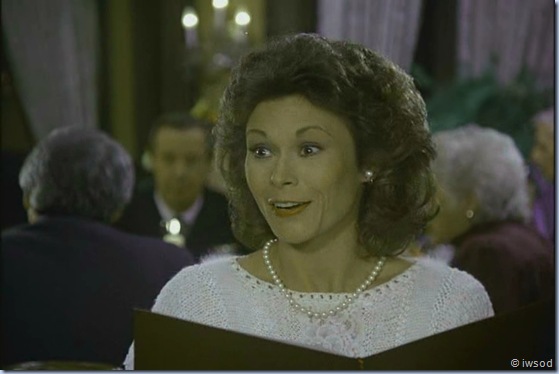 Lee responds to the Col: No Sir, I’m sure you haven’t but err… 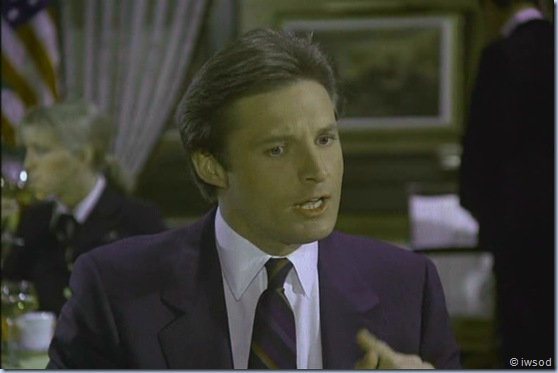 (Lee’s control here is slipping.. uh oh.. his starting with the finger pointing!)…people are getting very very upset about this.

Case in point- Col. Clayton (now furious): to hell with them!! 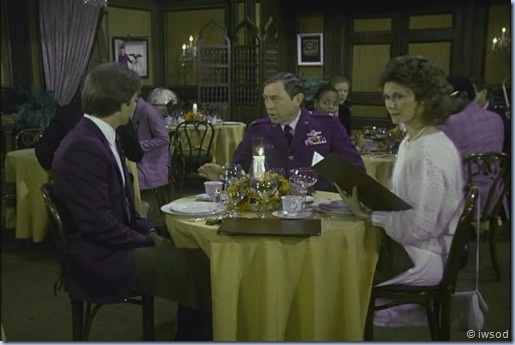 I’d say this one line of the Colonel’s probably sums up his character nicely! 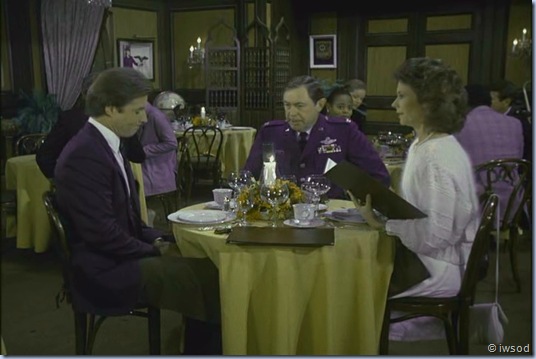 Oh boy!!! It’s not just the mushrooms that are stuffed Amanda! 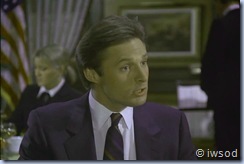 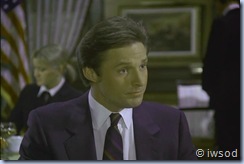 (Lee’s anger begins to rise again) sounds like you are basing your hopes on a pretty flimsy possibility here! 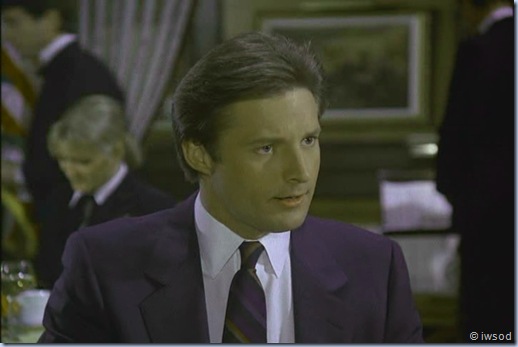 [Wow.. The Colonel really needs Lee’s help.. just what does he think Lee does for a job?? Lee can help! Only.. I guess he doesn’t want to ask Lee for help

]
Col. Clayton: I didn’t come here tonight to have you butt into my business. 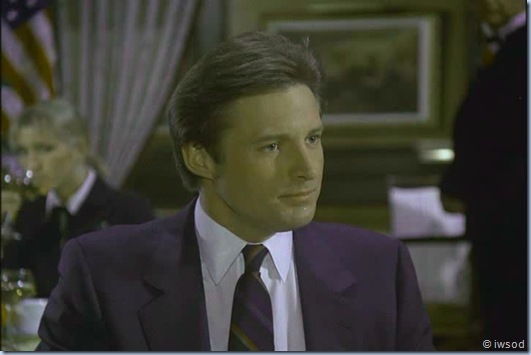 But Colonel! that’s what family does!!!! Man I wish they had used that line!

Lee looks over to Amanda for moral support-awh!!

Feel free to disagree, but to me Lee looks more worried here for the Colonel than worried about his wounded pride or past resentments.. which I think speaks volumes about Lee’s care for his uncle. Well done Lee.. 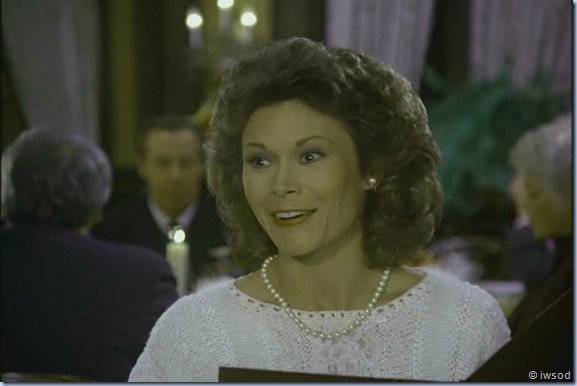 Col.Clayton: What?
Amanda (off camera): The veal.
Col. Clayton seems to realise he came for dinner!: Ohhh yes..

and he looks back at his menu again..

If you hadn’t heard anything about the Colonel before you actually saw him on screen, what would you think of him? He is an interesting character! Not one dimensional at all.. he s not at his best, making mistakes, being proud, dismissing Lee.. but he is also being very kind to Amanda, does give some indications that he is happy to see Lee.. and he is suffering the loss of his men – and under alot of pressure..

BTW the script has a few lines extra before this scene ends.. after The Col. tells Lee to butt out Lee says: “Why don’t you stop being so bull-headed and listen to me for once? We’re talking about your career here!
Col. Clayton: That’s right and keep it in mind, it’s my career, not yours!!”
Interesting they cut it out huh! I think Lee sums up well what’s going on here – but I am guessing the story works better if they hold off a little with Lee confronting his uncle like this!!!

I think Lee did a great job- knowing how he feels about his uncle- I think he managed to control his temper pretty well all things considered!
Love how Amanda inserts the praise of the menu! It’s great how she injects some humour here!

Uh oh… next thing we see is Sergeant Ballard in a dump of a hotel room.. alone.. drinking.. and on the phone telling Elise

(who he loves) that he has to testify the next day and finally tell the truth he has been hiding?? oh dear…. the man just signed his death certificate!.. He’ll be dead in less than 10 seconds.. ha

haa!! I’m gonna count.. he moves to the wide open balcony door to look at the view from his very high hotel room.. cue the scary 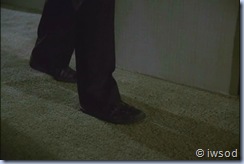 music.. whooo  close up on sneakily approaching baddie feet.. and…. whooooo… he’s a goner!! –it took about 20 seconds!.. 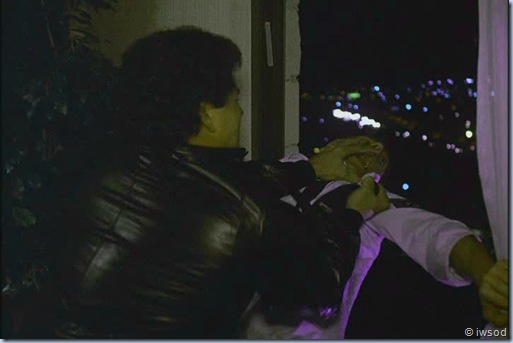 Poor man..
Never ever have an attack of conscience alone in a dumpy hotel room!

Haaa.. did you see the guy do a stunt somersault as he was errr ‘ pushed’ out the win 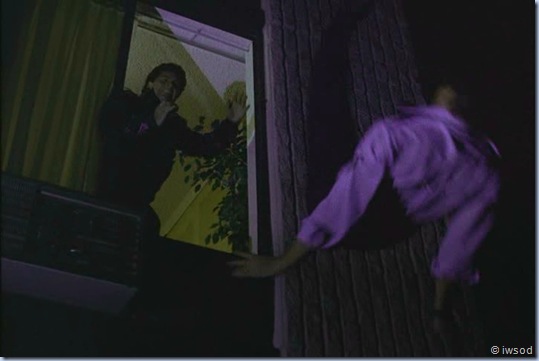 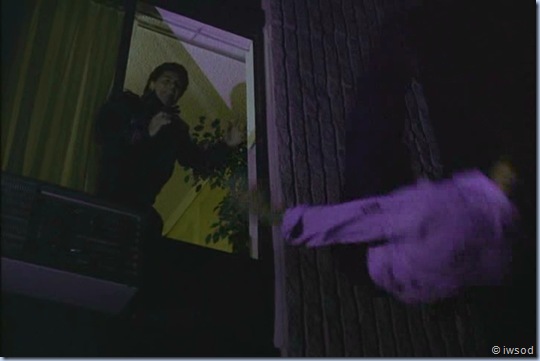 Okay.. well on that lovely whoo hooo I am going to finish up this post.. I wanted to quickly follow up the last post as I cut the one scene in two, soooo here is the second half! As always I am very excited to hear your thinking! byeeee for now!!