2/2 SMK Stats: If Thoughts Could Kill (a.k.a. The Damn Duck Episode)

Welcome back, everyone – we are now on to part 2 of this lovely episode.  Ok, so lovely may be overstating it….  On to all the action and all the saving!  I think this may be the only episode where Lee is pretty much a victim from start to finish and Amanda is doing all the saving!  Pretty good for a suburban housewife with no training!  And thanks to iwsod’s help, I’ve made my first GIF! 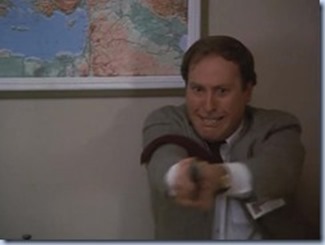 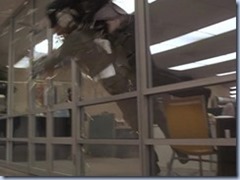 Enter fearless Scarecrow to save the day! 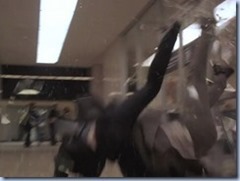 Falling to the floor… 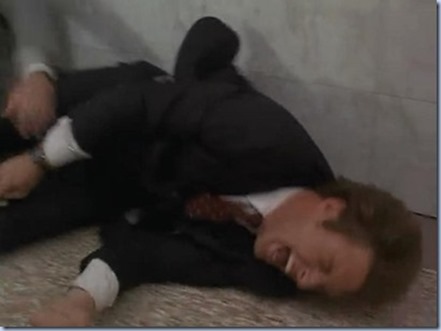 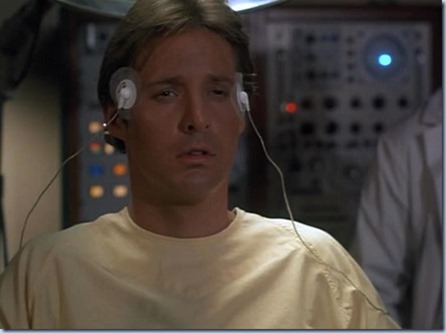 Nice face, Lee. Oh wait, he’s being brainwashed. If I was drugged and forced to watch that ridiculous video I’d look like this too.  Actually, probably much worse. Ha!

I suppose I should have at least one picture of the damn duck! 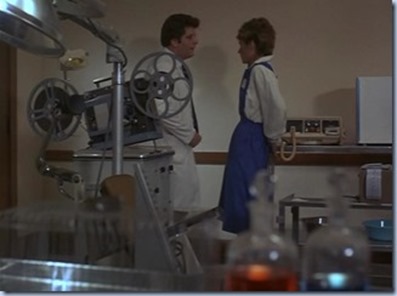 After Ogden overhears Amanda talking to Lee on the phone, he forces Amanda into the little room in the hospital basement.

Then he forces her into the chair to gas her!

Sorry pal, Amanda does all the saving in this episode! In fact, here is Amanda saving Amanda!

And don’t forget the damn duck!

A: What did you just say? Barbie: I said it gives me the most incredible sinking feeling. Hmmmm, where has Amanda heard that before?

Barbie: Laundry is this way – that’s where all this steam is coming from. Steam? That sounds familiar too! 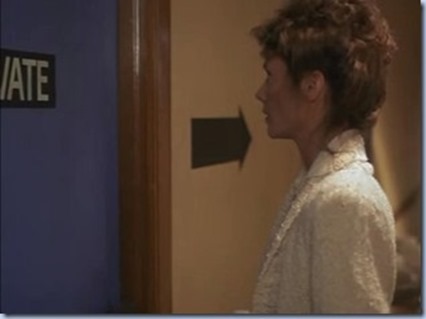 A: Barbie, what’s through this door? The BLUE door!!! Amanda knows what she must do next! Why go in to investigate, of course! 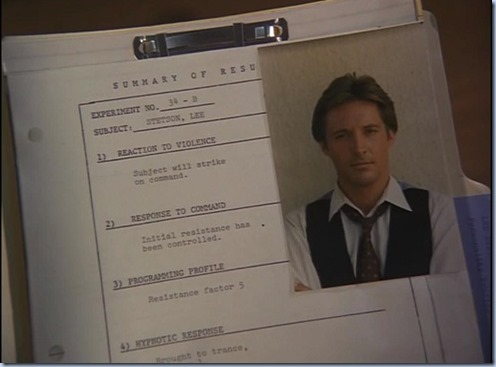 After going into Dr. Glaser’s “storage room”, Amanda finds the files on Walt and Lee. Damn! Still no plaid!

It’s over and Amanda has saved Lee and Billy! Love the look on Lee’s face here – how? what? huh?

A: Well, ha (laughs), gee, I’m early. I’m not supposed to jump out of the cake for another hour! Ha!

Ahhh, love this part next. One of my most favorite wordless scenes in the series. I need to figure out how to make myself one of those signature picture thingys with these caps. 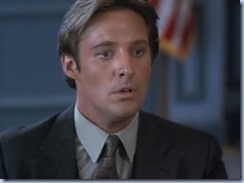 Why do I love this scene? I think it’s because IMHO this is the first time in the series where Amanda makes a meaningful chink in Scarecrow’s armor. If you can, go back and watch this scene and see if you see what I mean. Amanda has already left the room, but Lee is staring after her as if he can still see her. He is realizing what she has just done for him and Billy and I think he is absolutely and completely amazed at this. And to top it off, she leaves the room making a total fool of herself instead of giving any hint about what Lee almost did. As iwsod says HERE in this post about Lee’s Journey, his heart is safe with her! What a powerful moment for him!

Here is a GIF of this scene – which do you think shows what I am trying to say better:  the individual pictures or the gif?

If there are any America’s Next Top Model fans out there, I’m guessing the last frame is what Tyra Banks meant by her term “smeyes”??  (Smile with your eyes for non-fans.   Ok, don’t ask, no I don’t watch the show, but I have seen enough of it to use this term.  I will admit I am fascinated by how they can make a person look like a model in a picture though!)

Who left their keys this week? 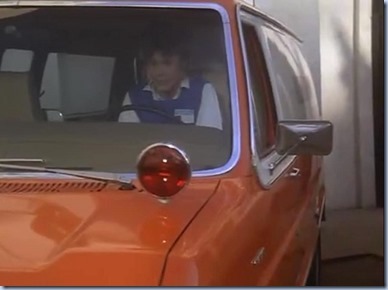 Alright! the ambulance driver left his keys in the car! Now Amanda can escape from Glaser and Ogden and go save Lee and Billy!

Rats! The other ambulance driver did too! 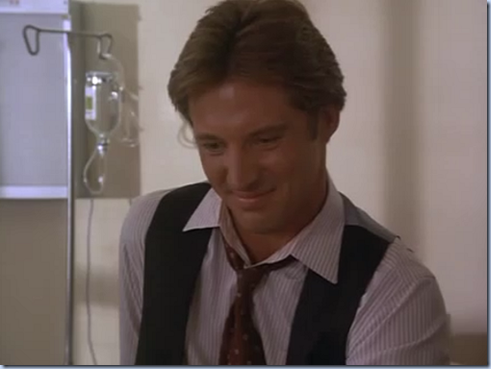 Left dimple? This may require a little imagination.

I just couldn’t bring myself to add a dimple picture where Lee was being a major crab with Amanda…at least in this picture Lee is in pain.   Take that, buster!

Finally! An honest to goodness dimple!  Albeit a fuzzy one.

A: Now see, Glaser never would have been caught if you hadn’t gone to the hospital.

Thanks for reading and commenting, everyone!  For having to deal with cranky pants Lee and that annoying duck we really do get some fantastic moments in this episode.  I guess we have to take the bad with the good.  Sudden Death is up next – wooo hooo!  You know what that means…cover kiss and could it be our first Lee wink???   Until then!

HERE is the link to take you to iwsod’s posts on ITCK.