Back at the agency, and two serious looking military types, another guy, Lee, Francine and

Billy are listening to Retzig’s tape..
Retzig on the tape states: I want stop until the plans for Stryker 1 are in my possession…

(LOL thanks for the reminder of what the plot is!)… by now Stetson I hope you

realise you will always be one step behind. It’s time we get serious. In denwood  park in three hours. (Eh? Is that three hours from when he left the tape?? and how do they know when that is??!! why wouldn’t he give a time! weird..) Oh and

something I neglected to mention earlier, if the proper antidote is not administered within the next four hours the effects of the drug become 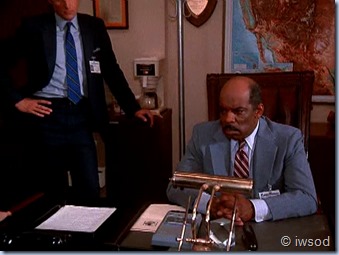 permanent. [LOL why wouldn’t he have said that to start with? it’s motivating!

] Also notice- the close up on the tape player and the shot with Billy don’t matchy matchy! 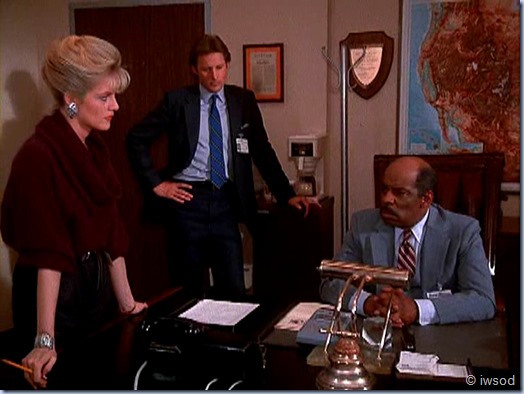 Oh well.. so what to do eh.. Billy asks Francine where Amanda is.. [

I really like this jewellery on Francine! ]
Francine says Amanda is down in the lab and doesn’t remember Retzig’s visit – soooooo what did he do to her?? did he do anything to her? why not just leave the cassette tape there and leave? I’m confused! how about you?? Hmm.. maybe he woke her up to see if she was off with the pixies?? So he could confirm she had taken the drug? Ohhh I don’t know!!! anyone??

Fronan’s made no progress on an antidote.
The general sympathises (uh oh.. that means he won’t help

And coming from unhelpful military guys it will really really really get Lee’s goat!
Lee walks over to confront him: you’re not just walking away from this. 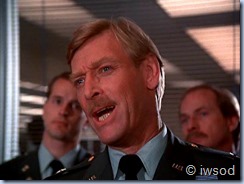 The general isn’t going to jeopardise the weapon system.. there are ‘too many man hours’ in it.

Errr that’s work hours.. sexist general.. I guess no woman is equal to time spent in ‘man hours’! Ugh!! You tell him Lee!!!

Lee: we are talking about a woman’s life here! A mother of 2 young boys! 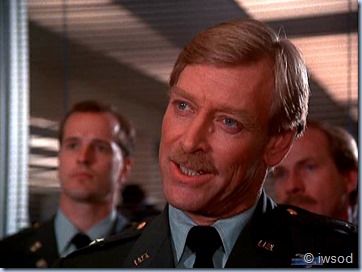 a squad in order to save a battalion.
I’m surprised at this attitude..(wrongly I know!) Amanda is a civilian, who this general is suppose to protect. He doesn’t even try to help.. Well.. you can imagine how Lee is going to take this!!! Coming from a military guy?? Look out!!!! 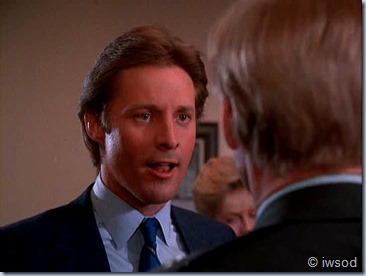 Lee is furious and yells in his face: well not in this outfit Pal!!
But Lee.. I like your outfit.. you always look good in blue.. blue shirt, blue tie.. nice combo! oh wait..
Uh oh.. Lee just called the guy Pal!!
Awh come on.. use Moonface occasionally Lee.. it’s a doozie! tee hee.. I see a little bit of – the agency is better than the military again here! Gooo Lee!!!

Alert!! Intense Lee over Amanda in danger here- in front of the others!!

us to fight among ourselves, [whoo Billy is being a boss!!! I’m impressed

tell everyone to Hakuna Matata!] …now there must be some kind of compromise solution to

this.
Lee: oh I’ll tell you the general’s solution.

Nuke Retzig till he glows!!!! but that is not how we’re going to get that antidote. 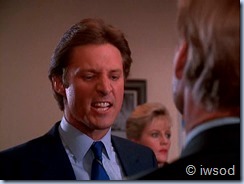 swoony swoony swoon swoon… Lee isn’t half as concerned about catching Retzig as he is about the antidote! This is the same level of intensity we saw with Lee and ‘she’s a very very good friend of mine’ Mario!!! Only.. this time Lee has an audience.. ahem..

Was this a little attempt at reverse psychology here from Lee? LOL after all this writer [Nelson Costello] seems to be going the psych route

and Lee was pretty confrontational with the General here..LOL
I don’t really think it was intentional reverse psychology.. this reminds me of Lee with Auggie- insult the guy when you need him to do something for you! LOL!!! It’s not exactly diffusing the situation.. you’d think it wouldn’t work.. but.. it works a charm! LOL!! The 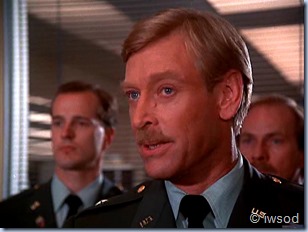 general comes up with a plan.. He’ll give the blueprints, if he can surround the drop with his men. Lee laughs at this suggestion. Oh boy  Lee way

to get the general on side.. I’m surprised he doesn’t tell the general to buy a new uniform and nice cuffs 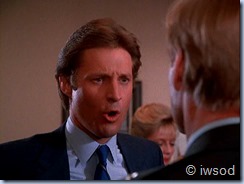 Lee thinks Retzig won’t come within a mile of the drop.. but the general has some faith in his men.. Retzig won’t even know they are there.

Francine: Excuse me sir, but the reason Retzig chose denwood park is because there is no cover there, no buildings, no way you can get anything or anybody in there without anybody seeing it.

LOL, I like that for once it isn’t Lee solving everything and making the military guys look like idiots! 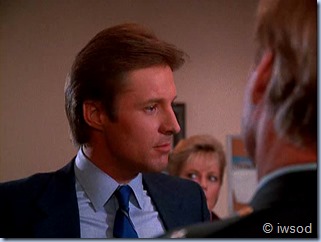 Lee’s response to Billy’s agreement to the plan is pretty harsh: You’re asking me to put my life in the hands of some trigger happy commandos, come on Billy! [err Lee yes-looks like it.. so I wouldn’t insult them!

]
Ahhh Billy.. for a moment there he sounded a

bit like a boss.. Billy responds: no I’m not!!! though I haven’t heard any better ideas!

LOL!!!!! so funny!!! Lee takes a deep breath.. Lee you think that everyone is waiting for you to give your agreement to this plan? Oh wait.. I think 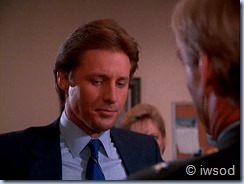 Lee: Alright. but I want this to go down on the record- there’s only one reason I am going through with it..

got to be because of Amanda!!! 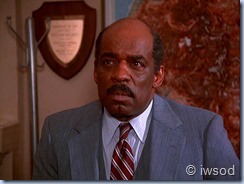 What do you make of this huh??!!! Phew!!
I’m thinking the fact that Amanda is the mother of two small boys effects Lee.. His losing his mother at a young age – it is always there for his character and it makes him vulnerable and open to caring about her and her family.. swoony…

At the same time, I think he uses the ‘mother of two small boys’ thing as a front here – it’s easier for him to say he cares about Amanda because she is the mother of two small children, and channel his strong emotions into that fact, rather than reveal to others that he would just be devastated if he couldn’t help

her full stop! boys or no boys..
I see Lee as having realised this is how things are by this stage.. though just not sharing it with others. What do you think?

It’s like what a few of us saw when he told Billy he’d tell Amanda about the poison because it was his sandwich.. but feel free to share if you read it completely differently! I’ll just happily

swoon away here as Lee plays the role of Protector of Amanda’s actual life here!!!! Not just her dignity!!

Okay well that’s it for now.. trying to keep it short and sweet- but hey.. no need for the comments to be short and sweet! Share as much as you like with us all.. I’ll look forward to hearing from anyone who’d like to share.. feedback, questions etc are also very welcome – byee for now!!