Time for a bit of Murder between Friends!
LOL..
I currently have a love hate relationship with this episode because I’ve been transcribing this episode for ohhh about two years for Operation Sandstorm! It’s a great feeling when it is done.. but with writing the blog too, it was all a bit much.. I won’t be transcribing another for a while! Though I suspect that after we’ve walked through the episode I’ll be plain loving it again! 🙂 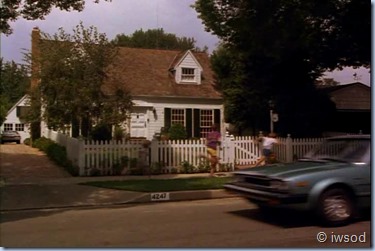 This episode opens at Amanda’s –the Pitt family are running past as usual! I’m starting to suspect they are Russians..

Dotty is calling out ingredients to Amanda.. seems they are in the kitchen making a shopping list.
Dotty: We need Eggs, Milk, Butter, Bread ah-
The boys come rushing into the kitchen interrupting.
Jamie (at the same time) : Hi Mom.
Phillip: are you gonna mix everything into goop again?
Amanda: I thought you liked that goop!
[Are we suppose to know what this goop is?]
Jamie: it looked funny.
Amanda: What???

Dotty laughs: you’re too young to be a food critic!
ROFL- Love those Dotty pronouncements!
whooo there’s another Cracklin Critters sighting!! You guys notice the conspicuous packet on top of the refrigerator? Also in ship of spies and in DOA-[ in DOA LASinLA explained this is a melange of the Crispy Critters and Cracklin Oat Bran brands.. cool!]
Jamie: Hey Mom, can we get a wizard whopper?
Dotty: A what?
Phillip: It’s the neatest! It’s magic!
Jamie: and you can’t whop wizards without one.
[Harry Potter didn’t have one!]

Was there a well known wizard doing the rounds in 1985? anyone?
Amanda: Sweetheart, a wizard whopper is pretty expensive.
Phillip whines (yes whines): but everyone else has one.
Amanda: well you don’t want to be like everybody else do you?
Jamie and Phillip together: yeah!!!

Love how Dotty rolls her eyes in response to Phillip and Jamie here!

Amanda: ohhh hhaaa.. I’ll think about it.
Jamie and Phillip: Yeah!!
Amanda: Okay! Outside and be careful!
The boys head outside.. and Amanda continues with checking her shopping list and her coupons. Ahh this is a nice throwback to this line in Spiderweb of Francine’s: It’s what I’ve suspected of her all along, the woman is a coupon clipper! She’s bargain shopping at a furious rate.
I like it when they have continuity! Dotty is pouring a tea for herself and Amanda.. clearly the tone here is one of financial stress!
Dotty: Do we have a wizard whopper coupon in there?

Amanda: you know what, it really is frustrating. I work and I work, and I don’t know where the money goes!

At this, we have a one shot of Amanda.. and can finally check out the hideous shirt she is wearing.. I can tell ya Amanda.. your money is not going on clothes I would wear! Gah! Please don’t leave the house in that outfit!! There must have been a coupon for ‘ugliest shirt ever’ when she bought that shirt!!

Dotty: Amanda, let me tell you something. You have been with IFF quiet some time. I think you ought to ask for a raise. You deserve it.

[There has been some wonderful lead up to this whole situation.. I love how this whole issue of Amanda, employment and money doesn’t just come up out of the blue- it underlines for me that the writers were really wanting this to come to a head in a significant way]
Amanda: You know what? I have an appointment with Mr Melrose this morning. I think I will ask him for a raise, I think you’re right. 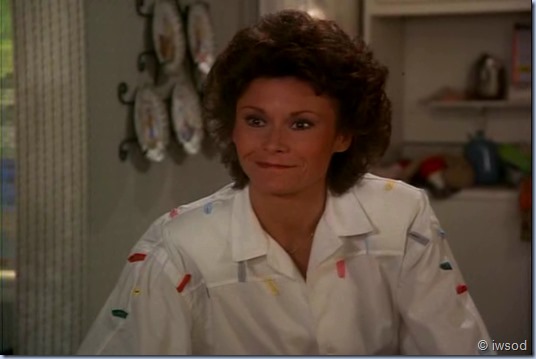 Someone commented in Burn Out comments of how Dotty heard Mr Melrose’s name in that ep- seems she hears it again! I’m not familiar with what is ahead: but for now, Dotty seems to know Amanda’s boss is Mr Melrose.
BTW- Amanda already had an appointment with Mr Melrose? what was that appointment going to be about? [rhetorical question!]
hmm we’ll see..
Dotty: Of course I’m right, I’m your mother!

LOL Dotty does say this tongue in cheek

I love how Amanda just responds with a chuckle.. does this line of Dotty’s remind anyone else of the Mother of the year contest? Dotty should have been nominated! 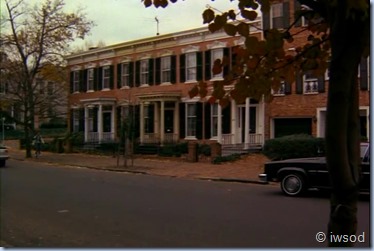 In the bullpen, a crowd of unknown people are standing with their hands raised, being held at gunpoint.

Billy is in his office, guarded by a gunman. [who is probably patiently waiting for Lee to come beat him up!] 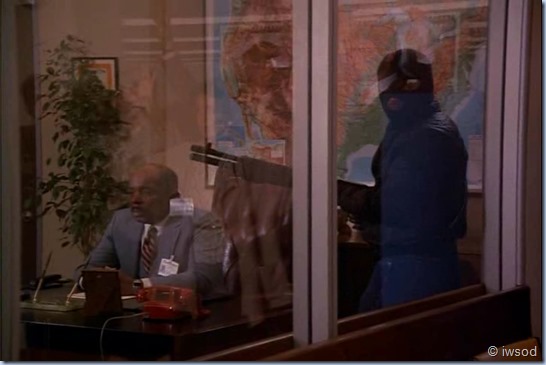 In the IFF hallway, we see many military personnel, held at gunpoint by another g

It’s just so good that Lee had time to change out of his suit before the place was taken hostage- what luck!

Lee whispers: synchronise your watch. We have to be dead on.

Lee quietly: twelve straight up? Mark!
Francine: we have thirty seconds to neutralise the hallway.
Lee: alright, once we hit the bullpen we’ve got 4 seconds to get Billy.
Francine: if he’s still alive.

Lee: yeah.
Oh noooo this is all so horrible and scary!!! the agency is under siege?!!! Only Lee and Francine can save the

day!!! ahem.. 😉
They wait a moment, check around the corner, and see the bullpen being held up by the gunman.. bing! We hear the elevator arrive..

Then Lee says to Francine: now! 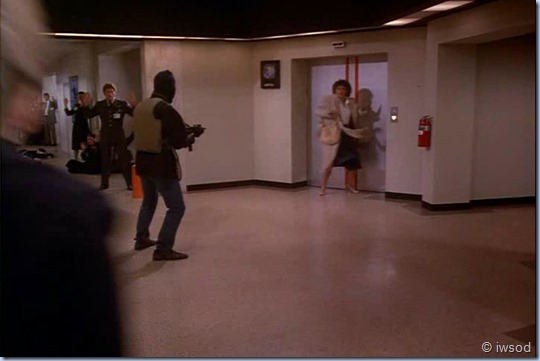 Lee and Francine rush into the hallway just as Amanda exits the elevator to find she is being held up by a gunman! Love how she quickly turns and tries to get

back in but the elevator door closes too quickly! Lee and Francine see this. Amanda stands still with her arms up. [LOL Amanda is a fabulous distraction!

]
Then, Lee quietly grabs the gunman who is holding up Amanda from behind quietly making him unconscious. 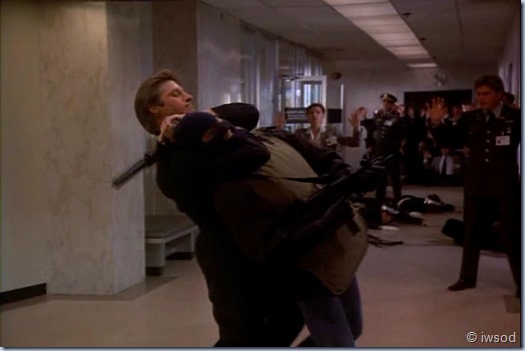 ROFL that really does look fake! haaaaa.. [sooo does Lee really knock him out? or is that pretend?]  Lee rushes over to Amanda, who by now is frantically pressing the elevator button to get out of there! ROFL She is too funny!!!
I can’t help but think.. putting Amanda through all this??
She really does deserve a raise!

He grabs her, and brings her along with him. Amanda explains the elevator button to Lee: Broken!!! 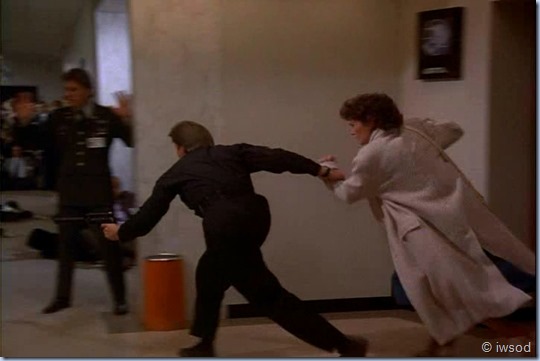 Lee crouches along with Francine and Amanda next to the bullpen, readying themselves to storm it. Time to tackle the bullpen and get to Billy now the hallway guard has been taken out- err are all those people in the hallway cut outs? or real people? cos they are so motionless and quiet it is just weird! I guess they didn’t move so the baddie in the bullpen wouldn’t know there was help coming?(but he has his back to them?!) I don’t know..but it is funny seeing everyone still standing there with their hands up now the guard is gone! haaa..
Francine: we only have 20 seconds!
Amanda: guns?
Francine: where’s the target?
Lee gets out a folding mirror, holds it up to sneak a look at his hair.. no no!! I mean at the bullpen.

Lee: five degrees right of the computer terminal. [5 degrees? oh purlease!] We go in five.
Amanda: what do I do? 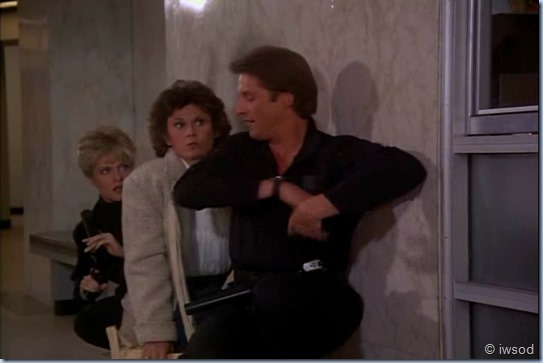 (Lee counts looking at his watch. Not answering)
Amanda concludes to herself that she does: …Nothing!

He dives, crashing through the glass window, landing on the floor in Billy’s office with a roll. At the same time, Billy grabs the gun off the gunman guarding him, who had been taken by surprise by Lee. 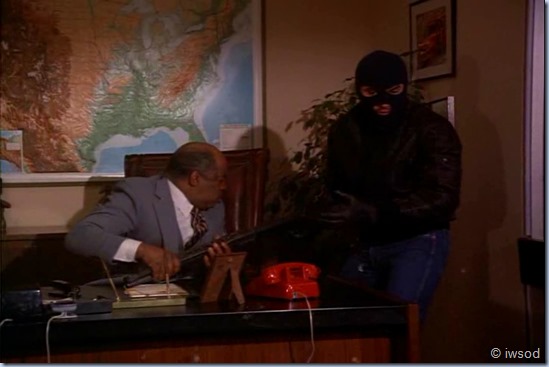 Taking cover behind a chair, Lee aims and shoots the gunman, hitting him.

Next time, try to come through the door!
Knowing this is all a big set up this all seems a tad clunky but oh well.. smk gave it a good go.. 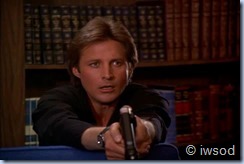 Lee puts his gun away: I thought it was a nice touch! You said you wanted realism.
Realism? rofl!!! too funny.. Lee just broke some guy’s neck out in the hallway and shot someone. I really hope they aren’t going for realism – or tomorrow it should be Lee’s turn to play bad guy

Is it just me or is it hilarious that Lee and Francine are the only two people at IFF who are training to deal with a takeover?? I mean those two security guards there in the hallway? they wouldn’t need any training in this would they?

nahh.. they just lay on the floor face down and wait for Lee and Francine to rescue them! That’s the plan!! whahaahaaa!
Francine enters the office.
Billy walks around his desk, past Lee and out into the bullpen, where everyone begins to move again. The baddie who Francine shot comes back to life too. [he has five lives 😉 ]. Everyone begins moving again – it seems everyone knew this was a drill.

Out in the hallway though, Amanda is not getting up and is thoroughly confused. Amanda seems to be the only person who didn’t know it was a drill

I get this is part of the gag and all – but this is pretty darn mean of the agency to do this to Amanda – she isn’t being paid enough to deal with this stress!!!
Before I finish- here is a meme I created from this part of the episode.. there’s a gif version of it over on Neds. I felt Lee looking in the mirror deserved to be teased! 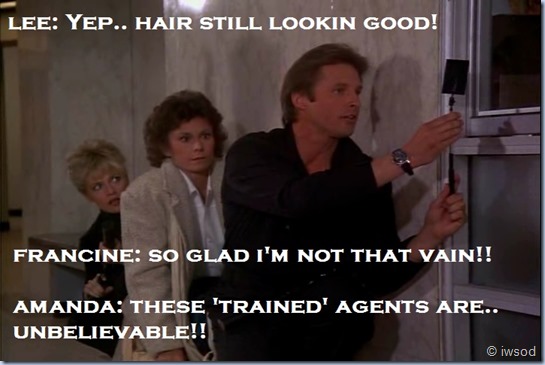