Welcome everyone, I’m CindyDee and I am honoured to be your host at this very prestigious awards ceremony.

It’s that time of year again, Just Walk With Me has wrapped up an amazing (and sometimes frustrating) second season.  From the highest of the highs and the lowest of the lows **coughCLASSACTcough**, the one thing every episode has in common are baddies that our dynamic duo have to outwit, outsmart and outdress.

The Golden Teacup Awards celebrate all the goodness of the baddieness of Scarecrow and Mrs. King.  These are my picks for the top 5 baddies of Season 2.  My criteria for the awards are simple.   The Golden Teacup winners are baddies that I have enjoyed watching and would like to see more of.  So even though Sinclair (Brunettes) is a seriously bad, sleazy guy, I don’t enjoy watching him so he’s not going to make my list.  So Ha!  YMMV.

1. Inga (Kristina Van Eyck) – The Times They Are a Changing

The smartly dressed Inga lays to rest the BadlyDressedBadGuy stereotype we saw in season one.  (Seriously, Francine should be raiding her closet).

Such delicious over the top bad gal goodness.  I was fascinated with how well her character was developed and the range the actress was allowed to show.

She was generous and willing let others take a turn. –“Maybe you should kill him now”.  And decisive– “We’ll kill her now.”

Not afraid to take initiative — “We’ll kill her first and get the Baron’s permission later.”  And not sexist — “Why don’t we kill both of them?” (Amanda and Haddy)  No gender bias for our lovely Inga here! 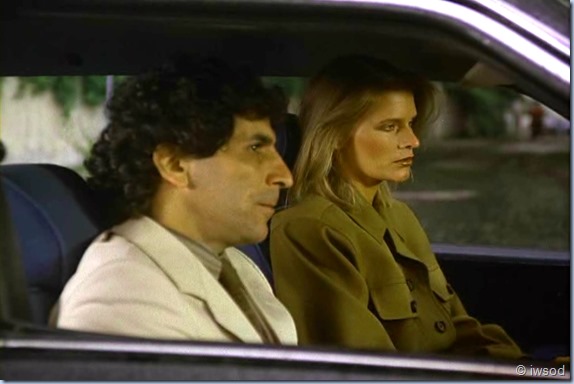 She also wasn’t afraid to show her vulnerable, pleading side — “Let me kill them!” 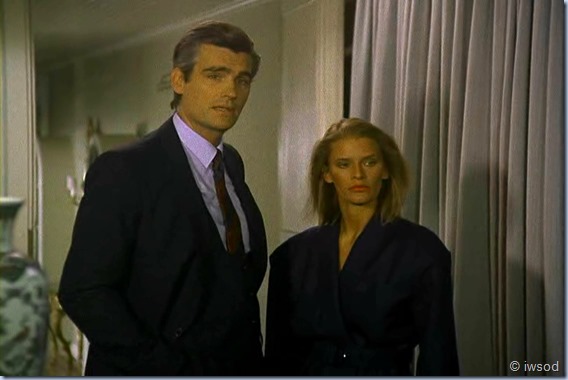 When you think of it, the episode (and series) would have been much shorter if the Baron had let her simply kill our dynamic duo (and get her early Christmas present) rather tying up our heroes and leaving them within hopping distance of his precious Ming vase.

Now, before you get the idea that sweet Inga was just about killing, she showed her helpful nature by asking Lee if he lost his way at the staircase.

People may argue that since she immediately knocked him on the back of the head with her gun, this negates her altruistic gesture, but I contend that since she was really careful not to hit Lee in the face (not the face!  Thank goodness, not the face!) and hit him in the perfect spot so he would not bruise his face or muss his hair as he tumbled down the stairs, she does have a soft spot under her brusque exterior. 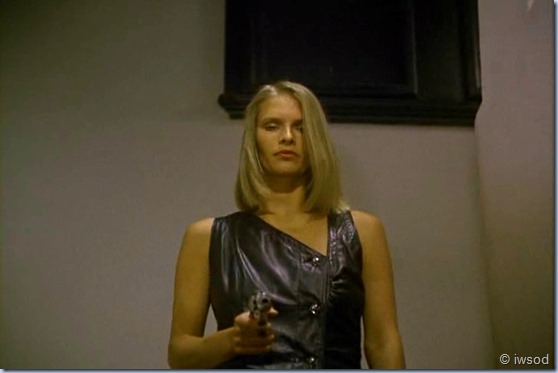 She cemented her position on my list when she threatened to do something anatomically impossible to Ortiz with that horrid flute.  This had nothing to do with fact that my daughter’s music teacher has been exhorting her students to ‘practice and practice lots’ on their recorders AT LEAST AN HOUR EVERY SINGLE DAY.*TWITCH* I think Inga showed remarkable restraint with only threatening Ortiz’s ear (this is a PG show, after all).

2. Robert Castille – Vigilante Mothers played by Daniel Davis (best known for his pivotal work as Niles, the butler of the Nanny fame).  I’ve always been a huge Daniel Davis fan and was shocked to find out he is not British but an American raised in Arkansas.  As Robert, he played a brilliant and convincing psychopath — as several of you pointed out, his character became an interesting counterpoint to Lee.

Robert was cold and ruthless, yet he was able to hide his true nature and become whatever the women he was using needed and wanted.

I think he differs from Alan in Artful Dodger in that for Alan, it really was about the money and everything and everyone was merely a means to an end whereas for Robert he really enjoys manipulating women and being in control. 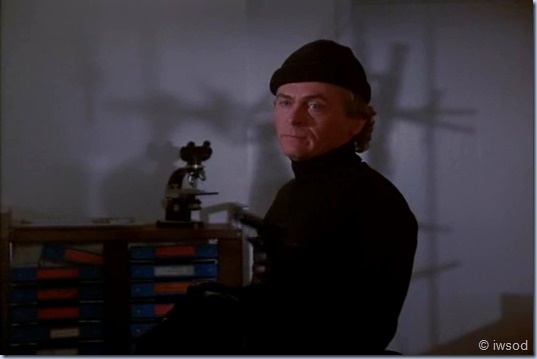 He is a harbinger of more complex and scarier bad guys to come in the following seasons and despite the huge plot holes in Vigilante Mothers Daniel Davis made a very compelling and believable bad guy. 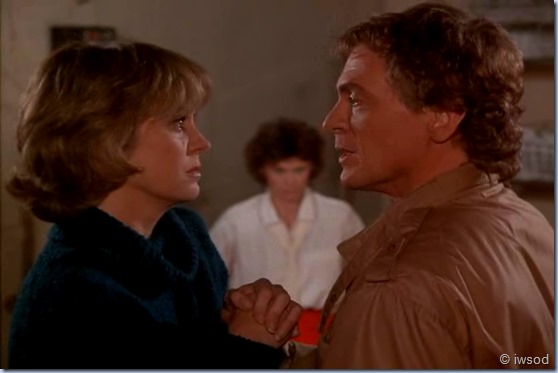 His Steam Soliloquy in the drycleaners gave me chills.

The powers that be must have loved him so much that he gets recycled as Tony Martinet in season 3 who becomes the manipulatee.  Full circle Robert/Tony.  Full Circle. 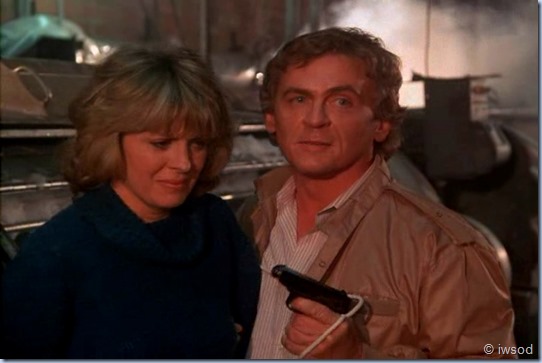 Frankie: I’m a sad man today, Vic. I hardly got to know your brother, and now…
Vic: Mr Columbus. 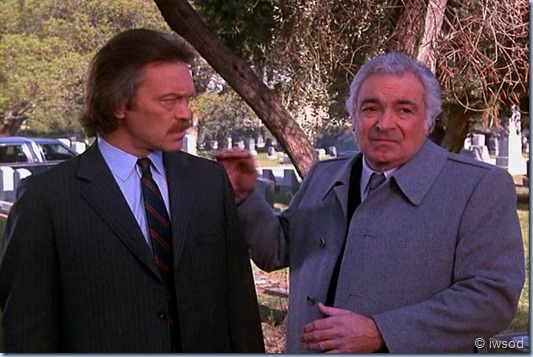 Frankie: Paulie, fix the wreath. Make it look real nice. I wanna talk to this man here…..Oh, Vic, believe me, I wish I could do more. I can pay my respects, I can err… leave flowers as a token, but I can’t do what I’d like to do.
Vic: What’s that, Mr Columbus?

Frankie: I can’t turn back the clock, make things right with Malcolm again. Look, Vic. I know this ain’t the right time for me to say this to you… but I told you this might happen. This is what I feared the most. That day in my office, I warned you. I warned you someone was gonna try to muscle in. Didn’t I?
Vic: Yes. Yes, you did.
Frankie: Now, here you are. Here you are without a brother. You’re alone and still you got no protection. 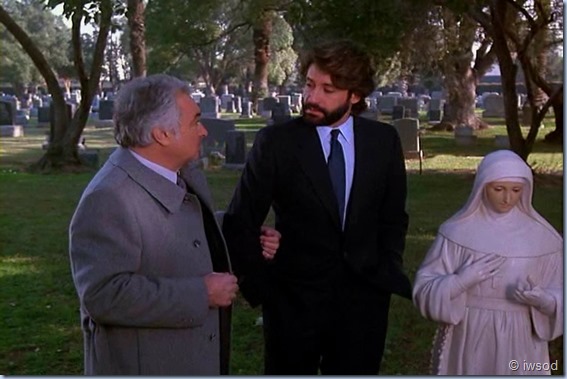 Sure it’s stereotyped, but so much fun!  Yes, Malcolm’s death was a little graphic by SMK standards (if you believe in karma, it was deserved), but Frankie lived by his own code of honour (warped, yes – but consistent in its own way) and I enjoy watching him.

I like a villain who is hands on and generous (and even though I don’t eat veal, I don’t think it would be wise to refuse Frankie’s gift of meat).

Of course I appreciate the skill that Frankie showed with the knife — slicing open Lee’s shirt and slicing that ugly tie without nicking our hero’s gorgeous, smooth, perfect abssssssssssssssss .

Oh yes, Lee’s abs,…….. Hmmmm wait!   What was I saying?
Oh yes, Frankie Columbus.   Great baddie!  Another recycled actor as he has gets to chance to stretch his acting chops and play the (stereotyped) Russian Rostov in season 3.

Proof Amanda really is in denial — no mention of how 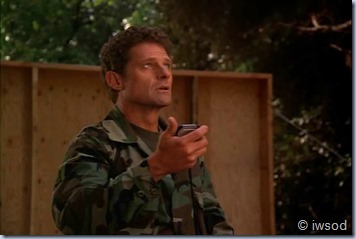 suspiciously similar Glen looks to her ex Joe.  Unless it’s been so long since he’s been around (I don’t think he is in running for dad of the year) that she’s forgotten what he’s looked like. 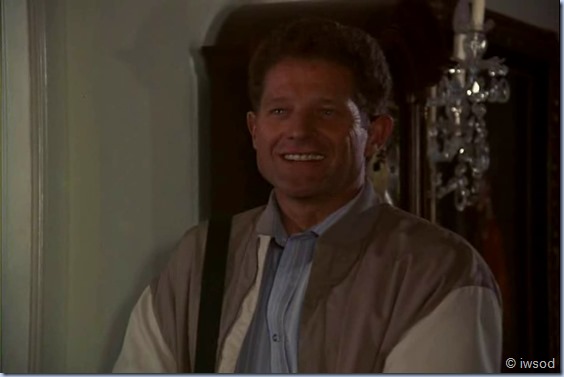 For a bad guy — he’s pretty harsh — not only does he stab his business partner in cold blood in front of us!  he has magic skills — he able to hold the steak knife with just enough force to stab poor Byron “He’s a Great Guy” Jordan but not too tight to smear Amanda’s fingerprints from the handle.  Now that’s the hallmark of a real pro!

The female doppelgänger of Howie Mandal (back when he had hair), she is one of the more nasty villains.  Pimp, blackmailer, lobbyist, and murderer — what can’t this ‘not-a-lady’ do?  I love her confidence 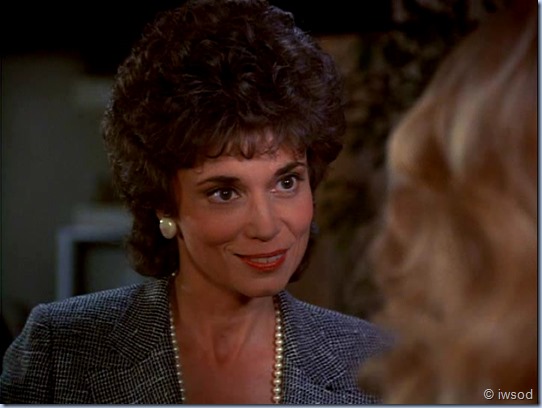 – I don’t think I would have been able to hit on our gorgeous spy Lee with that hair-don’t (I’d be hiding around the corner) and I love that she gets involved.

Once she realized the numbskulls she was working with were pretty useless, she takes matters into her own

hands.  And I learned something from Rita (other than a mullet is always a really bad idea!) – a purse can be quite useful.

Normally I curse my purse as it causes all sorts of neck and back problems because I magically end up carrying a bunch of my children’s crap oops!, I mean treasures.  But, because of Rita, I now know that I can carry not one or two but THREE smoke bombs, plus a gun and some lipstick along with my wallet, hairbrush and Tic Tacs.  Much harder for a guy to haul those things around without being noticed.  Yeah for GIRL POWER!

TEST YOUR KNOWLEDGE ANSWER:  Darned if I can tell the difference!

I debated whether to put this in the top 5 or in honourable mentions because as a villain, Karen is kind of lame (as all evil ‘twins’ are,) but you have to admit that she is a very dedicated assassin. 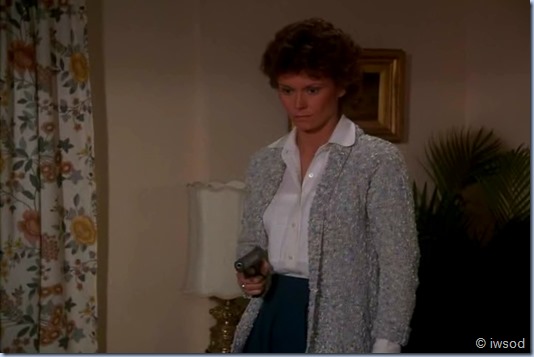 Not only did she undergo surgery to look exactly like Amanda but she also duplicated her wardrobe down to the last fugly earring.

I hope she was compensated extra for the psychological trauma.  It was kind of weird that a woman who has so many kills under her belt would balk at getting rid of her double and leave it to the mealy mouth Gordon, but I guess shooting oneself would be kind of unnerving. 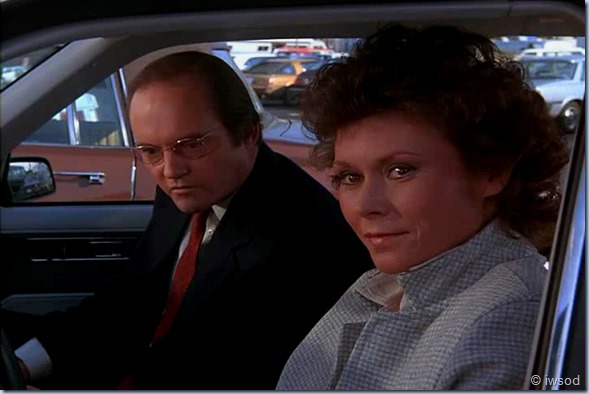 (the gal would reek of booze and cigarette smoke **COUGH**), but I will give her a pass because I am assuming this is the first time she is assuming someone’s identity.

I do have to give a shout out to how good Kate Jackson is in this episode.  As was mentioned somewhere else (and I wish I could take credit for this observation!)  KJ plays three distinct roles:
Amanda,..

and Karen pretending to be Amanda.

And by randomly looking at screen shots from this episode I can usually pick out which character KJ is playing.   The tipping point to include Karen here came when I realized that the majority of the Golden Teacup winners also had other roles on SMK so including Karen was a logical choice.

Yes, I know there are now six Golden Tea Cup awards, but I have been gritting teeth helping my daughter through the ‘new’ math where the emphasis is on estimating rather than getting the actual answer, because, heaven forbid we actually make math OBJECTIVE.  It isn’t as if any careers (like a pharmacist, accountant, baker, chemist or engineer) would actually need precise measurements and exact calculations.  INSERT EYE ROLL HERE.  So if 6 is close enough to 5 (and by using 3 different strategies!) for the board of education, it’s good enough for these Golden Tea Cups.

I’ll be back with more baddie awards in the next post.