Although season 2 starts off a little slowly in terms of Amanda’s professional growth IMHO, it ends up being an extremely formative year for her and full of growth by the end.  Her world is expanded to Europe, where she is equally successful at applying her intuitive and every day, “normal” smarts.  And despite suffering some setbacks in OMIT and ACA, she continues to watch and learn from Lee and never totally gives up her desire to work for the Agency and to maybe become a full-fledged agent someday.  Her bravery never falters, and she always manages to help Lee in some crucial way in every case.

Thanks again to iwsod for granting me permission to use her lovely screen caps!!

I am following the JWWM revised season 2 order, not the original airing order. (See Nedlindger’s for this discussion.. JWWM has discussed the season 2 order throughout the walk, but will eventually publish a post on it and bring it all together! 🙂 )

In the first four episodes of season 2, we see Amanda in some very different assignments than she’s had before.  She even gets to travel to Europe for 3 of them!  By now both Lee and Billy are aware that Amanda does bring value to the Agency and to Lee, and they have begun to have some level of trust in her.  Although she is still part-time, she has definitely become an accepted part of the Agency.

In Mongoose, Billy sends Amanda to Europe on her own to identify an 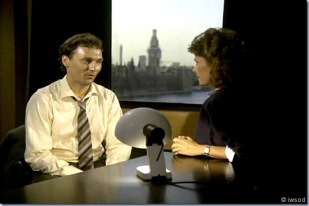 old high school classmate of hers.  And although Connie Barnhill’s crush on Amanda helps loosen his tongue, she shows she knows just the right way to get him to talk when Lee’s good buy/bad guy technique fails.  Even Inspector Keaton thinks she’s pretty good!  And 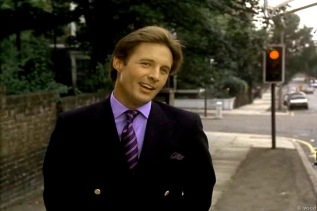 in the end, I think Amanda even earns a bit more of Lee’s respect for her intuition when he admits that she was right about Connie.

Remember that trust capital I talked about in the last post?  Well Amanda gets to spend some of it in the next two episodes.  In TTTAAC, Amanda gets to go back to Europe to be a messenger. 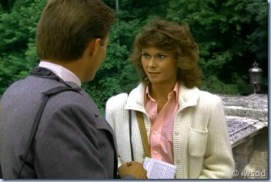 Although the Agency does trust her to deliver the messages, she is not trusted enough to be told that up front.  She is not happy about that, but according to Lee, it is for her own safety.  Amanda is successful

at delivering her messages.  Billy rewards her by letting her go to the Baron’s soiree and even makes Francine lend her an outfit. Lee even gives her a little job at the Baron’s party when he asks her to “get rid of the woman” so they can talk to the Good Will Ambassador.  Amanda doesn’t look very comfortable with this, but Lee knows she can do it.

And in the end, Amanda’s every day smarts and bravery are on display as she is the one to figure out the Baron’s target and insists on

going with Lee to the Glockenspiel where the attempted assassination will be because her family is there.  Job well done, Amanda!  And right in front of Billy and Francine, too!

In Double Agent, we are back in D.C. where Amanda shines again.  Although the premise of the episode is that the 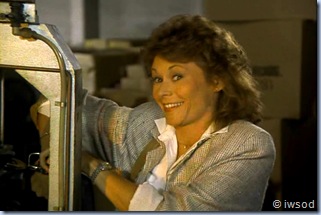 And it is Amanda who saves herself and Lee in the burning warehouse when Lee has no plan of his own.  Once again we see how Amanda’s everyday smarts play a big role in a case.

I also think this episode shows that Billy especially sees Amanda’s abilities and her bravery, and so he lets her decide for herself to do the baddies’ bidding instead of using Francine.

In TLODG, we have a new twist.  Amanda is brought onto an assignment by Emily Farnsworth – not Lee or Billy. 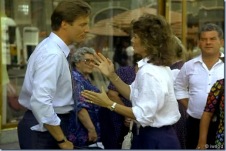 Amanda’s keen memory and awareness of boys’ magazine puzzles help point Lee in the right direction.  She doesn’t falter when having to jump in the lake at the Castle on 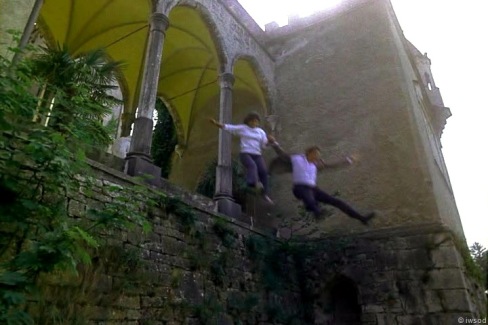 the Lake and she looks pretty 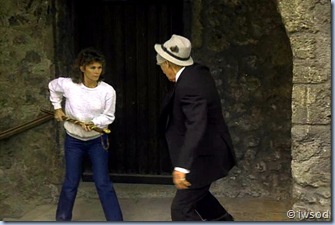 fierce with Dr. Hanover, preventing him from even trying to escape.

head.  She learns from Lee that she can’t take to heart what happened to Marianna or blame herself in any way for it.

I know ACA is not high on anyone’s favorite episodes list, but it does reveal two very important things to everyone with regard to Amanda’s career: 1) she is nowhere near ready to be considered for agent training with such things as guns, zip lines, and car chases, and

2) her most valuable assets to Lee and the Agency are in her intuition, memory, ability to make connections that none of the agents see because she is “normal”, and in her bravery, as we see exhibited once again when she goes back to Dodge City to tell Lee about Peggy despite the danger.

Not withstanding the training fiasco in ACA, Amanda is given two more European jobs.  The first is a big solo opportunity to be a courier in OMIT, and the second is as part of Lee’s cover in AABH.  Although OMIT is arguably one of the best Lee eye-candy episodes, it is another learning opportunity for Amanda.

Disappointingly, she ends up in jail for counterfeiting and Lee is very unhappily sent to bail her out.  We do get to see her use her proven skills though, with her intuition telling her that a milkman just doesn’t

seem like the right person to be running a counterfeiting ring, her noticing the “weird boat” on the lake, and getting Old Gunther to talk.  Bromfield Hall is much the same, where we see more of Amanda’s luck and knack for being in the right place at the right time benefiting Lee and the case.  It is a good thing Lee gave in to Amanda’s insistence to 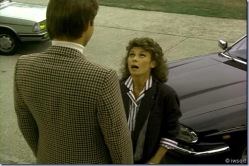 stay on this case instead of getting sent home, otherwise he might never have survived or caught the bad guys.

Do you remember this scene in TACMK? 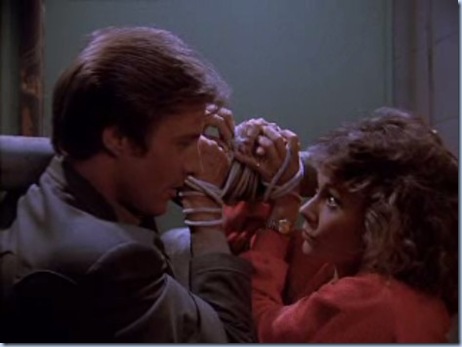 This is when Lee tells Amanda that he learned you can’t look back in the spy business.  I think Amanda must have taken that to heart, because despite all the setbacks and Lee continually trying to keep her out of harm’s way or send her back home to her children, she never gives up believing in herself and fighting to be allowed to stay involved in her and Lee’s cases.  I love iwsod’s screen cap below from AABH, which clearly illustrates that she just can’t help but believe she offers something valuable to Lee. 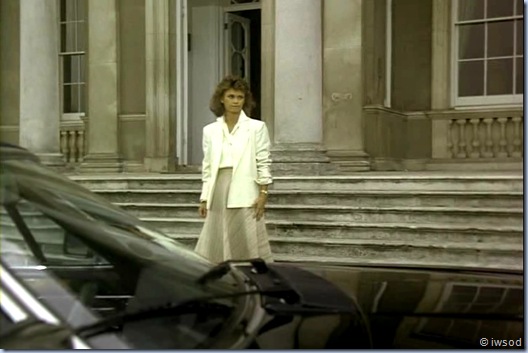 I think this is also one of her best qualities even though it takes Lee and Billy a while to realize it.  It also helps her impress both Lee and Emily in the next episode.

In TTFOE, Amanda gets involved because the Agency’s safe house burns

down.  Her dining room is turned into the Soviet Embassy, and despite not knowing what to think initially, Amanda acts like a pro and goes with it – no whining, no complaining, and no looking back.  We witness her bravery again in meeting the two baddies for a second time, and she even helps Emily with her accurate arm.  It never really comes up again (at least I don’t think it does – and I’m sure someone will point it out if I’m mistaken), but I think Emily must somehow inspire Amanda, 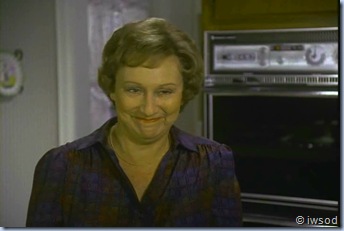 especially after she learns Emily got involved in the spy business similarly to the way she did.

BAI is a huge episode for Amanda professionally.  I think Billy rewards 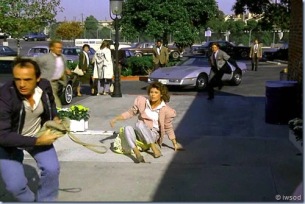 her for a job well done in TTFOE with another solo courier assignment.  Although it is not her fault the microdot gets stolen, she and Lee have a huge fight and she decides to resign from the Agency. 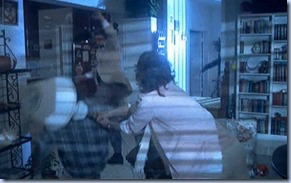 We see her intentionally take out a baddie (a first?), unlike accidental times in the past (think Peggy in ACA or Inga in TTTAAC), and it even impresses Lee enough to brag to Francine about it.  In the end, Amanda decides that she is proud of her job and wants to stay with the Agency. 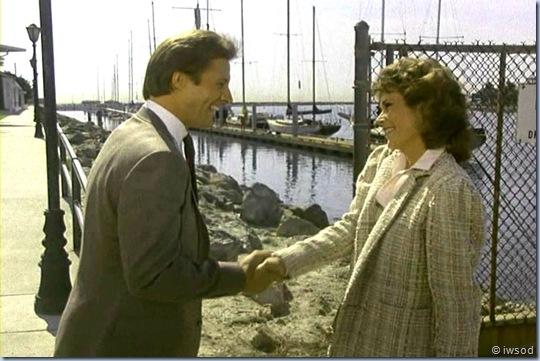 She even earns the title of “partner” from Lee.  Amanda’s proven her loyalty and dedication to him as well as saved his life by watching his back and helped to solve his cases.  Despite her status as a part-time, untrained civilian, even Lee can no longer deny her usefulness.  Or that he likes working with her

This is all I can manage to say about CW. 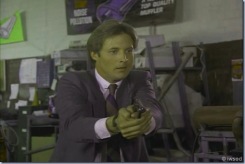 At least Lee lets Amanda know he sees that she saved him once again.  She’s earned that.  I’m sorry CW fans, but other than that one lovely scene at the phone booth and Billy’s face when he tells Scarecrow to “break” Mario, I think this episode is in the running to be #88 out of 88 on my list.

I’m going to end this post here.  There is no way to do justice to the second half of this season and keep this post to a readable length. 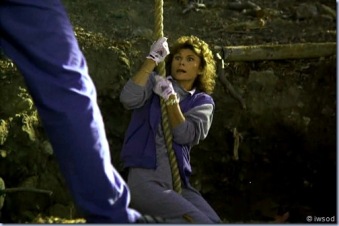 I suppose I could have skipped the first part of season 2, but it think it’s important because it shows off Amanda’s persistence and ability to fight through the hard times but still learn and grow from those experiences at the same time.

Well, what do you think about Amanda’s growth so far in season 2???  Am I being too hard on her?  Not hard enough?  Was Billy wrong to send Amanda to Station 1?  Was it just payback to Lee for his attitude about going?  What most impressed you most in season 2 so far?  What do you think are Amanda’s best qualities as it relates to the job?  I’d love to hear your thoughts on this!!  I’m definitely biased!  Thanks for reading and hope you enjoyed some Amanda focus!  Stay tuned for part 2 of season 2!