1/15 Season Three, Episode 17: The Eyes Have It -Scarecrow and Mrs King

Ready to move on? It’s been aaaages since I’ve seen it and I’m looking forward to walking through it with you all!
Firstly- Huge thanks to Jenbo aka Bitsy Beans for transc

ribing this episode – I really, really appreciate it Jenbo-  it is a huge help- thanks for your help!!!
(thanks Learjet for formatting it to help me out too

This episode opens with a natural vista… just like the last episode.. only this time we’re on the coast..

Anyone recognise this?
Is St. Marie for real? I’m thinking not.. but the French West Indies are.. am I on the right track?? We hear some Caribbean music.. and see some quaint street images.. 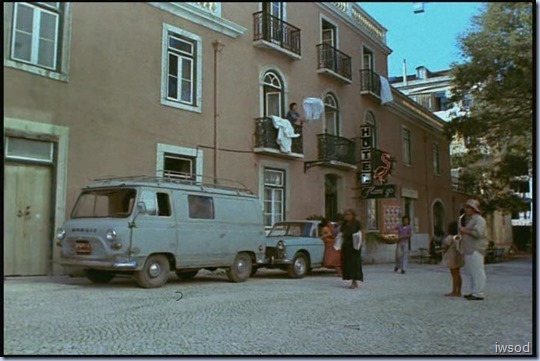 Next thing, we see a ceiling fan. The shot widens to reveal Lee searching a hotel room while a man is tied to a chair.. whooo a white suit.. is it polyester and does it travel in time? (like in Playing for Keeps?)

Looks like they are trying to convey how hot it is.. I do wish Lee would take off that jacket.. Not liking this white suit at all..

Lee: Come on, Moss. I am getting damn tired of playing games. Where is the list?
[Ahhh there Lee goes with his amazing interrogation techniques – I’m tired of you lying. tell me now because I’m tired. ahem.. ]
Lee: I know you’ve got it. You know how I know? Spaulding told me just before he died. 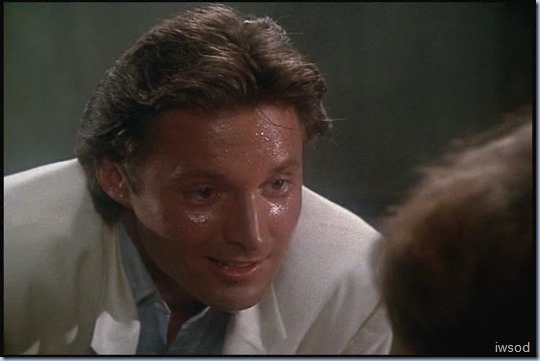 [Anyone enjoying sweaty Lee? Me? meh.. not so much.. I think it’s a little overdone.. I think I would have enjoyed it more without the jacket!]
Moss: I wish I knew what you were talking about.

Lee: Look pal you’re gonna be making a lot of wishes if you don’t start talking. Now where’s Barnstorm? Huh?
[So Lee is looking for a list. A ‘Barnstorm’.. ]
Grrr Lee is getting cranky.. has his white cranky pants on!
He gets a bit rough with Moss’ shirt there.. ahem..

He studies Moss for a moment..
then he seems to make a realisation.

Lee reaches for a nearby lamp and brings it close to Moss’ face.. uh oh.. is Lee going to start actually torturing this mossy dude?

Love the close up on Lee here.. It’s like for a moment he is in an action adventure searching for the Lost arc or something.. 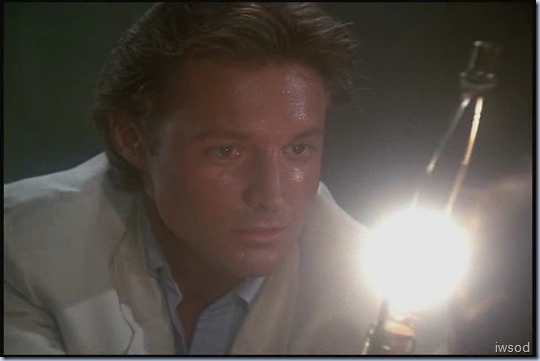 Just for a second.. If I can blot out that awful white suit..
Nope.. he just waves the lamp in front of Moss’ face..
And we see a close up on Moss’ eye.. SMK loves to do weird stuff with eyes!

That baddie Sinclair with his contact lenses still gives me the creeps! [Brunettes are In]
Lee puts the lamp down.. suddenly rather pleased with himself.

Whoa.. what comes next is pretty brutal stuff.. I’m getting a sense the grittiness we noticed in The Triumvirate is still present.. maybe here to stay?… hmm.. I guess I’ll see..[haaa get it ‘see’!]  I am not a huge fan of it..
Still, it wouldn’t be right if I didn’t share an image of what happens next – ewww! Cast your ‘eyes’ on this! 😉
With Moss out cold, Lee pulls his eyelids apart.. Ewwwwww!!!!

Not sure why.. but Lee is happy about it, and it brings him closer to the list he was after I guess.. I seriously do not remember.. I think it’s probably been  a good four or five years since I’ve seen this ep…or any of the remaining season 3 episodes! Whoo hoo!

Moving on to the airport, and Lee is seen being escorted out of customs…
Customs official: We apologise for the inconvenience, Mr Stetson but, uh, you understand.

[Lee is travelling under his real name?! Hmm..okay..]
Lee: Thank you.
Customs Official: These searches are conducted purely at random.
Lee: No harm done believe me. So au revoir, huh?
Lee turns away looking extremely pleased with himself.. he seems to have gotten through customs with ahem.. Moss’ eyeball..haaa

The customs official walks over to a man in grey to report back about this not so random search.

Neumann: Neumann speaking.
Moss: Stetson got to me. He has the list.
[ah.. Look! Moss still has two eyeballs.. I see! whahahaa.. just how many eye puns can we fit into an episode guys?! I guess.. we’ll seeeeee!!!] 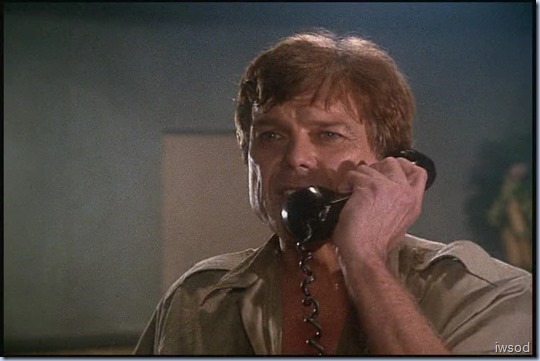 [Phew.. I’m also glad Lee left Moss alive – but he could have at least tied him up so he couldn’t make phone calls until Lee got out of the country?! lol. Rather ‘short sighted’ of Lee!]
Neumann: That’s impossible. We had him searched before he got on the plane.
Moss: The list is on a pair of contact lenses. He’s probably wearing them. You’ve got to stop him.
[Ahhhh contact lenses.. My goodness SMK loves contact lenses.. we’ve had three creepy eye moments with them now – Sinclair as previously mentioned, and Francine’s Magda moment..]
Neumann: Telephone Washington and arrange for someone to meet me at the airport. I’ll deal with Stetson there.
Moss: Yeah.
They hang up. [Is Gunther Moss suppose to be German? His accent is quite convoluted.. ]

Back to Washington and Amanda is doing paperwork in the bullpen (not in the Q bureau huh..)..
That look with the full skirt, cinched in waist and shirt screams Victorian to me – the only difference is the skirt length. 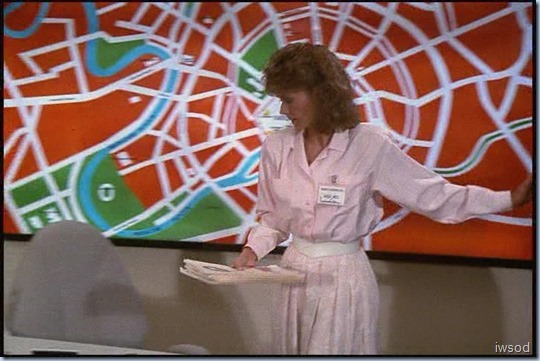 Amanda has the figure to get away with it.. and considering some of the monstrosities she wore in season 2 I can’t complain too loudly.. and I do love Amanda in pink

Amanda: When did you say Lee would be back from….where did you say it was?
Francine: I didn’t say anything. I don’t know.

Francine walks off quite pleased to have seen through Amanda.

[Aie! Amanda should know that wouldn’t work with Francine..  I think it’s possible Francine does know, and she’s just not telling – because she likes knowing something about Lee that Amanda doesn’t..then again.. maybe not!  IMHO-  Amanda must be really missing Lee!

We haven’t seen this before have we?! ]
Amanda sighs.. she’s antsy.. And lol what’s with her tiny little desk?! No computer? hmm.. guess this is not her usual spot. 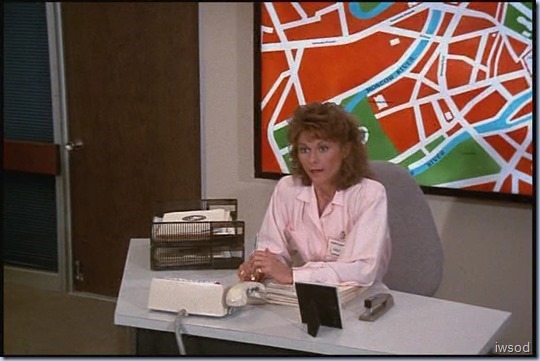 Amanda  isn’t ready to give up getting the intel. She gets up and heads to Billy’s office giving a new cheery knock on his door.

[ahhh Billy.. he gives a quiet little knowing smile – me thinks we are all doing the same thing as Billy right now 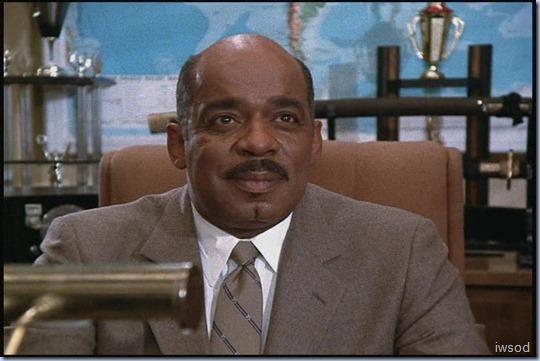 …Sir, you know I know better than to ask any questions, sir, and normally I wouldn’t  because normally I would be able to just keep my ears open and I’d be pretty well able to pick up on was going on but not this time sir. It’s been three days and I haven’t got a clue.

[lol no attempts at subterfuge with Billy.. she’s pretty honest with him I think

]
Billy: Amanda, something occurred out of the country. Lee barely had time to pack a bag let alone fill us in with the details.

[That must be why he was wearing that awful white suit.. he packed in such a hurry he didn’t look at it properly!]
…It happens all the time. He’s all right. He made his status checks.
Amanda: Thank you, Sir. It’s just not like Lee to drop out of sight.

[Sight. Hmmm..  another reference to eyes… Let’s ‘see’ if all these eye references will ‘show’ us something about Lee and Amanda’s story this week

Hmm this is a new experience for Amanda.. wondering where Lee is and what he’s up to.. I had in mind that Lee would often drop out of site throughout the time Amanda has known him – she says it’s not like him. but I think it’s because of her new view of Lee she is now seeing things differently – she’s going to need to get use to this huh?!]
There’s a knock at the door..
Billy: Come.
It’s Francine with new intel.

Francine: Just came in on a coded relay.
Billy: It’s alright.
Francine: All right, well, Lee is on Flight 445. He’s coming in from Sainte Marie. And he’s requested a pickup. 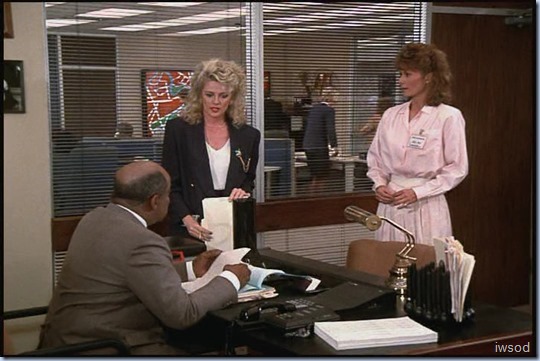 Billy: What’s his status?
Francine: No problem, A7. He’s going to be at the South Terminal Level Three at 4.00. Shall I send somebody to pick him up? 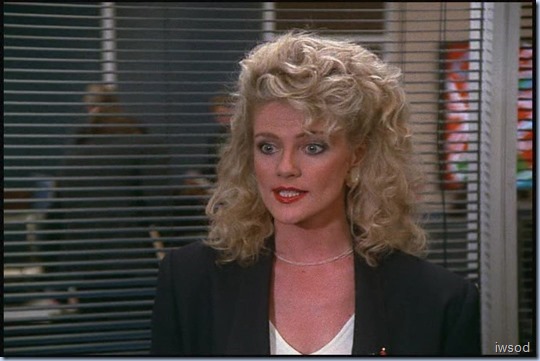 [That necklace is quite restrained for Francine.. I can’t get a good look at that brooch.. maybe later..
Gee.. Just who could pick up Lee?!

[I love how she says this rather understatedly.. Of course.. Billy sees right through it

Billy: Are you sure it’s no trouble? 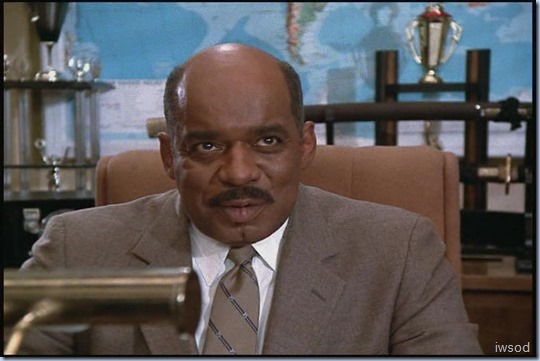 [That trophy behind Billy? is for being the best matchmaker in the spy biz

]
Amanda: No problem, sir, no trouble at all…

…In fact I would probably be heading out that way this afternoon. See you later.

Amanda makes a quick exit.. lol.. is it close to 4pm? Or is she planning on getting out there early?

Billy is enjoying watching Amanda pretend she isn’t excited to be seeing Lee again.. she was going to be out there anyway? rofl!

Francine gives Billy one back.
Hey – at least her look is no longer ughhhhh!!
Not sure what to make of it.. guys???
There seems to be some resignation here.. or acceptance.. even if she is not terribly thrilled about it like Billy is

We see Amanda’s car leave the magical IFF car park..
LOL the music seems very upbeat  – fresh.. All seems to be signalling to me that big changes happened in The Triumvirate.. Lee and Amanda? They’re happening!!! lol..