11/15 Season Three, Episode 19: The Boy Who Could Be King- Scarecrow and Mrs King

Back to Lee’s where Amanda, Sandra and Terry have been waiting since Amanda got the would be kidnapper, beige guyovski, with the chocoblocko shake.

We see an exterior shot of Lee’s apartment..

and zoom in
[LOL it always feels a bit like a game show when they start zooming in, because I can never quite be sure where they are going to zoom in on! Is Lee in apartment 8?! You win a prize!!] 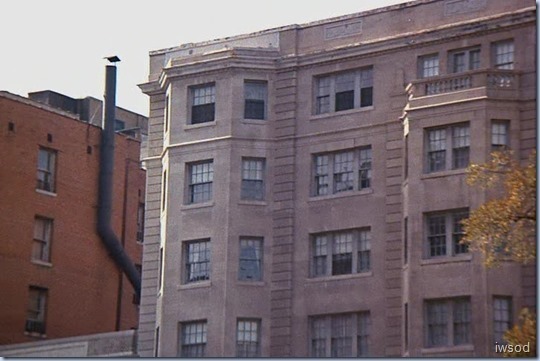 This time, it zooms to the top left corner apartment. LOL I would have thought being on the top floor is a security risk..[along with that key under his potted palm!] Was this the same apartment Lee was living in last time we saw this? or has he shifted again to keep the pesky baddies on their toes? Sadly, no time to look this time. Anyone? There’s a post coming up soon by SMK fan Silver Corvette which will walk through Lee’s apartment !! Stay tuned it’s coming!!!

We find Lee and Amanda in Lee’s bedroom. Oh drat.. Sandra is in there too

but oh my.. look how far Amanda has come. I don’t think she ever would have entered his bedroom with him, much less sat on Lee’s bed in season one!
Nice touch.. Lee does weights.. hoo haaa.. why didn’t we get to see that?! *the imagination fills in the gaps!!!*

Sandra Wall: To make a long story short, Edmund Spencer is my former husband. Terry’s father.
[Thanks for that. Lovely and short. Moving on..okay maybe that’s not the whole story!

I had completely forgotten they were married. I figured it had been a fling.. Is it just me or is it a bit bizarre that they were actually married? Maybe this is my modern eyes seeing things differently here, and a fling and baby out of wedlock for the woman who we are suppose to like in the 80’s was a step too far?!
I think it’s a stretch that they were married but Terry is a secret from the world- A daytime soap actress marries a King? It doesn’t matter how small and insignificant the country or the soap was.. everyone would know about it. Even in the 80s before the internet! Entertainment tonight was around no?!

and I mean it’s so Grace Kelly/Prince Rainer!
Amanda: Does Terry know?

Sandra Wall: I didn’t want to complicate his life…

…As far as he knows his father was a musician who died shortly after his birth.

[I think I’d be more comfortable with her moving on with the child if it had been just a fling.. but they were married.. I can see King Eddy isn’t likely to win a father of the year award. but to totally lie to Terry? this is ummm.. gray territory here. I can see how having a dad who is a king complicates things though too. lol.. thoughts?]
Lee: Until now, the King hasn’t ever tried to contact him?

Sandra Wall: Oh sure, he used to phone every week begging to see him, and as hard as it was I always said “no”…

[Lee’s artwork is IMHO hideous! I guess Lee doesn’t use that line about come see my artwork whahahahahaaa!! heck, he doesn’t need to

sorry I digress!]
…I guess I was afraid he’d take Terry back to Cap D’Far… 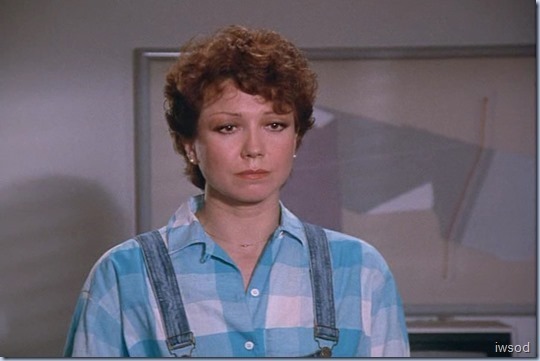 Amanda listens on without judgement.
[Me? I’m much more judgemental. Bad iwsod! ]

We see Terry in Lee’s living room, having just put on a jazz record of Lee’s.
Cool tie in.. Terry likes Jazz like his father.

[Lee has a Van Gogh book. cool! He should have put some Van Gogh on his walls!] Muffled we can hear Sandra continuing:
…When everything else fell apart, my son was all I had. I just couldn’t take the chance…
[Good to see Sandra facing some tough realities here. She’s not perfect. I like that she begins to face the truth- it wasn’t about Terry’s life being complicated.. it was about her own.. IMHO!]
Cutting back to Sandra, we see she is smiling and reminiscing. 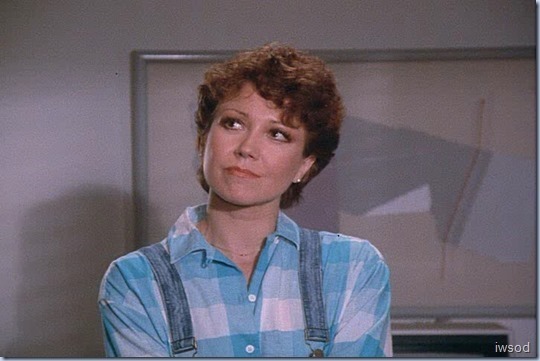 …Ah, Eddie was something. It sort’ve felt like a B-movie version of the Prince Rainier/Grace Kelly story… 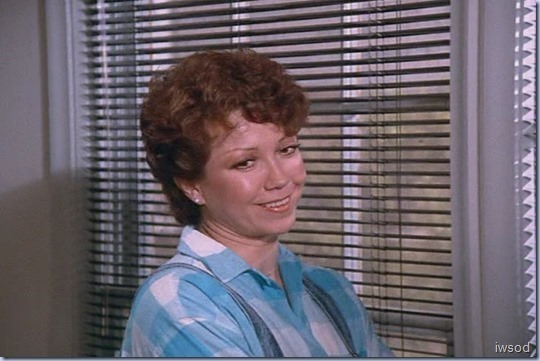 We also see Lee taking this in.. watching Amanda…

And enjoying the way Amanda is with others.

And if I’m not mistaken, he gives her a little glance up and down.

Checking out her legs again?!
[How darn sexy is it that Lee loves who Amanda is??!!!] 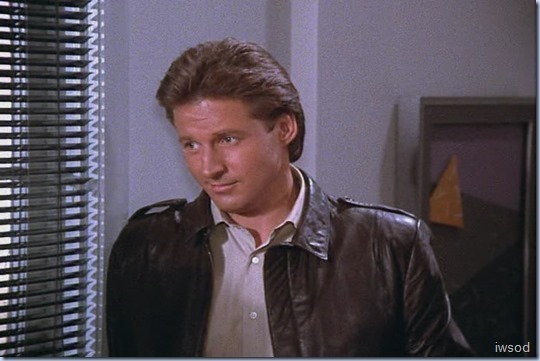 Lee turns back to Sandra.
This is a sweet tiny little moment that means a lot don’t you think? Great editing.. and such a subtle way to say much about the characters and what’s bubbling away just beneath the surface (now it’s no longer buried deep!). I cannot wait to hear what you guys have to say about this!

But.. back to Sandra and her B grade movie

funny.. this does actually sound like a hallmark movie!
…Terry was on the way before I set foot on Cap D’Far. 500 square miles of sand lizards and gull guano. That and a steady diet of Miles Davis sort’ve took the shine off the apple.

Lee: Listen, Sandra, Terry may be in very grave danger… 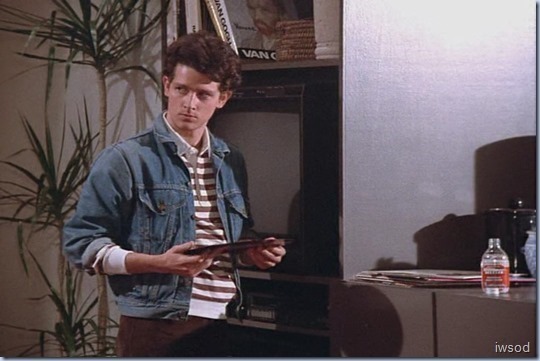 At this, we cut to Terry, seems Lee’s voice carries! Not a good trait in a spy

Lee continues and Terry moves closer to hear better : Now a metal called tantalum has been discovered on Cap D’Far. We need it for missiles and jet engines, but so do the Soviets. Whoever controls Cap D’Far can name his own price.

Sandra: What’s Terry got to do with this?  [Duh!! I get the vibe that Sandra is a bit of a dreamer.. she still hasn’t grasped the full reality of having married and had a child with a king- estranged or not]
We cut back to Lee. 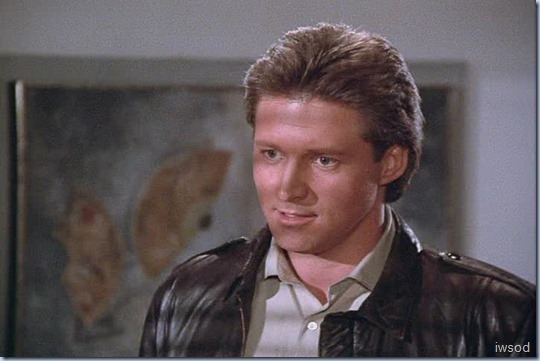 Lee: Everything. Terry is heir to the throne.
Sandra: No one has to know that.  [Aie! dreamer!] 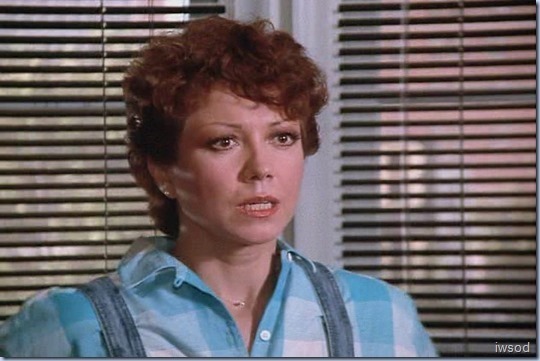 [She might have gotten away with it if she hadn’t told Eddy and no one ever knew!]
Amanda: I’m afraid they already do…

…Now, remember the dead man had Terry’s name in his pocket and they just tried to grab him at the hamburger stand. 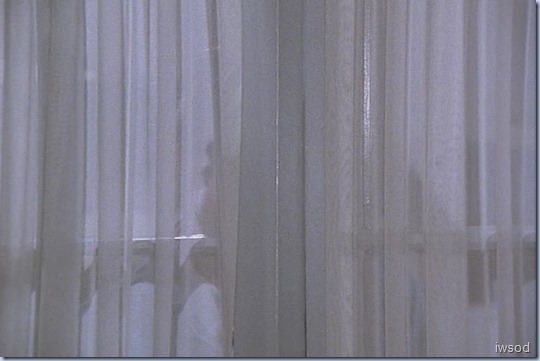 Sandra: He’s a boy, for God’s sake. [Aie.. seems reality still hasn’t quite sunk in for Sandra!]
We see Terry listening at the glass door. LOL can’t they see his flippin shadow?! 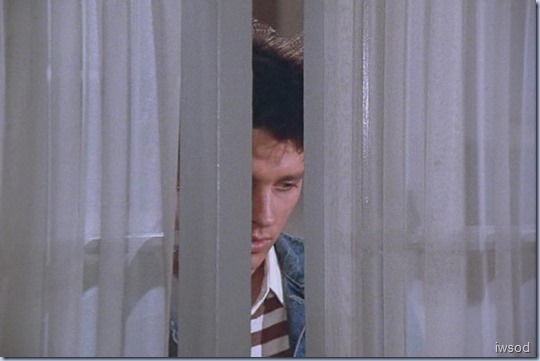 Oh and then Terry opens the door???!!!! rofl.
Now surely they could have noticed that!

Lee: And a Prince, whose father is a King who has a seat in the UN and an Embassy here in DC. Now Edmund wants Terry to wear that crown after he’s gone…[‘After he’s gone’. Lee comes dangerously close here to saying Eddy is dying] 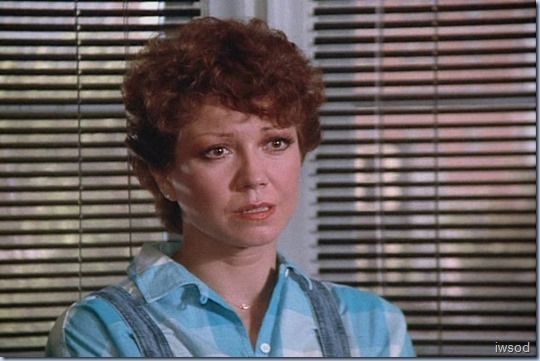 …That’s why he tried to contact him without you interfering.

They hear a door close loudly in the other room and go to investigate.

Whoooo see that?! The photo of Lee’s parents is still on his bedside table in that fugly frame

Sandra: Terry? Terry?
They silently look around… then head out into the hallway, 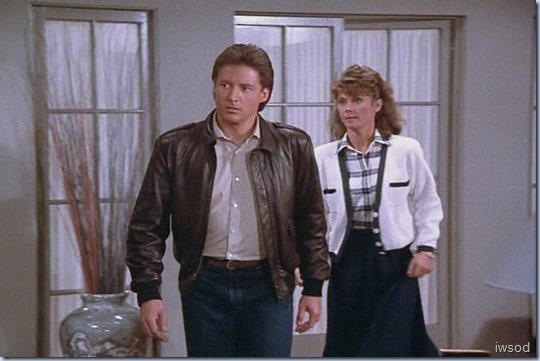 I thought the front door was to the left of Lee’s bedroom.. me confused..
They see the elevator is going down.

[Is that the ‘potted palm’ Lee hides his key under?! rofl. Amanda needs to give him a lesson in plants]

Realising Terry has run off.. Lee and Amanda share a look.

Then look back at Sandra. Uh oh.. 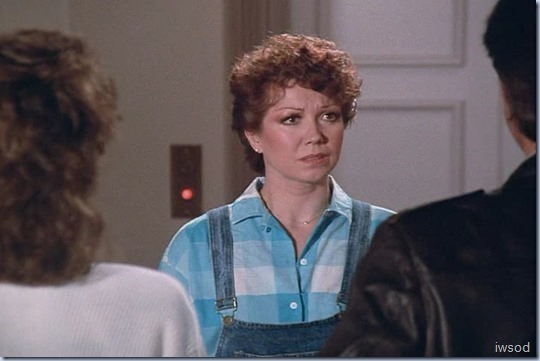 The scene ends here.
We get quite a good look around Lee’s apartment throughout this scene!

Time to pause and enjoy the view from here! Sooooo what do you all think of this part of the ep? or the ep so far? Thanks for stopping by and reading- looking forward to hearing any thoughts you’d like to share