12/15 Season Three, Episode 19: The Boy Who Could Be King- Scarecrow and Mrs King

Back to the embassy of Cap d’Afar.. aka the Guest Lodge Apts.
King Eddie: Some vitamin A for my saxophone playing spy?…
[Uh oh! that cat’s out of the bag!]
…Oh, you really had me fooled, Billy Bluenote.
[Awh he’s not BBN anymore?!] 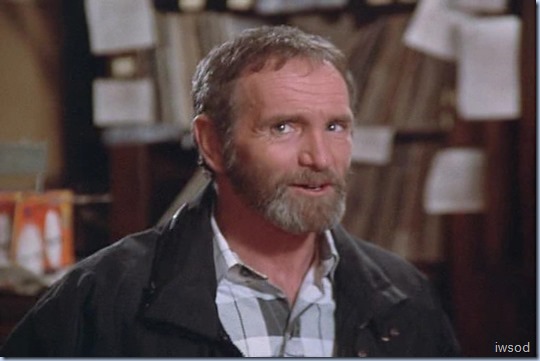 Lots of emphasis on the vitamin A.. random.. or… something yet to be revealed! for a guy who parties hard I’m surprised to see him pop his vitamins. Like he cares!

though lol I like how he downs it with some champagne!

Billy: It’s nothing personal, Your Majesty. Now, about the tantalum. You really didn’t know that it was discovered in your country.
King Eddie: Well rocks are rocks, man! Hey look, it must have been the engineers I hired from Colorado to look for water who found it.

Billy: Well then, why didn’t you get the engineering company’s Assay Report?
King Eddie: Everything from the States passes through the Embassy first.
Billy: Then your ambassador was the only one who knew about the tantalum!

King Edmund: Well sure, oh but Crowley’s George.
[Anyone able to explain what this means? ]
Billy: We’ll see. I’m having the Agency do a head to toe on him.
King Eddie: I thought I was leaving my son his heritage, and he ends up in this mess. This is not the way to become Father of the Year. [oh lol I just said something in the last post about that!] 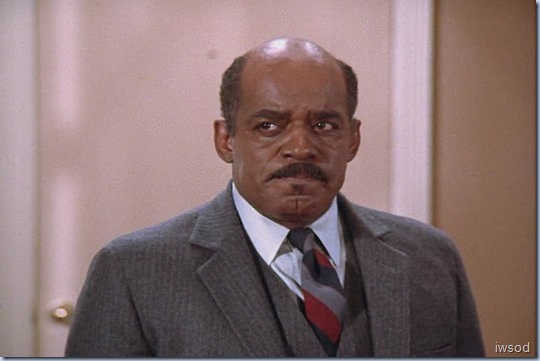 Billy seems to really genuinely feel for Eddie. If Billy likes him, I can’t dislike the guy!

Moving on we find Terry pulling up in a taxi..where isn’t clear.

Next thing we see the beige baddie with Crowley..
Soriakhof: You’re positive that agent saw the Assay Report?
Crowley: I’m not going to assume he didn’t.

Soriakhof: What is the American expression? Drop back 10 and punt.
[Umm I don’t know this one. can someone help me out?]
They round a corner.. and Crowley spots Terry arriving. Doh!! They’re all at the Guest Lodge Apts!
Soriakhof: We’ve been dealt a better hand.
Crowley: Or we could dig in and take them both out.

Back inside the ’embassy’.
Billy leaves, 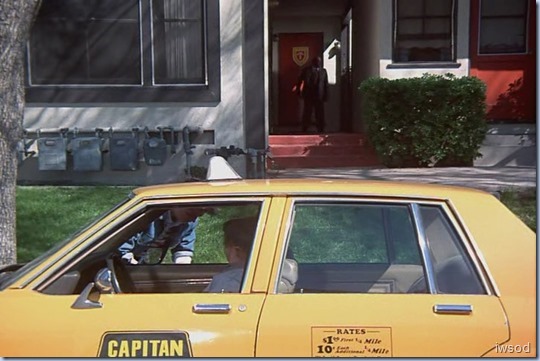 Just as Terry fusses with that taxi driver. Lol Terry is there for a while.
Just after Billy has left, Terry walks up to the embassy..
We see Crowley open the beige back sliding door with a grin.. an evil grin! Seems Crowley has an evil beige plan!

In the embassy, we see Terry open the door.. No knock. He finds Eddie playing his trumpet at the window.

He’s playing something sad.. maybe thinking of his son.. 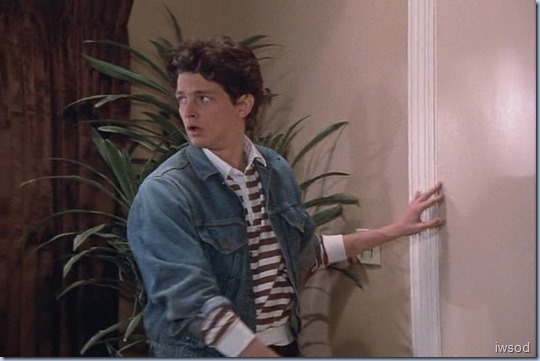 meanwhile his son sneaks into the room unannounced and watches. 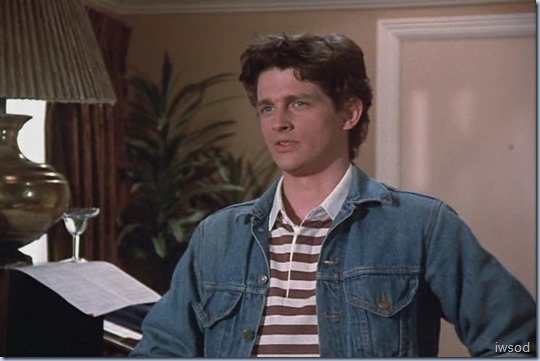 King Eddie: I used to have dark curly hair when I was your age. 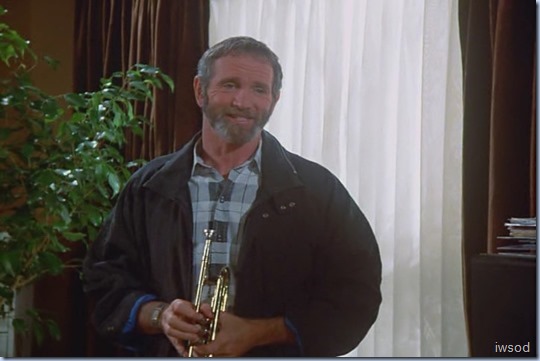 Terry Wall: Are you really a king?
King Eddie: It’s what it says on my licence. Listen, Terry, this is not the way I wanted this to go down.

Terry Wall: Of course not, we were going to get together, toss a football around, maybe catch a movie then get some pizza, right? Spend an hour catching up on a lifetime?

King Eddie: All right, all right. You take your best shot son. Yes, I’ve earned it. 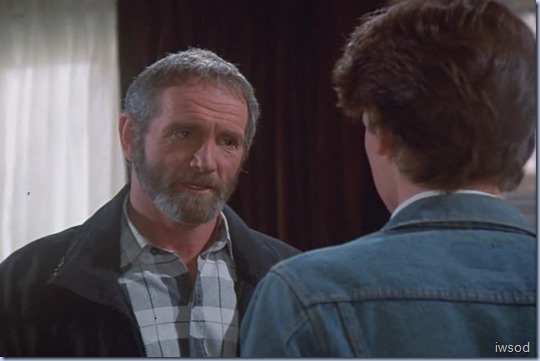 [Awh great to see Eddie putting his son’s needs first.. and not getting defensive]
Terry: Forget it.
Terry goes to leave, but Eddie grabs him and stops him.
King Eddie: No, no, no, no. You stay. You stay. Look, don’t go away. Listen to me, we’ve got to start somewhere, huh? 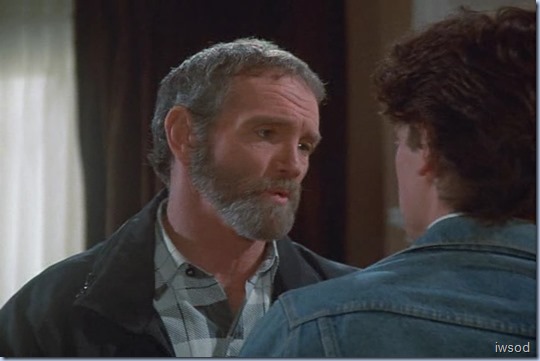 King Eddie: Okay.
Terry: Start by telling me, how come I never heard about you, never saw you, never knew I had a father who was a King.

King Eddie: Yes, well, your mother thought it would be easier for you if you didn’t have to worry about some father who was 8000 miles away. Well, she must have been right – you look like quite a together kid…
[Sweet also to see Eddie not painting Terry’s mum negatively]

Terry: Yeah, real weird.
[LOL child like Eddie sounds just like Terry.. and.. it seems to break the ice a little!]

Terry: I’m okay, really. I tried to look up Cap D’Far in the encyclopaedia – it’s not there. 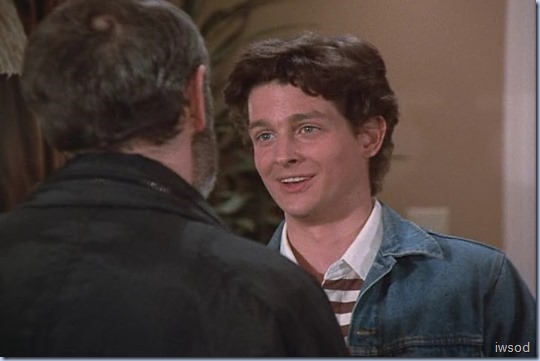 [lol he stopped by the library before coming to the embassy?]
King Eddie: Yes, ha. I keep forgetting to send back that questionnaire to the encyclopaedia people…
[rofl! like a King fills that out?! haaa]

…But it’s no biggie, huh? Do you like music?
Terry: Yeah, sometimes.
King Eddie: Good, good.
(Kiwismh adds: Eddie says something else here, but I can’t make it out – sounds like “mirror”?)
Terry: Are you really dying?
[Ummmm how does Terry know this?! This did not come up at Lee’s apartment! Or have I missed something? anyone? Anyone checked out if the script gives us any clues here?! Me thinks this may be a plot hole. ]
King Eddie: Oh, there are worse things.
At that moment.. in walks Crowley and beige baddie.. 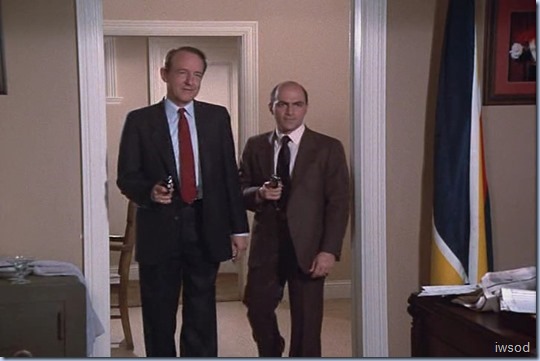 Speaking of worse things…
[I wonder which pocket rocket is shorter.. Billy or Beige baddie..]
Crowley: A noble attitude, your Majesty.
The scene ends here.
[Ugh. Crowley is Barf-ly! whahahahaa.. see comments of post 7 if you don’t know what this refers to and are interested

I must say, by now I am liking Eddie much more. I especially like how he seems to be genuinely putting his son and his mother first.. He seems to be approaching this meeting with his son with unexpected sensitivity. The guy is not a total doofus after all

Phew.. Will anyone have anything to comment about given Lee and Amanda aren’t in this episode? we shall see! ha haaa! You guys are so hard to predict! and I love that

I remember during the northern summer was very quiet last year on JWWM.. That’s likely the case this year too! I hope you are all enjoying your summer break if you are in the north– and don’t worry, the walk will continue at a slow pace… Come on back when you can squeeze us in – you are always very welcome!! If you’re in the south – hope you are keeping warm!