Sorry for the delay, that kiss in the previous post had me dizzy and nonsensical. I needed recovery time before I could continue!! Finally, I feel ready and able. Thank you for your understanding

Hope you are recovered enough to join me for this walk through the final section of this episode! Here goes..

Back to Magda’s dress shop.
{Francine dressed as Magda, or Magda (LOL) listens to secretly to a message from Billy.  Aie my head hurts. Behind her, the Habib brothers are waiting.]

Billy [voice-over]: We’re in place. As soon as Birol smells the fish, you do the rest. He’s got to think a big dredge net is about to drop on his head.
[You know, I’ve only really focused on the swoony elements of this episode.. and here I am now needing to actually focus on plot lol. Sooooo have I understood correctly? They want Birol to sense the set up and flee yes? ]
Francine as Magda: There’s Birol’s truck. He’ll have Amanda. Be ready to show the money. [Jerry Maguire stole that line?! What do the Habib brothers want or care about with Amanda? I thought they were after airplane parts and were getting  F-15 fuel pods and a Xerox machine thrown in. Do they think Amanda is what fuel pods are called maybe?! rofl! ]

{Francine and the Habibs watch Birol gets out of the truck. Amanda is sitting in the truck with her eyes closed, drugged.} 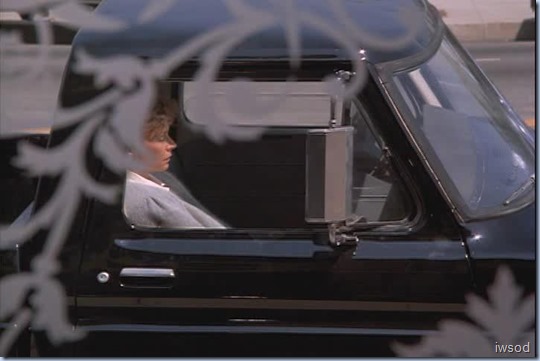 [Habib Brothers thinkin: What’s an Amanda King?!]
Birol approaches the front window..
Birol: Salaam alaikum.
First Habib Brother: Alaikum salaam.
{A blue sedan swerves sharply across the street in the direction of the shop. The second Habib brother opens up a briefcase to show Birol the money and says something in Arabic. (NOTE: One of the words is “massari,” translated money.) The sedan abruptly parks the wrong way at the curb. The doors open.}

Birol: Where’s the rest? The price was five million!
{Magda and two other Libyans get out of the car.}
Magda: Addi, it’s a trick! Run!

{Birol turns to look at her . Francine turns to run, but deliberately trips on a rug on the floor. Her head falls back sharply so Birol can see that a wig falls off.

The Habib brothers’ attention remains on Birol as they pull out their guns.} 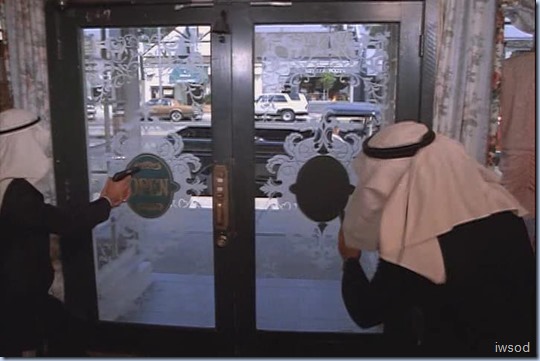 [If I were Francine I’d be worried about those guns… these Libyans don’t muck around – okay what’s an Amanda King and what did you just set us up for?! And.. where’s my Xerox Machine?!]
{Birol and Magda run to his truck and get in and pull away. Amanda is seated between them, her head tipped drowsily towards Magda.}
Magda: Those weren’t the Habib brothers!
Birol: But that was you…except for the hair. Who set me up?!

Magda: The Agency! They found out about the trade. Addi, I don’t know how!

{“Amanda” peels off her mask to reveal she is actually Mara.}
…I see you were clever enough not to risk your ace.

[we hear Mara moaning, Poor Mara! I hope she gets a bonus or something when this is all done. Oh and how is it Birol had drugs for Mara but none for Amanda? oh whatever, different drugs maybe..]
Birol: It’s off.
Magda: But the-the Libyans will still pay!

Birol: Forget about the Libyans’ money! You and I can make a new Karbala. We’ll even have martyrs.
[what a hero volunteering others to be martyrs… yeah I’m guessing he isn’t volunteering!]

[Street Outside of Madga’s Shop.]
Billy: Well, Birol has bought it all the way. And I’m locked in to Magda’s signal.

[Billy Habib is flippin hilarious!
Oh and.. House of Stewarts? I’m sure they added that Little touch to help Mel’s mother get over the pilot episode’s Stuart/Stewart spelling boo boo!
oh and enough with the cigars! This is so over the top it’s gotta be making fun no?!
Okay.. before we move on.. I gotta get my head around all this. or at least try…
Francine and Habib brothers show up for cover deal with Birol, Birol senses set up, Magda confirms set up – which is all of it, a set up to get Magda and Birol back to where Amanda and Lee are. Still, no idea why Habibs would give a toss what is an Amanda King. lol. I guess that was for the sake of the audience to be fooled in the moment.. not really considering the characters ha!
Okay, moving on for the big action finale!]

Back at Birol’s and he enters Lee and Amanda’s room, tossing Mara like a sack of potatoes. Ouch. He has his gun drawn..

But nothing gets in the way of Lee/Amanda cuddles. Aren’t they lookin adorable?!

Lee gives Magda the signal… she nods back.. 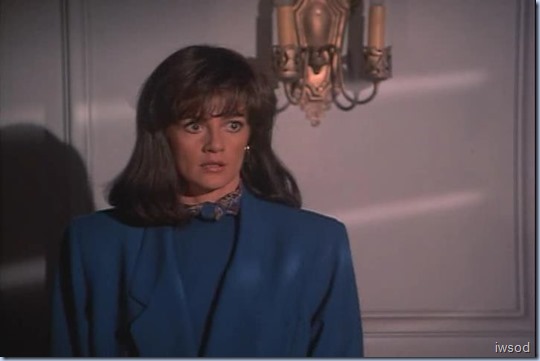 Birol: I know enough to know you’ve done a surprisingly complete job. You’ll both be remembered as heroes… [Ohhh so Lee and Amanda were the martyrs he had in mind. Sorry I’m a bit slow! ] 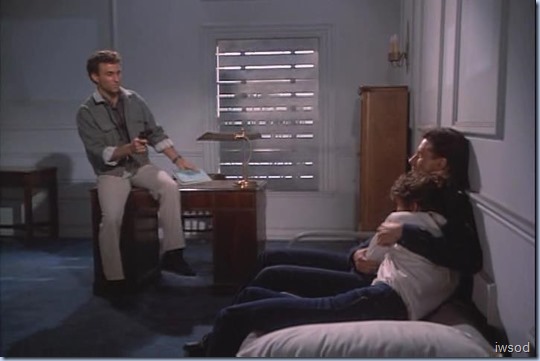 {Magda takes a Zap gas canister out of her jacket and activates it. Birol aims his gun at Lee and Amanda}:

…and martyrs of the people.
[Uh oh. Birol aims his gun at Lee and Amanda!!!]

{Magda throws the canister toward them.}
Birol turns toward Magda and the widening fog of gas and Lee seizes the opportunity of jumping Birol from behind..

Cue the action sequence. We have…
punches..(Lee cops one at least, Hey our hero has to be seen to suffer a little no?!) 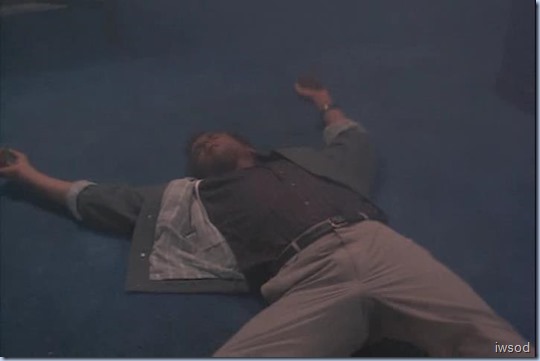 (Yep, this is how I like to cover smk action scenes when there is nothing funny in the happening!)

Billy, Yusef and his cigar come in to take the dirtbag downtown.

[Yusef wins the prize for biggest gun. I think it’s so it doesn’t look like he’s carrying one of those gun shaped lighters haaaa]
Billy: You got it under control?

Magda shows some actual care for her sister here. Hoorah. she helps her out (and hopefully to some medical care then a holiday!)

This all very conveniently leaves Lee and Amanda to their cuddles..
Lee: Amanda? 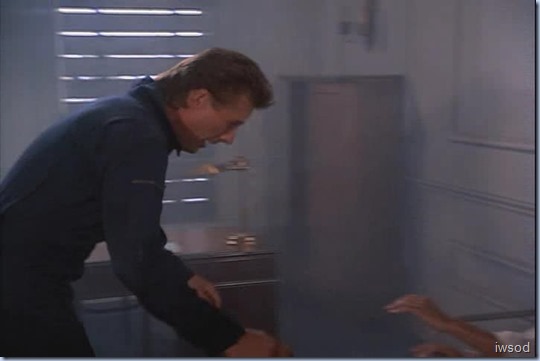 …It’s-It’s Zap gas and right now you won’t be able to move, but…

…it only lasts a few minutes.

Amanda: Better last longer than that. 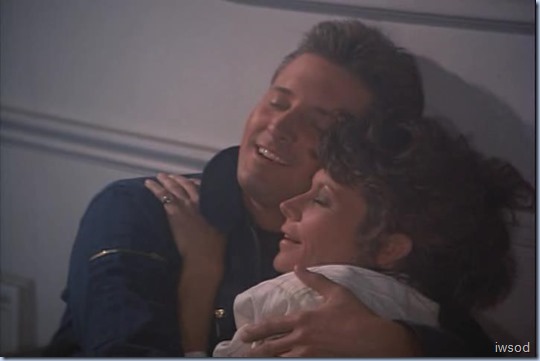 Drug induced but.. sweet haaa.. [get me some of that!]
While the actions sequence is for me, super lame.. to see this little ending makes it worthwhile!

Moving on and it’s tag time.. Is this the first time we have a tag with zero dialogue? I think it might be.. and you can be the judge of if it’s needed! Share your thoughts – all views welcome!!

Amanda enters the Q bureau alone.. puts some milk in the fridge..

and heads over to her desk – she stops suddenly.. there’s something on her desk. A box?! A small box!!!! 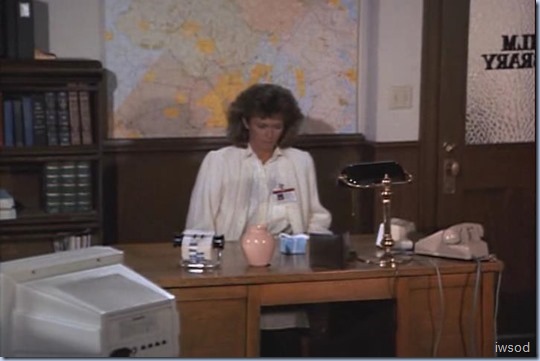 She opens it.. cue the romantic music. There’s another ring box inside.. 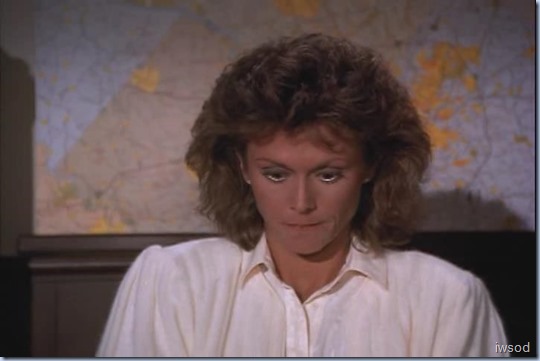 What could it be?!

Yep!!! Amanda and her shoulder pads react and it’s adorable.

But.. where’s Lee?! He still stuck on that bed from the zap gas?!

Ahhhh here he is.. He quietly enters, enjoying the specialness of this moment..here the love chimes?!

He slowly, wordlessly, he makes his way around to Amanda’s side. 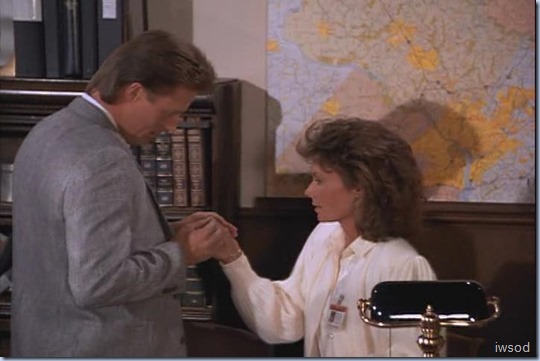 Lee takes a seat on the edge of Amanda’s desk, and takes the ring from her hand.

He puts it on her finger.. 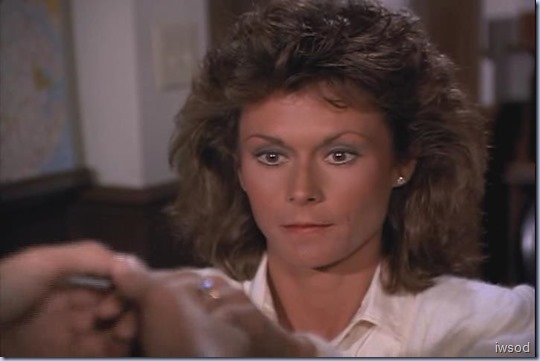 it’s time for Amanda to swoon!

She takes in the ring on her finger, as Lee takes her hand in both of his..

okay, more smiles.. then a kiss!

We end the ep with a close up on the ring.

He likes it and he put a ring on it!
Time for us to join in and swoon too!!!

Certainly a different vibe to this tag than others, but I do love that they’ve gone unapologetically romantic – go big or go home!

For me I love that there is no dialogue, because this is just a continuation of the proposal scene – the words have been said, and this here is the official sealing of the deal.
Any further dialogue would have been well… redundant. I don’t think I could get any better than what was said before but then I loved it – I know not everyone did… so really curious to hear all the different views of this proposal!

Can’t wait to hear from you guys!!!

So that’s it for Night crawler!!! we did it!!! thanks for your patience, and thanks again to Jaimie for the transcription.

Next up? is Billy’s Lost Weekend. Transcribed by wonderful Kiwismh- hope you are well Kiwismh if you get a chance:  stop by and say hi!!  I’ll try to cover episodes in less detail so we can keep the pace moving forward consistently.. (don’t worry there is no risk here of rushing!).