We continue!
We see Gunning pull into a car park.
[oh rofl he has a red convertible. Of course he does. Is that a red Porsche? ] 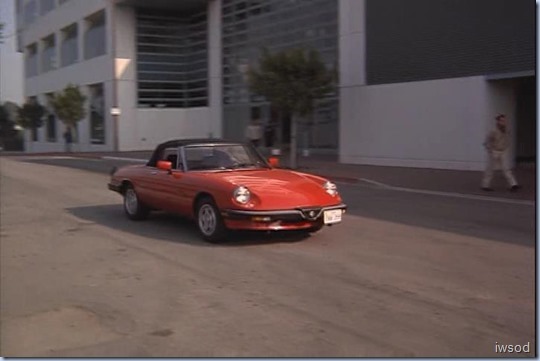 (He’s followed by Lee in a boring sedan. Lee parks outside the car park, not following Gunning inside.
We see Charlie rock up outside too, but he’s not really worrying about being seen or heard.. he squeals his tyres as he tried to park and head inside.
Lee sneaks between the cars.)
[lol that is a really nice view. Haaaaa] 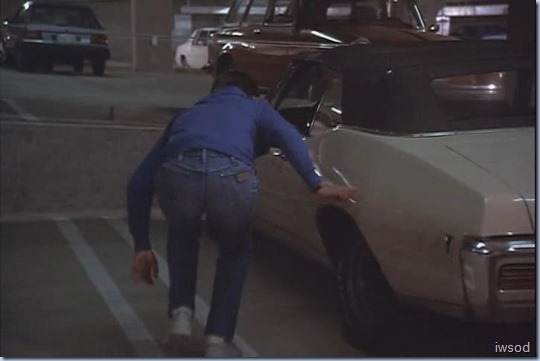 (We see Dr Eldridge approach Gunning in the car park.)
Gunning:  Eldridge, what’s going on?
Eldridge:  I had to talk to you.
(We see – uh oh- Fouts is there sneaking between cars too.) 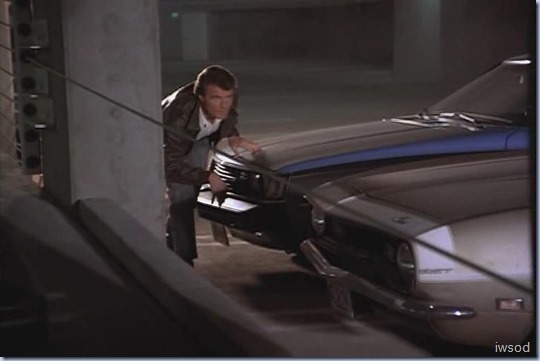 Gunning:  What’s going on?  You never call me at the office.
[Oh rofl. and that’s the one time Amanda King answers the phone?!]
Eldridge:  This will be our last meeting.
(We see Lee pull something out of his pocket in the foreground. I can’t see what it is but it’s a lovely pocket.ahem.) 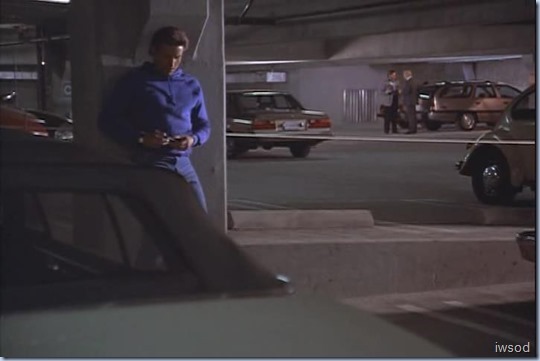 Gunning:  Why?  We’re just about ready to pry the lid off this thing. 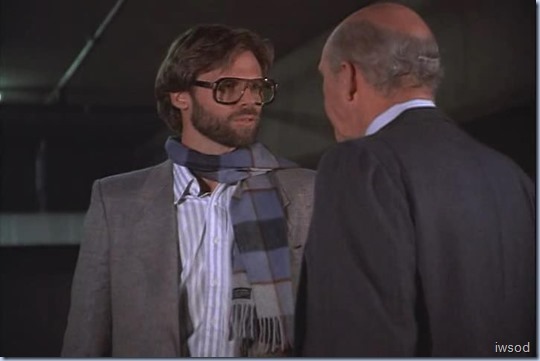 [lol what’s with the scarf? he looks like Where’s Wally/Waldo!]
Eldridge:  What I’m about to give you today will blow it all the way off. 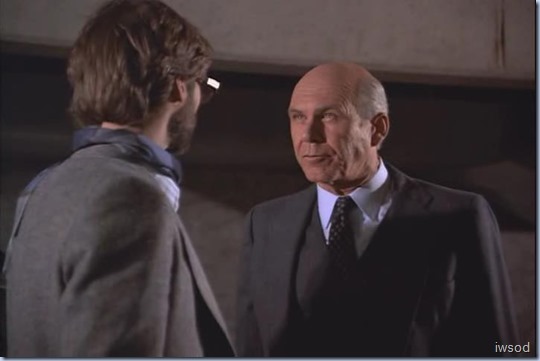 (We see Charlie slam his door and then head into the car park.)
[Yep, Lee needs to start selling sandwiches as his day job!]
(But first, Lee tries his hand at some photography work.)
[lol at that teeny tiny camera taking images from so far away?!] 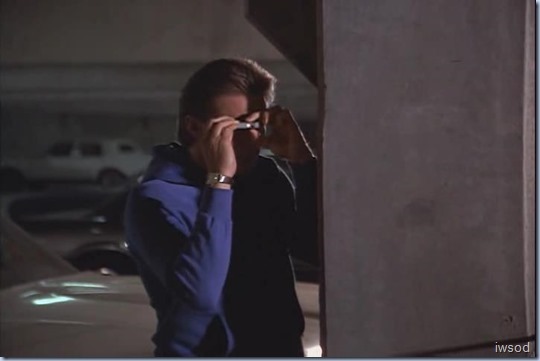 Sooooo what lies is Nesbitt feeding to sucker Gunning through Dr Eldridge?
Eldridge:  It’s an official security council report on the state of our Tritanium reserves.
Gunning:  Pretty low?
Eldridge:  Totally empty.
(As they discuss this super secret stuff in this echo chamber, lol, along comes Charlie to take photos again. He has a real camera not like Lee’s haaa) 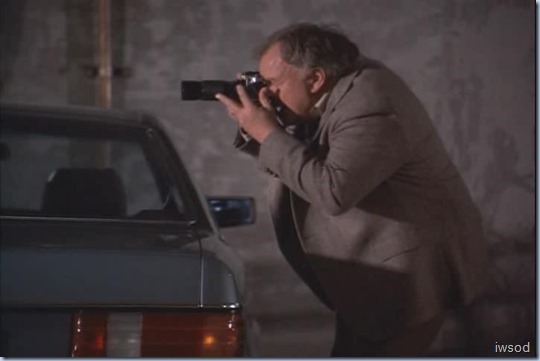 Gunning:  So you’re saying someone is stealing the Tritanium? 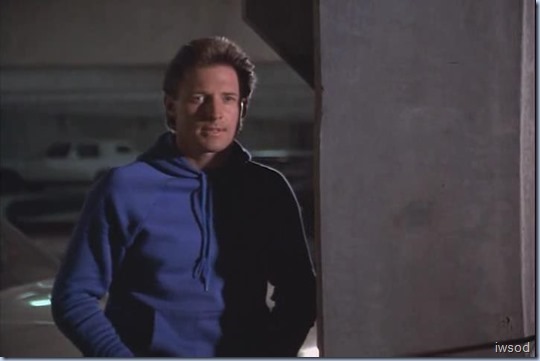 (Lee spots Charlie. Yeah Lee. you got followed!!)
Eldridge:  That’s what I hear, but I’m checking it out.
Gunning:  Is the President aware of this?
Eldridge:  I don’t see how he could help but know.
(Eldridge hands Gunning an envelope and leaves. Charlie takes some more photos.   Fouts continues to watch on from his hiding place.
Eldridge and Gunning get in their cars and start leaving.
LOL at Gunning speeding out of the car park with squealing tyres. Offf course he is.
Charlie, leans on the car in front of him and sets off the car alarm. rofl. this guy just can’t successfully do stealth.
[–except when following Lee rofl.]
Fouts pulls out his gun and aims it at Charlie. Lee notices and calls out to save Charlie.)
Lee:  Charlie!  Hit the deck!
(Fouts shoots Charlie in the leg, then Lee shoots Fouts and he goes flying.)
Lee:  Charlie, are you alright?
Charlie:  Yeah.  Yeah.  What about him?
(Lee checks Fouts’ pulse. ) 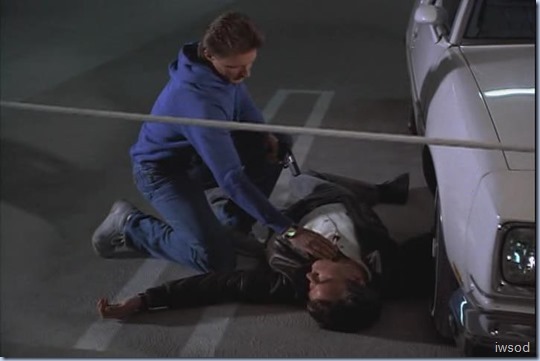 [Looks like he’s dead? Lee doesn’t aim for the leg!]

On to Lee and Billy having a catch up in IFF..
Billy:  When it rains, it pours.  One minute, we’ve got zip.  The next minute, my desk is overflowing.  How’s Benton?
Lee:  Leg wound.  Lost a lot of blood, but he’s stable.  I sent Amanda over to talk to him. 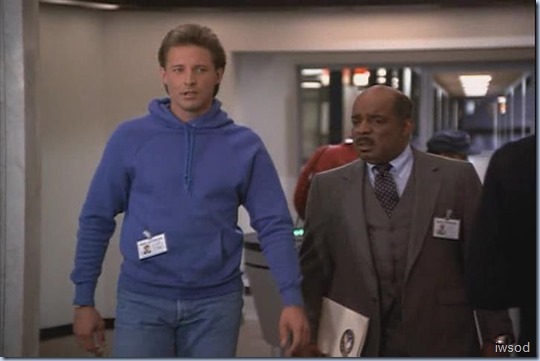 [Lee looks so good in that colour. Focus iwsod. Sorry!]
Billy:  Is he going to play along?  Keep the shooting quiet?
Lee:  As long as he can.  He’s got a few days sick leave.
Billy:  What about the FBI?
Lee:  Bought us about 24-hours.  They misfiled the death certificate on the gunman.
Billy:  That’s good.  We finally got an ID.  Derek Fouts.
Lee:  Derek Fouts?  The shopkeeper?  Ha…
[Ohhhh that is hilarious!!!!! His nickname is the shopkeeper?! whahahaaha..  Lee knows him? I mean such a shame Lee didn’t notice him sitting 2 meters away from him back at Nedlindger’s.]
…Part-time mercenary, full-time merchant of everything the wrong people shouldn’t have. 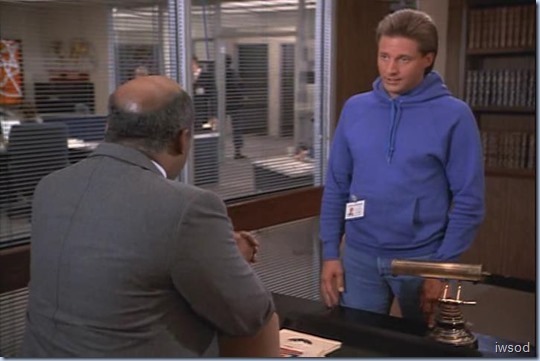 Billy:  You got that right.  For over six months, we have tied him into everything from stolen Kalashnikov rifles to missing Plutonium. 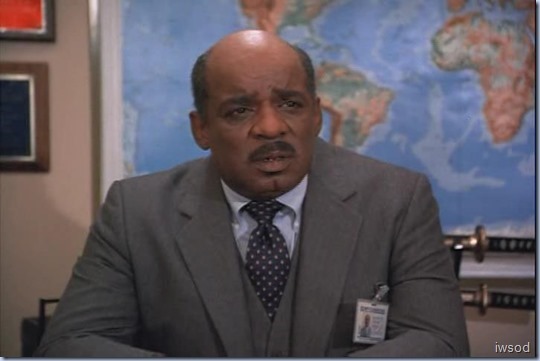 [wow. what a shame Lee didn’t notice him at Nedlindger’s!]
Lee:  Why is he in a parking garage, shooting at Charlie Benton?
(Francine joins them in Billy’s office)
Francine:  We’ve ID’ed Gunning’s source from his tag number.  Dr. Phillip Eldridge, science advisor to the White House. 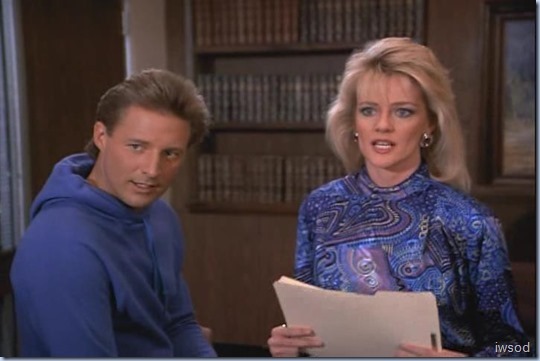 Lee:  And architect of our strategic metals program, I think.
Billy:  Bingo.  Bring him in, Francine.
Francine:  Eldridge’s housekeeper found him dead an hour ago.
[Ooooof course she did. Gee who did the deed if it wasn’t Fouts?]
Lee:  What?
Francine:  An overdose of Digitalis, probably right after his meeting with Gunning.  We’re checking his prescription. 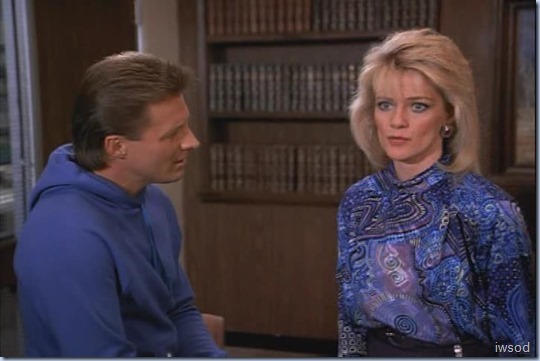 [Okay, I guess Fouts could have switched his medication the night before or something. I’ll go with that!
Hey so what’s the verdict on Francine’s blouse?  It seems to be blue blue blue in this scene]
Billy:  What the hell have we got here?  News conglomerates.  Dead mercenaries.
[Just another week at IFF no?!]
Lee:  Why is the President’s own science advisor lying to the press?  He’s got to be Gunning’s source.  He’d know better than anyone if our Tritanium is secure. 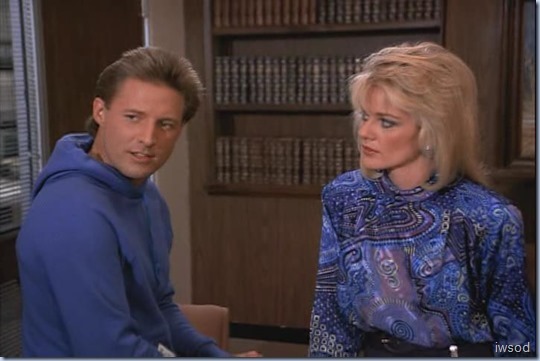 [Huh?! I mean, is it just me or is this a head scratch moment? The moment we saw them meeting in the garage secretly, and him handing over an envelope it was obvious he was Gunning’s source wasn’t it?! ahhh so professional of BB having to deliver that line with a straight face.] 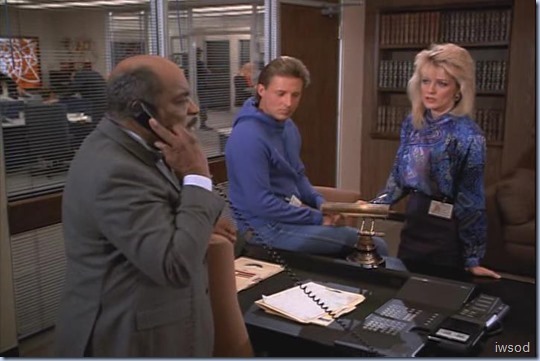 Billy:  Melrose, here.  Yes, Dr. Smith.  Yes sir, I’ll be right up.  (He hangs up.  Then to Lee and Francine):  The latest Telegram story just broke the camel’s back.  The President is sending in an inspection team to the Tritanium site.  0600 hours tomorrow.  We are in charge of security. I want you to conduct the tour.
[Of course it will be Lee’s responsibility. lol.]
Lee:  There is your why, Billy.  If Nesbitt is trying to find our Tritanium stash, he just cooked up a good way to do it.
[Whoa okay so how did Lee get from Gunning to Eldridge to Nesbitt?! I mean yeah, he’s right lol but.. that came from nowhere! or.. did I miss something?! I guess there was the talk about Nesbitt back at Neds and Nesbitt working with Dursak, but how does that directly link Nesbitt to any of this mess?
Oh I know, it’s all those fou fou recipes that they’ve been publishing- sooooo suspicious!!]
Billy:  We can’t prove that, Scarecrow.  They’re going out there on a blind bus.  They won’t even know where they are.
[I guess Billy sees it as a bit of a leap too. Nesbitt is a baddie, so therefore he must be involved. lol]
Lee:  Alright, then I say we pick up Gunning and Nesbitt and start squeezing them right away.
[rofl. Lee is hilarious. no proof? Okay, I’ll just.. squeeze!!! Wasn’t there a line once that was something about squeezing toothpaste from a tube or something?!]
Billy:  Then they’ll start screaming that we’re violating their constitutional rights.  No, the only way to handle this is to put them under surveillance until you bring me cause, and I mean a lot of it.  As soon as the inspection is complete, we’re taking the Tritanium to a back-up site. 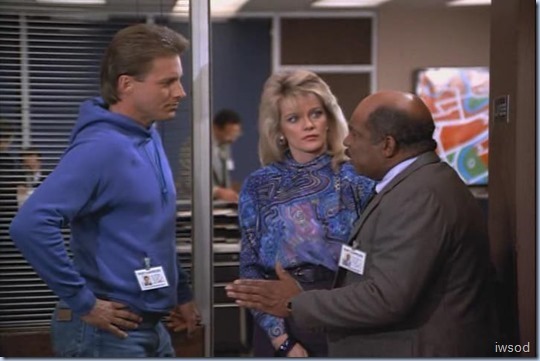 Lee:  Alright.
[You know, if Lee didn’t have Billy, Lee would have lost his job ages ago. Constitutional rights? ohhh yeaahhhh..
Anyway, I think I caught about half of that, I was pretty distracted by a certain pair of blue jeans.. I’m so ashamed. err not. I’m not.]

Moving on and it’s time to check in with the baddies. Ohhhh back to the famous learjet! lol

(Nesbitt is wondering why Fouts hasn’t checked in. Dursak isn’t worried though as Fouts is ‘a total professional’.
Looks like Dursak swapped Gunning’s glasses out for a pair that have a bug in it. lol. They’re going to follow Gunning to the tritanium stash.) 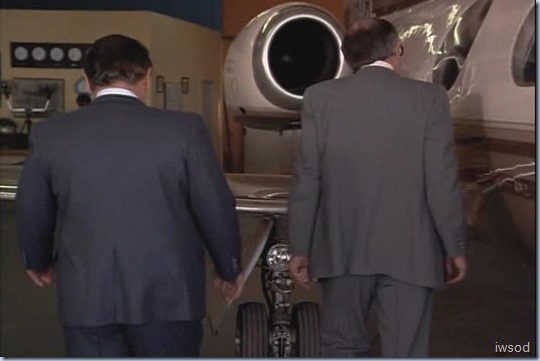 [Riveting viewing. It’s not hard to see why this scene is just, flippin dull!]

(We see Dursak worry some more about not understanding Nesbitt’s motives, and then.. then.. we get the baddie manifesto!!!! rofl. Listen up Dursak!)
Nesbitt:  Why would I sabotage my own country, you mean?… We’re partners and you don’t know how to trust me…. I wouldn’t even need a partner, if you didn’t have the missile.  Don’t you understand? 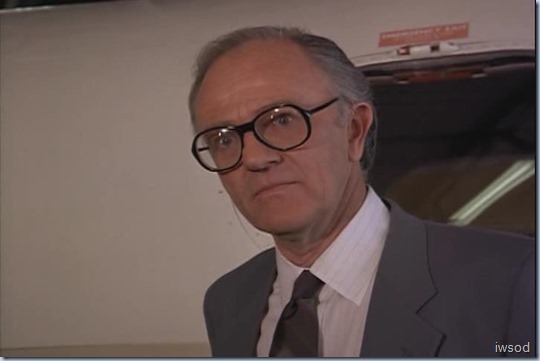 …I’m not doing this for you.  I’m doing this for myself.  And for my country….  All the SDI technology will do is throw off the balance of terra.  Take away the Tritanium and we’re back to the same old ugly standoff.

Dursak:  Your country could have supremacy and you’re letting that go?
Nesbitt:  Supremacy for what?  A first strike.  I don’t care what they call me.
Dursak:  Some people will call you a maniac. [whooo that cuts man! rofl]
Maniac:  A world balanced on the point of a sphere is better than no world at all.  Besides, I’m a newspaper man.  Makes good copy. 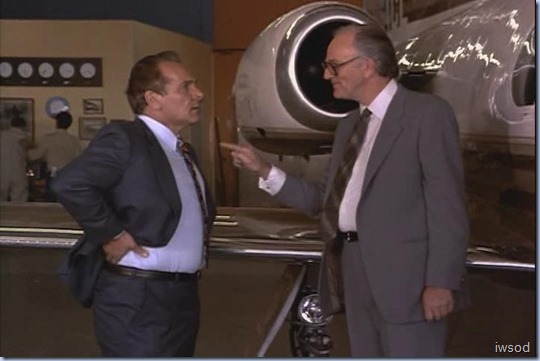 (Nesbitt the maniac walks off, and Dursak pops another antacid.)
[Soooo what do you make of this? If I’ve understood correctly, I think the maniac is just wanting wars to continue because it’s good for business?
I find the maniac so dull, and Dursak isn’t much better. The only cool thing about this scene is the learjet!]

(Back to the telegram, and Lee is sneaking around.. he sneaks into a locked door…) 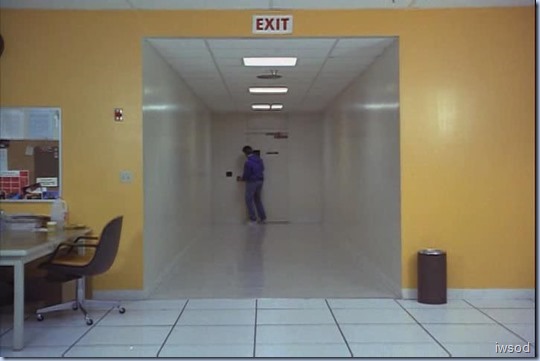 [That’s where Nesbitt’s office is? The sign above the corridor said exit! man this guy is a maniac, he’d have people try to flee a fire only to hit his locked office door! whahahaahaha.. 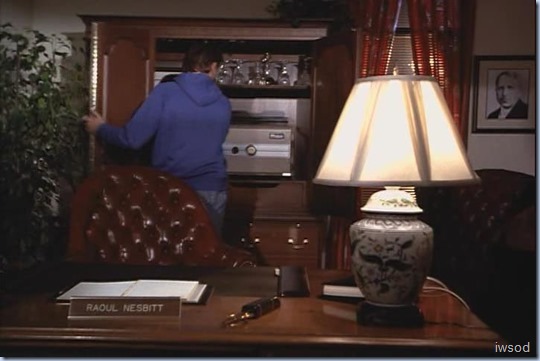 LOL. Anyone able to identify who the picture on the wall is of? Do tell!
{Once inside, Lee opens a cabinet, breaks into the safe that’s inside and removes some files.} 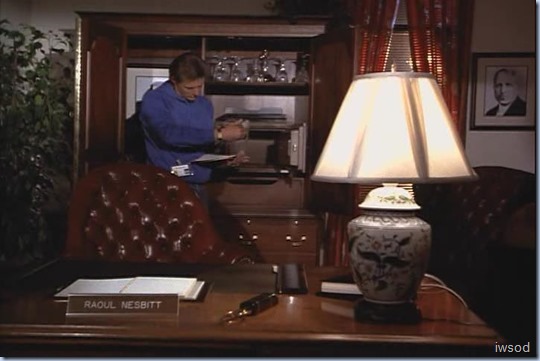 (We see one of the files is a listing of Eldridge’s meetings with Gunning. 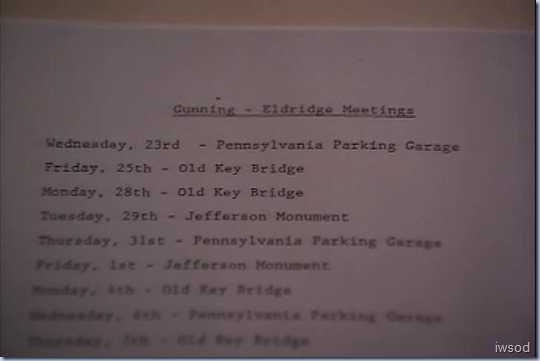 he sits down and starts flipping through the documents.
[Hey who is that photo of in the cabinet?] 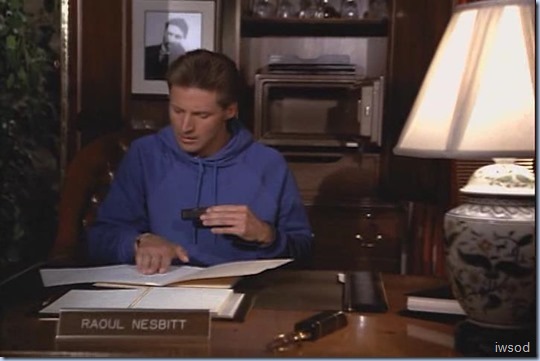 Lee starts taking photos of the documents with his trusty teeny tiny camera.) 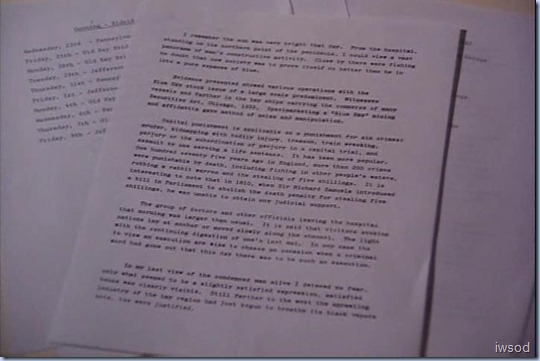 [I can’t quite make out what the document says! Only a few words here and there..
I think that last paragraph starts with “In my last view of the condemned man alive I detected no fear, only what seemed to be a slightly satisfied expression…”
Is this from something well known?
I don’t usually have time to do this stuff anymore, but for once, I’ve gone looking.. and I found this is similar to a document we saw a close up of in Double Agent.
Here: 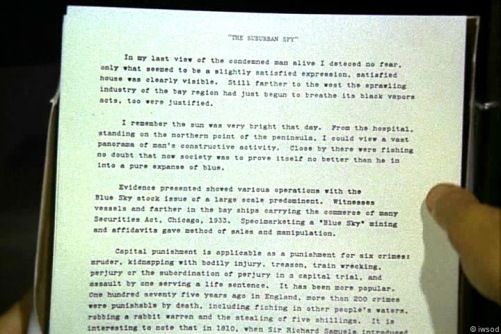 It’s not exactly the same document, but it seems to be the same content formatted in a different order. hilarious.
Who would have thought that Nesbitt would have in his safe Harriman’s ‘The Suburban Spy’ manuscript. Man Nesbitt has connections!
So we’ll pause here – anyone got anything they’d like to share?
Ahhh I miss going off on tangents, but, life just doesn’t usually give me the time  – others can feel free to go for it and share their finds with us all if you like!!
[Like Amandarambler’s the Hotel Roosevelt sign  sighting. What a great find!!]