9/9 Season Two, Episode 2: The Times They are a Changin’- Scarecrow and Mrs King

Uh oh… Lee gets nabbed by the music hater..

Actually she’s not so bad.. it was very kind of her to just kind of wave her gun near the back of Lee’s head like 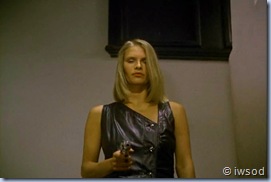 that so he could knock himself out falling down the stairs

Maybe the tux won her over

AHA!!!! Finally I figured out where I had seen Von snob’s house before!!! It’s the fake blind baddie’s house in Brunettes are in!!!!! ROFL!!! In America!!!

Anyway, next thing we see Lee and Amanda maintaining their tradition of spend the night being held captive together !

Lee is out cold.. I love how their heads are resting together.. awh.. like they are offering comfort to each other..he comes to.. ugh.. I hate that flippin flute! they do a good job of making it annoying!!

Amanda: What am I going to tell Mother? She must be worried sick. I didn’t come home all last night.
Lee: Yeah, I know that.
Amanda: I didn’t even call.

Lee: Tell her you were tied up.

Von Snob enters the room: I’m so sorry, my dear, for the inconvenient

way you had to spend the night.
Amanda: Then maybe you’d consider letting us go.??

Love this line!!! Love the look Lee gives von snob as Amanda says this.. challenging Von snob- like he is saying- you are full of empty words and Amanda called you on it-Pal!!!

escape?! Dummy.. the baddies head off to nab Haddy the daddy.. Love Inga asking Von Snob if she can kill them.. she’s a baddie with lots of personality!

The moment they are alone, we can see Amanda’s given up hope.. but.. Lee’s brain is in gear, looking for a way out.. awh! good for him!! 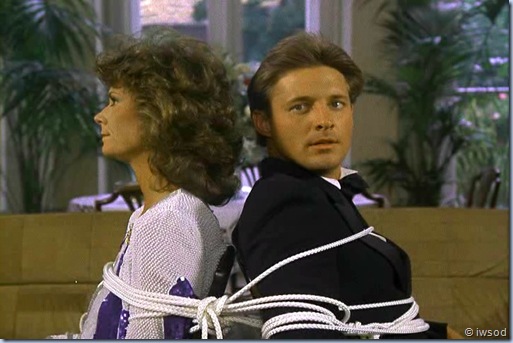 (The whole let’s knock over the vase scene is funny- but probably not suppose to be!!).. Amanda’s facial expressions totally don’t match the noises

that we hear from her! hehehee.. I bet Lee took great pleasure in breaking Baron Van snob’s vase! 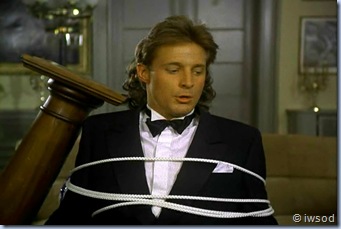 Love how Amanda’s hair is suddenly very wiry when it comes time to fall to the ground tied to the chair! tee hee.. ahhh I love stunt Amanda..
Amanda says “I’m glad I wore the pants instead of the gown. “ – ain’t that the truth..(although she could have gotten away with a gown.. it’s stunt Amanda that does all the tough work

The script had an extra moment here where Amanda uses Lee’s american express card [product placement alert!] to open the locked door.. glad they didn’t go with it- overkill! Maybe the endorsement agreement fell through 😉

Anyway, Lee and Amanda are free and the chase is on! this is where my atttention begins to lag.. the scarecrow and mrs king theme kicks in rather loudly, we see lots of stunts and Lee kicking butt.. Amanda bumbling somehow but things working out in the end.. goodo..

Hey! Amanda is super clever, she can get kidnapped, tied up all night- and hang on to her handbag!! I am in awe of her talent..

How did Lee and Amanda arrive in Emmerams Mueller before the baddies? don’t tell me.. Lee knows a short cut

Did Lee just say Wait here in german to Amanda? HA!!  (yeah Lee you may as well tell her in german, for all the good it does to tell her that! haaaaa haaaa.. )

remember that moment in nightcrawler?? !!!) to get Haddy the daddy, but the two baddies show up..

lots of shooting.. yawn yawn.. hey it looks like blood thirsty Inga is a lousy shot!!

you know.. because my interest fades in these big action sequences I am sure I miss out on lots of goodies.. I just stumbled across one when looking to see if I could get a shot of Inga getting squashed (lol!)- I couldn’t (

Inga’s face as she realises the skip is coming right for her.. and then we see Inga’s point of view: the skip coming straight to camera- and- rofl! you can see someone’s sneakers underneath it running and pushing the skip towards the camera when it is suppose to have run away from Amanda!! haaa!! 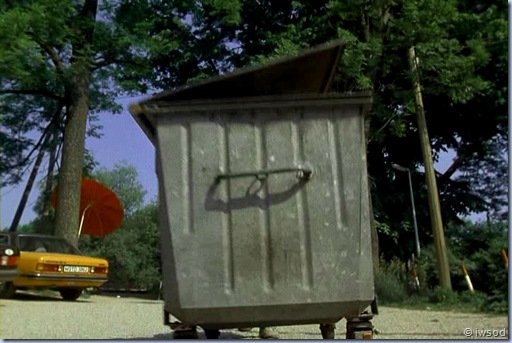 Ah looky.. Billy and Francine have showed up.. Flutey boy takes off on a motorbike and super Lee has to run after him Oh goody! bike chase.. and so continues Lee’s contractually obliged 10 minutes of action and compulsory single handed nabbing of the bad guy.. Lee always chooses the motorbike which will be the fastest!!! How does he do it.. ha haaaaa

Gorgeous scenery! Isn’t it great that SMK didn’t just lock itself away in a tv studio in London to film these european episodes!! They make the most of it, and it is just glorious!!

LOL! Lee has to pull the knocked out bad guy up off the ground so that he can deliver his trademark 1, 2 punch!!!!! and then.. and only then, is the baddie allowed to pass out!!! I’ll tell you when you can pass out Pal!!!

Hey! this week, the action doesn’t stop here!! we’ve still got an assassination to stop!

Lee heads back to all the gang and Haddy. They put their heads together to work out who’s the target..

Haddy is certain the

target is him though..  Amanda realises there is only about 5 minutes left of this episode so she had better hurry up and solve the puzzle here.. so Lee and Amanda have time to save the day, and have their little tag together 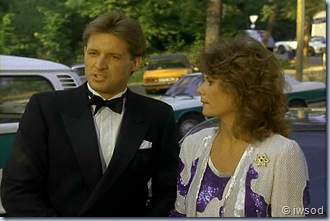 Lee: His Royal neatness is the back up assassin?  – whooo Lee! that’s harsh!!! 😉 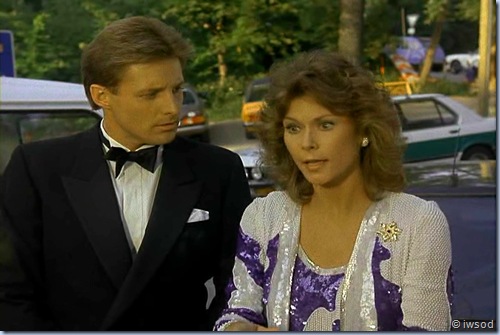 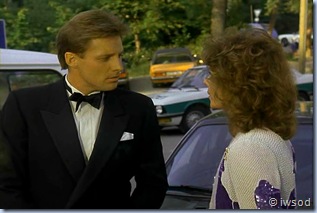 Amanda: It’s not the kind of night that falls when it gets dark! It’s the kind of knight that wears armour!
Lee tries to leave without Amanda.. no way 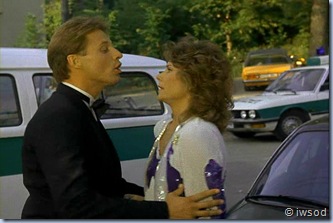 Amanda tries to come along and he pushes her back yelling: NOOO!!!!

Lee is determined to keep Amanda out of danger, but.. Amanda responds quietly, calmly, firmly, intensely( go Amanda! she even manages to still smile slightly here-awesome acting KJ!!) : LEE!!! MOTHER AND THE BOYS ARE THERE!!!

Billy and Francine seem to notice the sparks 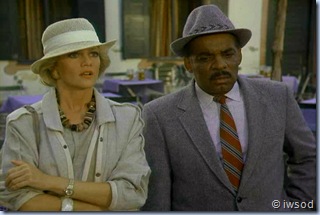 between them here too

..Lee sees- he can’t stop her from being there for her family!!!!

( good decision!) soooooo on the bike and let’s go!!!! so glad I can finally get half decent photos of this moment.. before the official dvds it was just too blurry to bother! whoo hoo!Gee aren’t you glad you wore your pyjama pants now Amanda?

Anyway, on to the glockenspiel.. Lee and Amanda will meet you there stunt riders!! 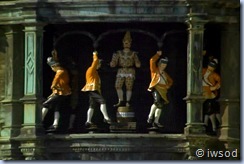 AHA! So there is the weird puppet dance they were talking about at the party! they should have showed that footage at 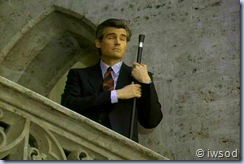 [I’m guessing this location has zero to do with the actual marienplatz??!! though very pretty! ETA:**Thanks Claudia and Redgold- I guessed wrong here 😉  I stand corrected here: this really is the marienplatz? I am super impressed they managed it!! 🙂 ] So, Lee and Amanda arrive just in time.(get it?!)-The knight is about to fall! eek!!!  Lee 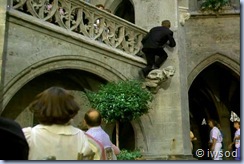 the human spider climbs up and stops His royal

neatness.. and.. gives him a contractual 1,2 punch! EEEEKKK!!!!! Oh dear.. when Lee stops and picks lint off the Baron’s suit and says “just a bit of lint”

and mocks the baron- I cringe!!!! I know others will feel differently, but for me, I think it makes Lee look  petty! I think it was suppose to be clever.. but I thought it made Lee look small- and that is not what his character is like in my view! [I never understood the concept that the Baron was willing to shoot the guy in front of everyone.. I thought his cover, money and reputation were key to how effective he’d been.. so what he gives that all up just to be the one to shoot this guy?]

LOL, It is kind of ironic that in the next moment Lee tracks down Amanda, and she brushes off his 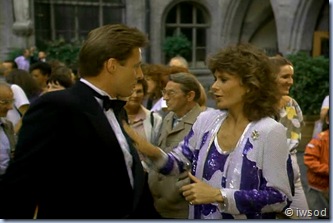 jacket absently while she tells him where her family is!!! tee hee! [did I just hear Amanda whisper ‘lint!’ ?? ] whahahaa! Just kidding!!

Although I do have a sudden craving for Lindt chocolate..

How did Dottie and the kids not see Lee take out the baron? How did they not see Amanda in her crazy distinctive outfit on the back of that dirt bike zoom into the square? her arms around a conspicuously hunky guy in a tuxedo?? I mean.. who misses that??!! 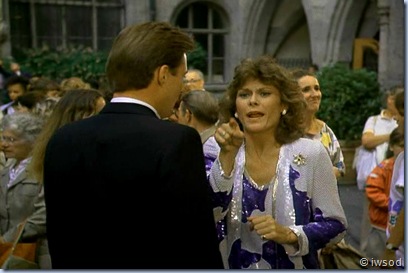 LOL!! A surprise goodbye from Amanda here!!Now who doesn’t love how Amanda

on him??!! It’s ironic because Dotty and the boys sneak away while he isn’t looking also!

His reaction is great! 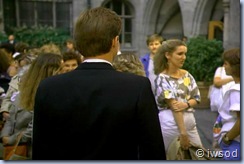 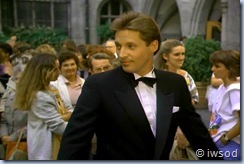 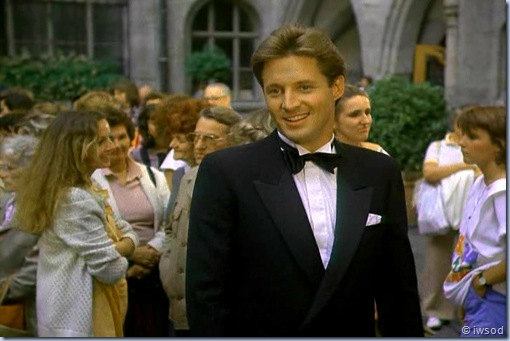 Love to see Lee having a laugh at Amanda getting one over on him!

Tag time!!! Love how Amanda tells Dotty she was tied up! haaa so Lee’s idea wasn’t so dumb after all huh!
Dotty: Amanda, if you don’t have your memories, you don’t have anything!

Amanda: Mother, it’s not what you’re thinking!
Dotty: you’re too young to know what I’m thinking! 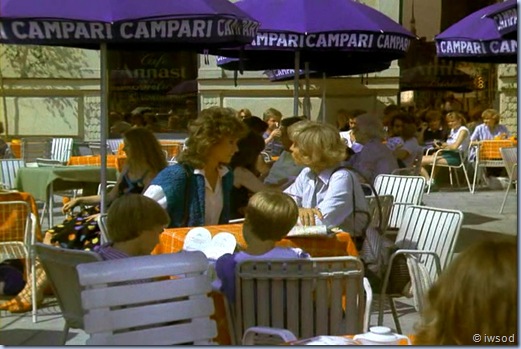 Not a very eventful tag for me.. but kinda cute! Amanda sees Lee and makes an excuse to wander off for a moment..  (surely Dotty can see them Amanda talking to that guy who scaled the wall and started punching that guy?! too weird!) Lee 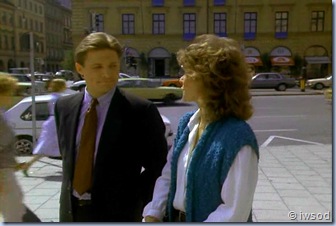 tells Amanda that Haddy the daddy is with his son now.. I think Lee just wanted an excuse to see her again! Well.. that and this show

never ends without them together- or at the very least it ends with one of them-thinking about the other!! (Lee’s tie looks too short!! It looks weird- Maybe he borrowed it from Francine

The rigged coffee can is still bothering Amanda!! don’t do that to Amanda again Lee! The cashier and box boy are agents? ( surely not!! apprentice agents maybe..

)
Amanda: Gosh. That used to be a simple

neighbourhood grocery store. Well. . . . Look, would you do me a favour? Would you not put any more winning contest tickets in my coffee cans?
Lee: You got a deal.

Amanda: Thanks very much.
Amanda turns to leave..but stops and turns when Lee says:  But I’d keep my eye open for the breakfast cereal boxes.

(and Amanda’s home never ate cereal out of a box again! 😉 Love how Lee has a good laugh here.. at the beginning of the episode he didn’t seem to want to show his good mood.. and hid his smiles- here- he is open with his enjoyment!! 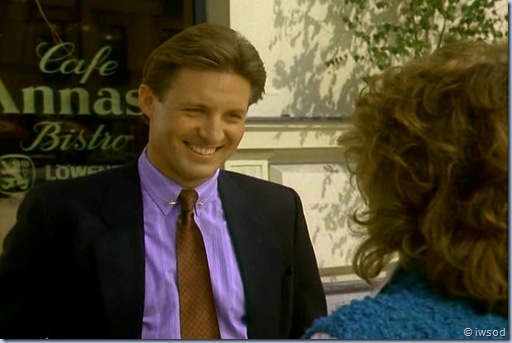 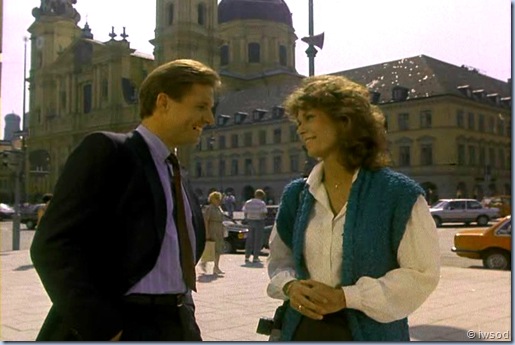 Amanda can’t help but smile at Lee’s joking.. yes I much prefer this Lee too Amanda

and.. there we have it.. the final frame of this episode.. so sad to say goodbye to Munich.. and Lee’s fabulous haircut.. but.. life in the spy bizz doesn’t stay still for long! Especially spy hair.. it grows very fast! ( sob..) next week we are back in LA err I mean washington. This episode has turned into an epic series of posts! I hope you have enjoyed it as much as I have – inspite of my narky comments about the action finales and the smk routines I do love it!!

As always, it would be great to hear any thoughts you’d like to share.. feedback, comments.. your own insights or questions.. peeves or fave moments in this episode? .. feel free to share them here with us all! byee for now!

EDITED TO ADD: Check out the following for a summary of Munich locations
https://justwalkwithme.com/2012/09/08/munich-location-map-the-times-they-are-a-changin2-02-our-man-in-tegernsee-2-07/
Huge thanks to Claudia for contributing this post!!! 🙂

30 responses to “9/9 Season Two, Episode 2: The Times They are a Changin’- Scarecrow and Mrs King”