Next thing.. we see Amanda sneaking out of the ship’s closed Casino!

Lee is in the foyer outside.. and catches her!  eek!

Lee: I thought you were in the bridal shop!
Amanda: I was. But everything was way overpriced.

And then I thought that C might mean casino. And

there would be a lot of number 24s in the casino.

Ha! What does Amanda care about the price of the dresses? and how does she know the going rate? I think it is more likely that  Amanda was looking at wedding dresses and felt a very sudden and intense urge to check out a possible clue, solve this thing and get out of there!!!!

She was very, very highly motivated in that moment to work on the case! 🙂 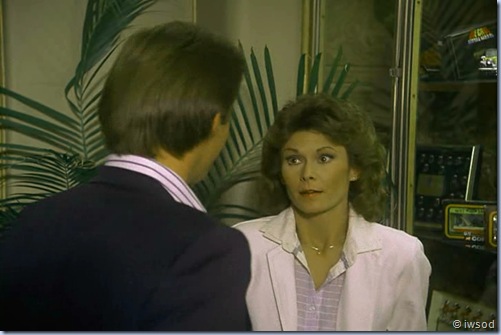 Lee: Mm-hm. I know. I checked it out. That’s my job, remember?  [Funny- Lee’s saying the same old line.. but.. for me- it doesn’t have the same sting anymore – I don’t think he’s terribly upset!

Do you agree? Disagree? ]
Amanda: Yeah.
Lee says: your job-
Amanda interjects: -is to help you. 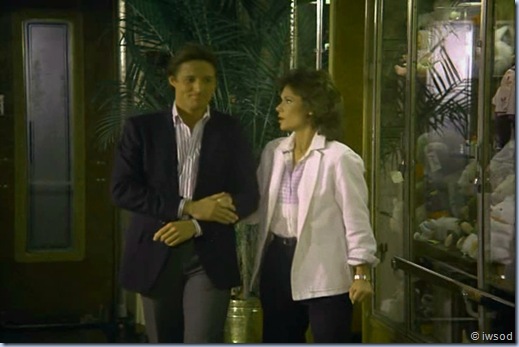 I love it! Amanda corrects Lee by finishing his sentence: it’s her job to help him! [It’s not her job to stay out of it anymore!]

And: Lee doesn’t argue with this!!! Squeeee! Old habits die hard.. and this line of Lee’s was IMHO habit! Maybe it’s just me but I am sensing a shift in their relationship – and am loving it!

hooray!  Amanda’s perceptive people skills are on display: and Lee is listening- this remind anyone else of that scene in A Class Act? Where Lee asks Amanda about all the other recruits? I think Lee looks to Amanda for insights: and I love it!!

Amanda: Lee, we’re not the only people on this ship who aren’t on the level. Did you notice how nervous Arturo was at brunch?
Lee: What do you expect? He’s getting married tomorrow. 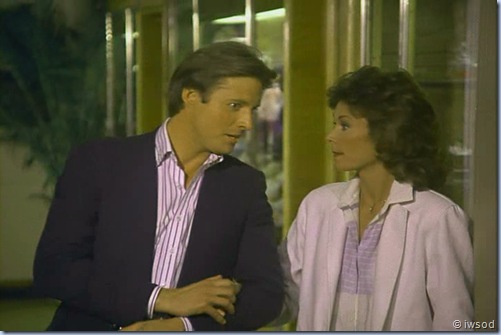 [A great line that! I love Lee’s expression when he says this! It’s like: I know I’m terrified at the thought!

] It was the kind of nervous you are when you’re hiding something. [Nice to see Amanda is wearing her engagement ring!] 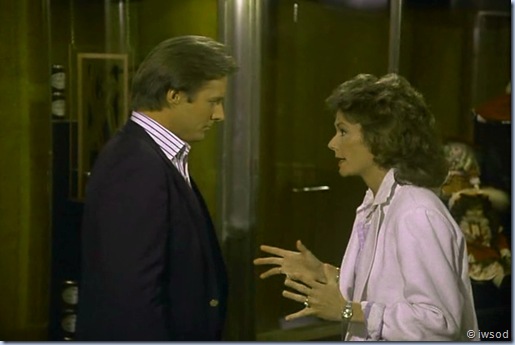 Lee: Everybody’s hiding something.
Amanda: Well, no, there was a little bit more to it than that. Did you notice how Carmen kept passing

him things before he even asked for them? [Who didn’t???!!!!] I mean, she put the cream in his coffee and she passed him the

sugar. It’s like they’ve been together for a long time.
Lee: So you don’t buy that bit about them only knowing each other for a 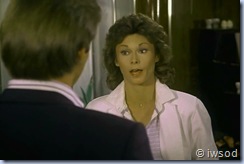 week?
Amanda: No. I think they’ve been married for a lot of years.
Lee: That’s pretty good, Amanda. 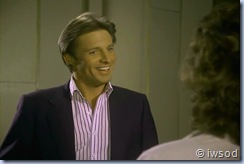 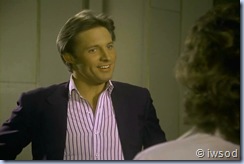 Whoa someone slap me- did I just hear that??!! Lee’s so adorable when he is appreciating Amanda!

Amanda’s not use to this! This is a long way from the old ‘ Not Bad!’

I’m not use to this! 😉 Amanda bows her head shyly but recovers very quickly.

I also love that Lee can see she is touched by this compliment- it has been a loooong time coming and he doesn’t step back from it – he seems to be proud of her, and happy to finally express it! Am I reading too much into this? from watching this moment frame by frame – I’m very touched by Lee here: I see some emotional maturity! Wow!!! Very swoonworthy!

Lee: Any other candidates for “I’ve Got a Secret”?
[I vote Lee and Amanda! 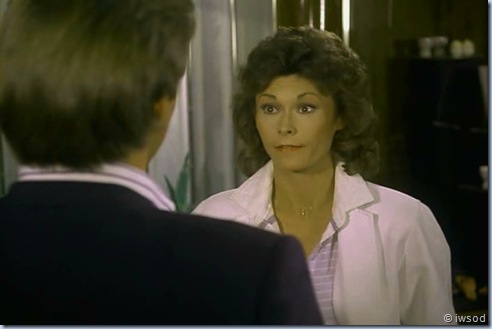 I think Lee is joking with Amanda here.. trying to keep things light. Do you agree?
Why would he do that?? Hmmm well call me crazy but I don’t think Lee wants to go back to the whole: ‘they aren’t in love’ discussion! Remember the last time Amanda said this about a couple?????!!!!!! The scene.. in Affair at Bromfield Hall?? down by the Thames??

If only Amanda had said Myles and Jillian don’t touch each other! Rofl!!! I am sure Lee doesn’t want Amanda to give another demonstration!

but it’s okay Lee, Amanda has a different set of evidence this time to back up her theory! This time it’s not based on ‘a feeling.’

Actually.. Amanda said the same thing about Eva in Lost and Found.. Amanda IS the resident expert!

she gets this right everytime!!!!

Amanda: No, I may not be an expert,

but I know what I saw. 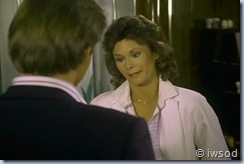 [Amanda pauses a second] phuh! She paid more attention to you… 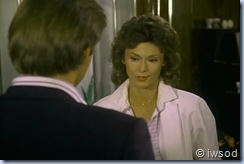 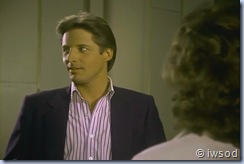 …than she did to him.
[Lee looks down and smiles.]

And besides that, they were 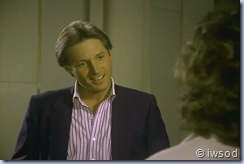 sitting way at opposite ends of the table… 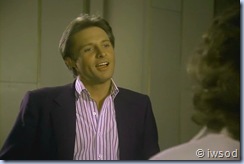 ….and they just don’t look like an engaged couple about to be married.

Don’t you just love how Amanda prepares herself, makes that funny little noise and then states Jillian paid more attention to Lee than Myles at Brunch?! So direct 🙂
– and Lee gets all bashful? This is very cute! and.. surprising!! I think Lee is use to women paying attention to him, and comfortable with that

but.. that Amanda noticed?? and it’s her pointing it out to him? I think that’s where this little uncontrollable reaction of his comes from –  As Amanda continues, Lee seems to need a moment to get himself together – he smiles like a little boy here who isn’t suppose to be smiling

It’s adorable!  (I notice too that he doesn’t recover as quickly as Amanda to sudden compliments!

) I also love that Amanda isn’t jealous.. I don’t think she could care less.. way to go Amanda!
BTW- I am loving this look on Lee-  the shirt with no tie and the blazer.. hoooo haaaaa..
Lee thinks Amanda could be on to something with Myles and Jillian..
Amanda: Are you gonna investigate them?  [You?? not we?? what’s this Amanda? You trying not to push your luck?? or do your own old habits die hard??]
Lee: I think I’ll concentrate on our friendly cruise director for the time being.
Amanda: Mr Rackam? 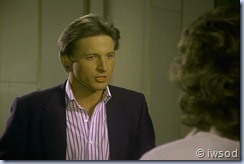 Lee: Mm. He can’t remember Orlando, yet every crew member that I questioned can’t forget him.

They described him as a hell-raiser.
Amanda: Well, why would Mr Rackam not tell the truth?
Lee: I don’t know. But I plan on finding out.

Duh duh duuuhhhhh! determined Lee is lookin good… and he’s on the case

Aie.. that is clunky dialogue..those last two lines! Why do you think Rackam wouldn’t be telling the truth? errr he has something to hide about Orlando! Just like Mr and Mrs Herring, and just like Myles and Jillian, had something to hide -ugh..!

Well I shall finish there for now..Adorable to see Lee and Amanda complimenting each other: this is new! They’re not quite sure what to do with it

My studies are back with full force.. posts may be shorter, and less frequent at times… I’ll see how I go but as always, I am encouraged to hear from readers- your feedback, your comments.. questions..what makes you laugh

whatever! I know I’m not the SMK ‘resident expert’ – so thanks for reading my ideas and theories anyway

Regular commenters:  if you are interested in contributing a post or two – on whatever SMK topic you like-[fave fan fics? fashions? car chases?

Thanks so much for walking and talking with me: I appreciate you guys very much! Byeee for now..