We pick up right where we left off..I didn’t want to leave you hanging for long!!!
Attentive and gorgeous Lee, happy to see Amanda, has arrived to pick her up and has entered her room all smiles!
Lee: Hi.. listen, I just talked to the doctor… 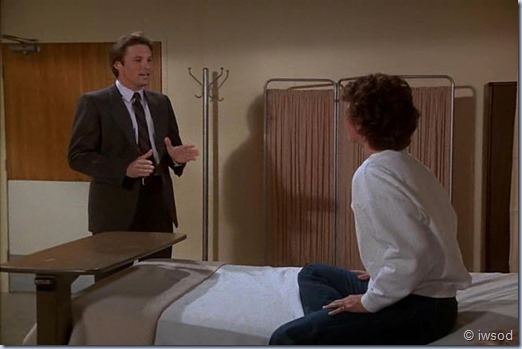 …and you can leave anytime you want.

]
Karen: like now?
Lee doesn’t answer her though.. he has come with something he really wants to say to Amanda.. [Nooooo!!!]
Lee: Ahhh Amanda…

…can I say something? 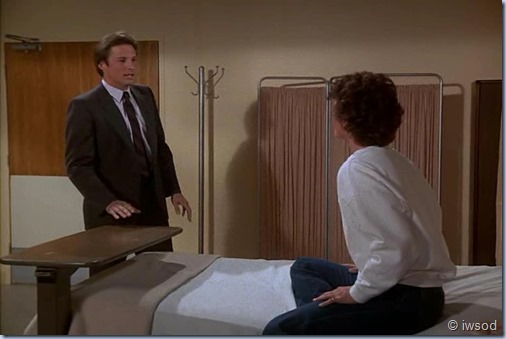 Awh!!!! he moves closer to Amanda and is very lovely.. 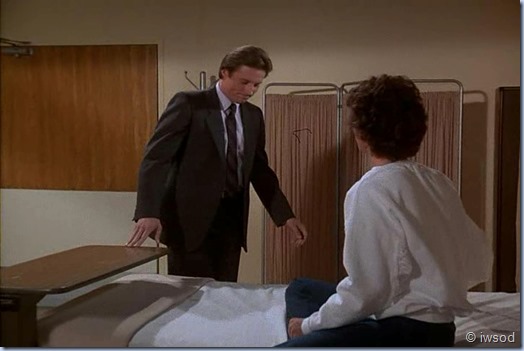 …I know what you’ve been through… 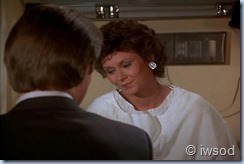 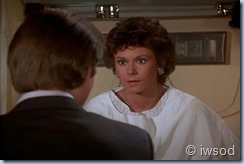 …I guess you kind of got caught in the middle of the crossfire-
Karen cuts him off: Ohhhh! Look come on now it wasn’t your fault. 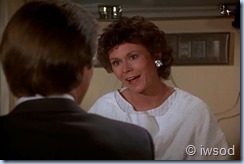 Lee gives her a huge smile.. relieved: Thanks!

Man.. I find this gut wrenching!!! After how long all us fans have waited- to see Lee be sooo darn sweet to what he thinks is Amanda but it isn’t??? – noooo!!!! [LOL nice way for the writers to demonstrate growth and progress- without actually letting the relationship progress 😉 )
Lee: Thanks… 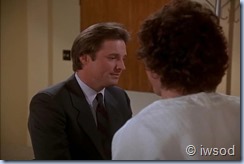 …I guess if I… well if I hadn’t busted the Redding operation..

if I hadn’t-
[so lovely to see Lee offloading with Amanda.. sharing his troubles.. he didn’t share any of this with Billy and Francine.. he came back to Amanda and opened up to her.. awh!!! Only.. it ain’t flippin Amanda!!! Nooo!]
Karen: Look!..

…You were just doing your job!…

…We all have to do our jobs. 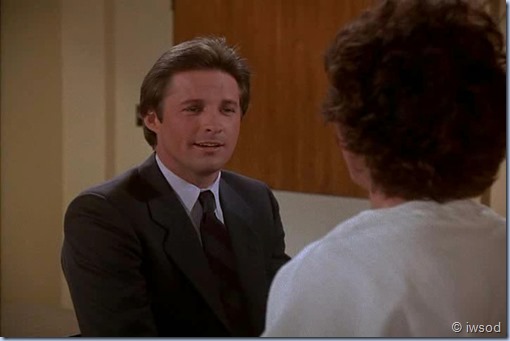 Of course I can’t wait to hear what you all think – to me this is the moment where Lee begins to wonder what’s going on with Amanda..
Lee hesitates a moment: yeah… 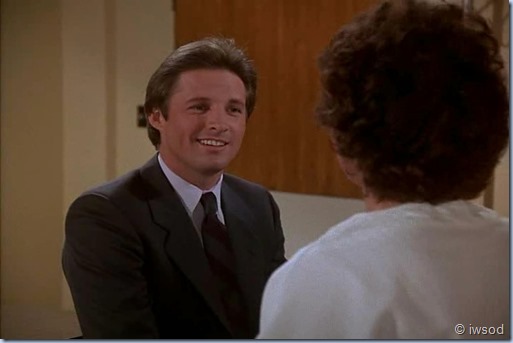 Lee’s smile here slips away as he is deep in thought – and not in a good way.. to me it’s not a wow… this woman in front of me is amazing (like we’ve started to see a little bit more!

) instead.. it seems neutral.. his superspy brain is in overdrive here.. what’s going on?? Something isn’t right…
Karen notices too: Something wrong? 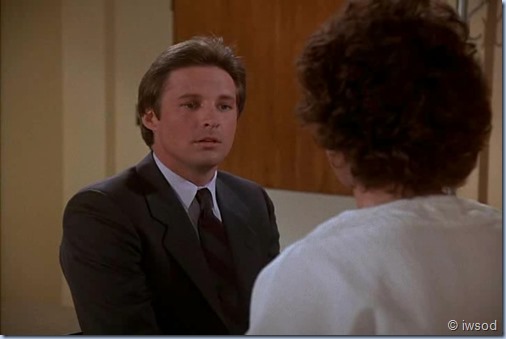 Lee looks her up and down here.. 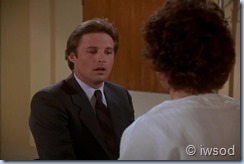 He’s trying not to be too transparent that an alarm bell seems to be going off here with Lee..[whooo it makes his voice extra gravely!!! *shivers* hoo haa!] 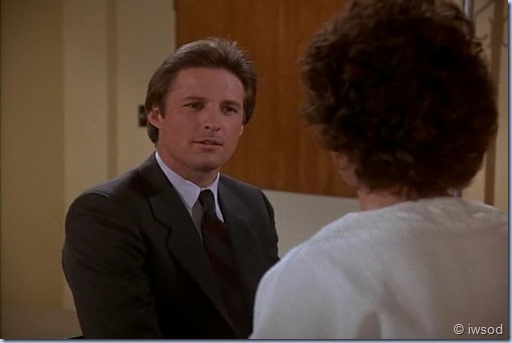 …I was about to ask you the same thing. 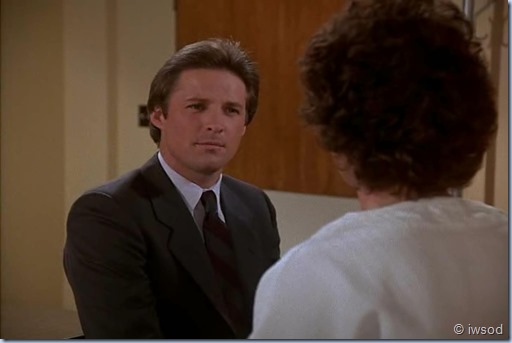 Karen tries to lighten the mood and act

casual.. I think she knows she isn’t going to get away with this for long at all!! But.. she 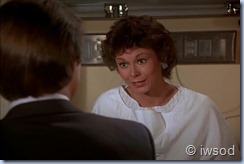 hopes long enough to at least get him out of the hospital!: ugh.. well.. Yeah.. I really hate hospitals… [the Bluebell hates hospitals? I don’t think so…] …I’d really like to go home now. 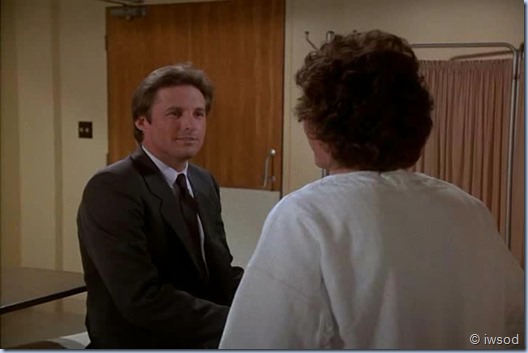 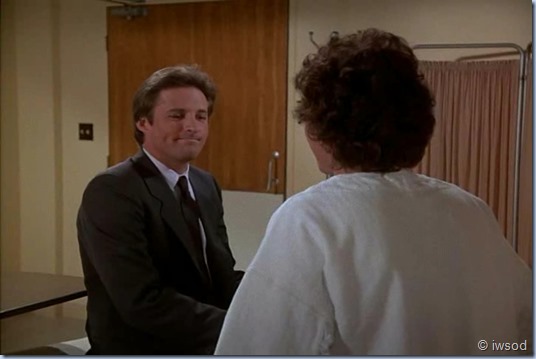 but that was way too easy.: Yeah sure!

Lee smiles and acts casual.. he’s hiding his confusion here IMHO.. Then Lee says naturally: Ah but I’m afraid you can’t go home. Not just yet. You’re going to have to stay at that hotel until we find Gordon Redding.

Lee watches Amanda closely here, though outwardly still casual. I think this is a test on his part this statement..
Karen nods silently in response (whoa! well that’s definitely not what the real Amanda would have said in response to Lee’s statement! Amanda? silent??!!! teee hee that’s pretty rare! 🙂 )
Lee continues: The agency will pick up the tab.

He opens the door for her, and lets her past.. as we see the door close, we notice Lee is

walking away but hesitates a moment looking at the ground as they leave.. 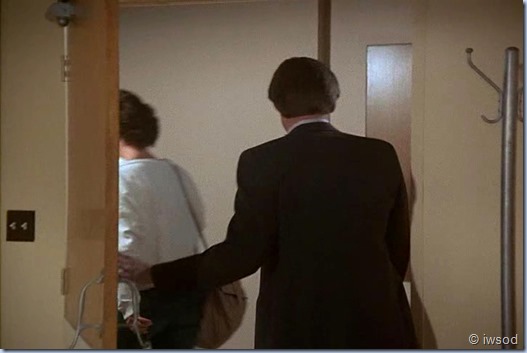 The scene ends here.. so I’ll come back to Lee and Karen’s next movements in the next post.. but.. Come on everyone! What do you think is going on here?? do tell!! and don’t feel you have to agree with my ideas.. (though of course I’d love to hear what you think of them)
Go for it!
So what is Lee thinking here?? I’ll share my thinking.. and look forward to hearing yours!
A couple of things give Karen away..  it really isn’t long before he suspects something isn’t right. Firstly, he knows he spoke on the phone to someone who sounded just like Amanda – so he’s already on guard about that.. not that he could be thinking there is a doppelganger around of Amanda.. but he knows there are strange games afoot (plus that chimed music everywhere makes Lee really suspicious!

Then.. IMHO Amanda isn’t usually at this stage of the story very forceful about having a job to do.. that comes later – and seems to Lee to be different. The script says ‘Lee studies her for a moment. vaguely disturbed by something he cannot identify.’ (in reaction to that line about ‘we all have a job to do’).. interesting!

There’s also the fact that ‘Amanda’ barely raises a peep when he can’t make things better for her family – we all know Amanda has been making lots of noise about that!!! Amanda is not this easy!!!
Lee might be wondering: Have the medical tests got it wrong? has the gas done something to her??

Lee can’t possibly join the dots here.. but there is one more thing IMHO which would have set Lee’s alarm bells ringing – this isn’t in the script or anything.. I like to think it’s how BB played it.. but I see Lee as being very aware of Amanda at this stage of the show, he cares for her very much, and he is fighting strong feelings towards her – He’s sexually attracted to her – there’s a zing when they are together- you know?? But with this Amanda?? when he looks at her- there is suddenly nothing??!! There is no spark..something’s different!
As Amanda said beside the Thames in Affair at Bromfield Hall  about Lady Bromfield not being in love with her husband: ‘There’s nothing in her eyes!!’ Same here with this Amanda!!! There’s nothing..

Also, there is nothing he is fighting to keep control of.. he feels nothing – where did that feeling go??? I think he has had that feeling since the moment he met Amanda- years ago – and suddenly it’s not there- so he reeeaaally notices!!!! He was excited to see her when he arrived.. now?? there’s no excitement.. just unease!!

I think this is one reason why Lee is utterly confused – how can that spark just suddenly disappear like that? Does that happen?? Maybe things weren’t special with Amanda.. maybe he got what he wanted and it went away! LOL…  I think it would be very disturbing!! [I like to think this episodes answers this one for Lee

but I’ll get back to that!]

This idea of there always being an undercurrent of sexual awareness between them  reminds me of the moment in I am not now, nor have I ever been a spy. Lee is telling Amanda they are co-workers.. but it’s like Amnesiac Amanda can sense there’s a whole lot of something going on between them – so what he is saying and what she is reading from him (Mr licking his lips and looking her up and down!)  and her own body is completely contradictory!

I like to think their bodies know before their brains do.. tee heee.. and here? Lee’s body is saying – this ain’t right!

A shame it got wasted on Karen!

I hope I’ve made some sense here! And look forward to hearing from you all! Do you also feel sad that Amanda doesn’t get to have Lee say these things to her in this moment?? This is a big one sorry! but no way was I splitting this scene! Okay byeee for now.