Lee: The Good, the Bad and the Wet – Part one

from Learjet! A little diversion from our usual walk: these two posts will continue on the theme of clothing in SMK, seasons one and two. We’ll be looking at Lee’s bad clothing choices and the surprisingly large collection of “Wet Lee” moments – all your favourites will be there, and more that you may not have noticed

. In  the second post, we’ll be exploring Lee at his best – smart and casual.

We’ll get Lee’s unfortunate fashion moments out of the way first. So many wonderful moments in Service Above and Beyond, but the grey “plastic” jacket is not one of them. 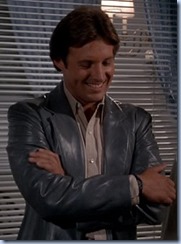 Coupled with a beige shirt, this is not a good look. Just my opinion, but Lee should stick with blue, black, grey and a bit of red. Brown, beige and (worst of all) mustard are not his colours. What saves this moment are those dimples. And those hands.

I’m going to avoid discussion of ties – I bow to KC’s expertise in this field – but I will briefly mention this terrible combination from Service Above and Beyond. 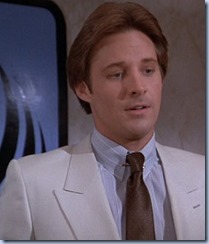 IHMO, brown ties should be universally banned, as should cream jackets and combining them with a pale blue striped shirt and (to crown it all off) a gold-coloured tie pin

And while I’m on the subject of bad tie/shirt/jacket combos, we have the cream tie in The Long Christmas Eve. 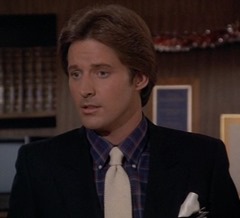 Other components of the nonsemble would work well – on their own. But the combination is cringeworthy. 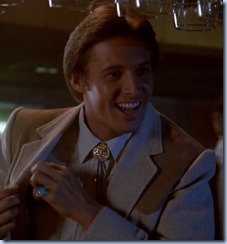 Speaking about “ties”, this may be the place to “showcase”  the sparkly horror bolo tie (The ACM Kid), with Christmas cracker-style (un)matching ring (not how you want those hands highlighted!): 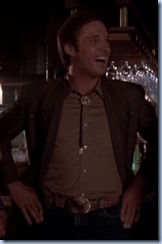 The next two shirts are my worst Lee shirts –

the one with the weird neckline, flap-over thingie (Saved By the Bells) – hideous! And combined with those nasty grey melange trousers, Lee looks almost dumpy. And grumpy

And then there is the creamy collarless shirt with the mysterious, huge University of California red and blue badge. Yuck 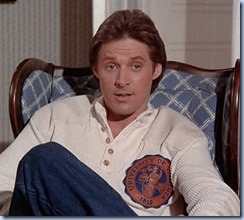 The eye is drawn to that badge. The jeans don’t even help. 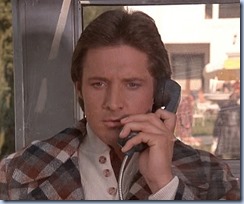 Add a strange checked jacket into the mix and, well, the badge is mercifully concealed but the jacket is nearly as bad. And, oh no, there’s guyliner now…

Speaking of cream and bad jackets, I’m reminded of the cream polo with the twin jackets in The Affair at Bromfield Hall. Which is the worst? 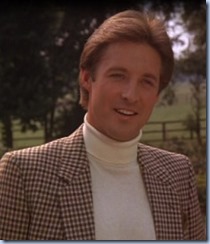 The checked one is like an overbusy chess board (and accompanied by lashings of guyliner),

but I think the shapeless, strangely coloured affair is particularly unflattering. (Is that a hint of tum

?) For once, Lee looks worse the scenery. London definitely wins out.

On the subject of  the polo-neck (AKA roll-neck, skivvy, turtle-neck), here is the exception to the “Lee looks good in red” rule (and this is something coming from someone who loves red and appreciates Lee’s – um – good looks). 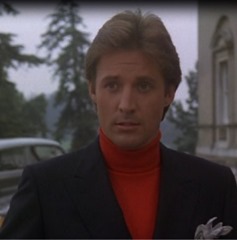 I think the red is too tomatoey; Lee needs more of a blue-red. And what is that flower-like hankie in the jacket pocket? Looks like a girly hair accessory! This also comes from The Affair at Bromfield Hall. Brian Cox, costumer for men in this episode and for To Catch a Mongoose, I’m looking at you! Lee looked so good in the latter episode. What happened??

Then there is the spotted cravat from Weekend. 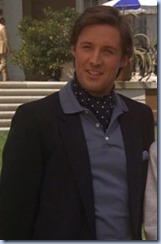 With a polo shirt. And a jacket.  Nooooo

. I actually like the colours – they look good on Lee, but the pseudo-upper class look is silly. And I don’t like his hair. Plus there’s a matching umbrella sticking out his head.

Last, but not least, our suave man-about-town is transformed into

an American tourist in his loud Hawaiian shirt in the Munich beer garden (note the obligatory camera around his neck: “subtle” SMK code for “tourist”). He puts Sam Axe from Burn Notice in the shade

in this fashion horror.

The good news is that Learjet’s selection of bad Lee moments is over. From now onwards, it’s pure joy

Here follows the shallowest section of the Clothing posts collection.

To start with a few outliers that don’t fit this category but are in the spirit of “Wet Lee”. Who could forget the open shirt in Here Comes the Neighbourhood? 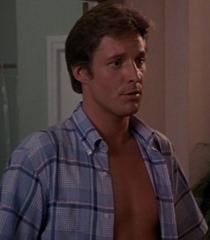 Does anyone else think that this, combined with the show pony tux moment in The First Time were specifically inserted to hook susceptible female viewers (i.e. any female aged 8 year and up)?

Lee with  a hint of  bullet proof vest (The ACM Kid): 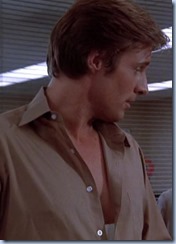 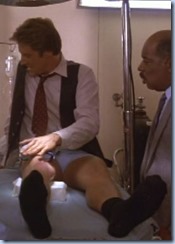 Lee in shorts at the hospital (If Thoughts Could Kill). I’m afraid the grumpy child attitude spoils the legs for me.

. And the socks also showed up in Sudden Death, as Kiwismh pointed out.

This, along with a later reference to Lee’s blue boxers, has spawned a web-site, a few handles and more than one fanfic. I had a pair of these in the 80s – they were called “silkies” at the time) but I certainly didn’t look this good (in fact I looked pretty awful – all the other little girls had ankle boots and fluoro clothes and nail polish.)

And our first sighting of Wet Lee was in The First Time. He and Amanda had just escaped from the party where she was, as she said, “hideously underdressed”, and got soaked after another car hit the fire hydrant. 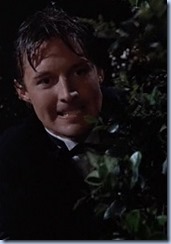 Here he is, in “that tux”, in Amanda’s garden, waiting for her to pass reams of blue kitchen roll out the window while having a little chat with Dotty.

We have a long wait

until our next Wet Lee sighting, but it’s worth the wait. He’s hanging out the shower at the Cumberland in Weekend, while Amanda frantically calls for him as she was the kidnapping on at the tennis court below their window. Can’t you step out the shower for us, Lee

I think this is the most we see of Lee in the whole of SMK. And it’s not much

Next we have the “Colin Firth as Mr Darcy” moment. Lee and Amanda jump into the moat in The Legend of Das Geisterschloss. 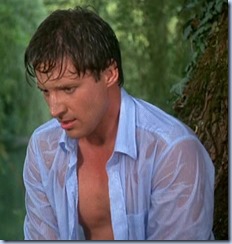 For the shallow fans among us (including myself), this one of the visual highlights of the series. Blue shirt

. Vivid green in the background

The last two Wet Lee moments are a big comedown. 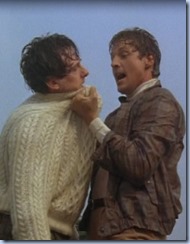 One of the previous worst Lee outfits, but wet (in The Affair at Bromfield Hall) – an improvement on the dry version of the jacket, but not up to the Mr Darcy look:

…and Wet Lee in a Suit (Spiderweb). 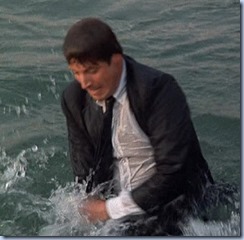 IWSOD acutely observes that BB appears to be wearing a wetsuit under his shirt. Not very exciting for the female viewer.

So there we have it: the Bad and the Wet. I’m trying to put the Bad out of my head and have picked my favourite Wet or similar moments for you to choice between. Which is your favourite Lee?