2/2 Just Walk with me– Through Lee’s Season 1 Apartments! By SilverCorvette

As you enter, on your left there is a table with shelves below and above, then the stove and opposite is a counter with a sink with a window over the sink. 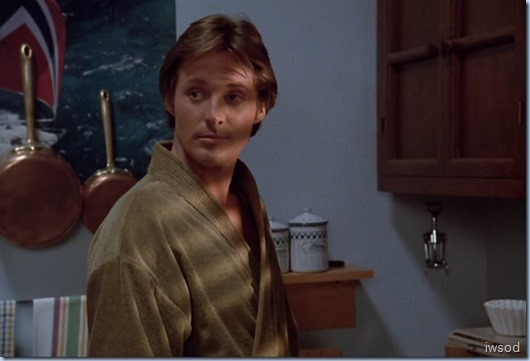 We see the early morning sun shining through the slats of the window shutters, on Lee.

Really, a big print, sailing and skiing posters in the kitchen ? And is that the picture that’s later in the entry ? 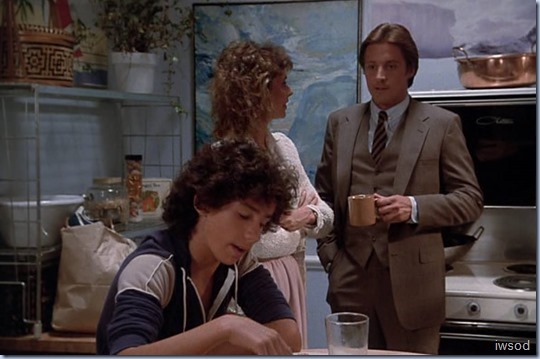 The table must be able to be moved to where it is now, it was not there when Amanda looked in the fridge

Who took all the copper pans off the wall ?

Civil war art on the kitchen wall? I think this is in the living room in ROTP 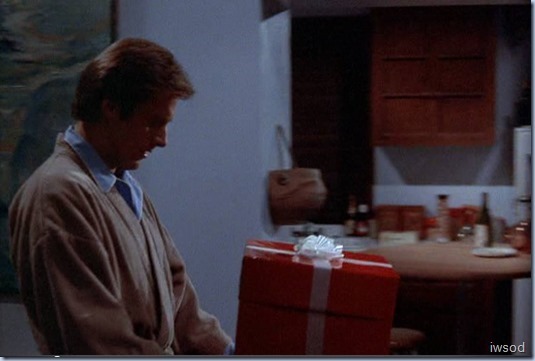 The table and stools are there, between the sink and the fridge, in ROTP as Lee walks past.

And lastly, Lee’s Bedroom which we see in ROTP and IANN..Spy

Darkish blue walls and squared wallpaper – a room that can’t seem make up its mind whether to be dark and cosy or light and airy. 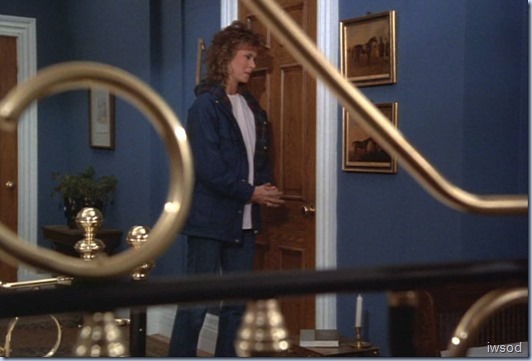 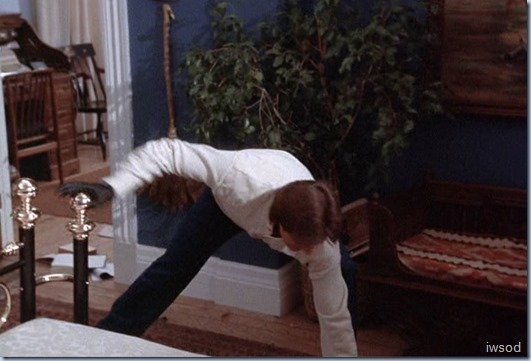 To the right of the door is an alcove, with a plant and a bench seat in ROTP but the plant is gone in IANN..Spy.

The hanging thingy by the door was replaced by two pictures of horses. Plants in the bedroom ? Not in my house !

Nice brass bedstead – not what I would have expected though and Lee had made the bed (because he was supposed to be dead?) White bedspread Lee? I would have thought dark blue ! 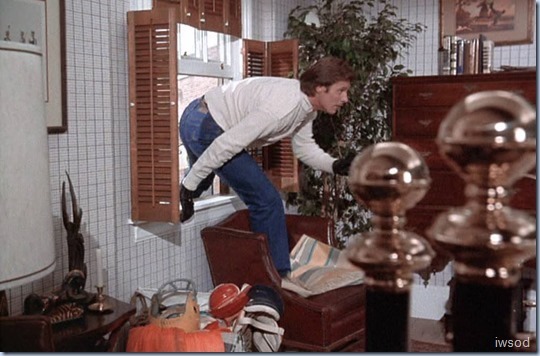 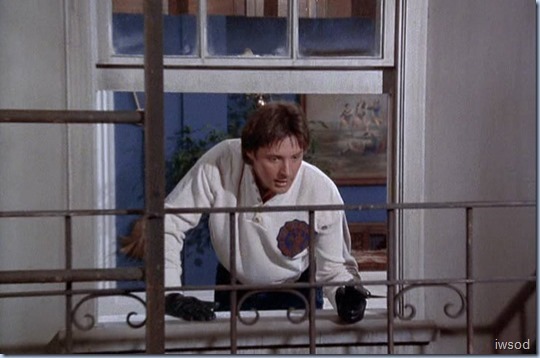 Bedroom window with the fire escape. The window is opposite the door- does that mean the apartment is a corner one – the bedroom window would be at right angles to the one in the living room (or am I being too pedantic ?)

So what’s the door to Lee’s left, beyond the door to the living room ? Does it lead to the angled corner room you can see in the outside shots ? Or just a closet for the tux ?

Another bedroom ? If there was another bedroom, why did one of them sleep on the lounge (ACM Kid) and Amanda in Lee’s room (IANN..spy) ?

I think the doorway where Sinclair’s sword is sticking out must be the bathroom, and it’s green (below)?

I am glad he got rid of that pointy plaque thing on the wall behind him, when he had the wall painted dark blue. (Imagine, Lee painting a wall, especially in Season 1 – ROFL !)

(IANN…Spy) Books have been replaced by soldiers on the top of the drawers, no plant in that odd thing on the wall over the TV ! 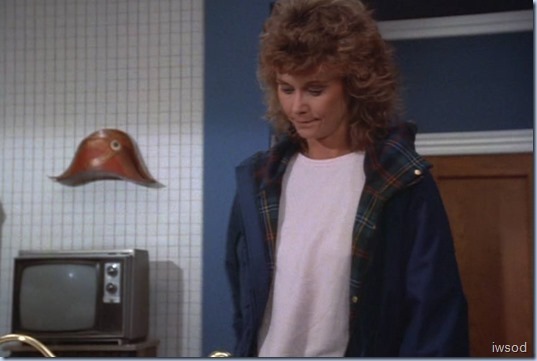 So there we are, we have seen Lee’s apartment in 5 episodes.

This seems to be the same one in all 5 episodes. The layout and décor is pretty much the same, except it seems to be in two different buildings.

We also see Lee at home briefly in “Always Look A Gift Horse in the Mouth”(ALAGHIM) but only the area near his desk as he talks on the phone.

This seems to be the layout, although I think the dimensions and scale are a bit off. 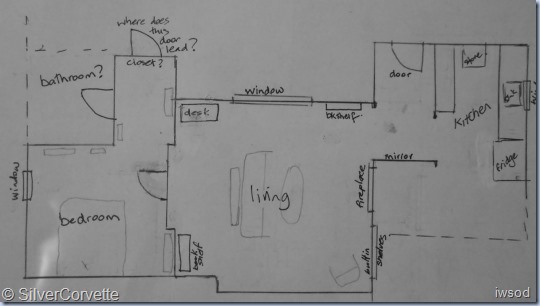 The thing that bothers me the most is all those plants. Lee grew up with a bachelor uncle on air force bases – I can’t imagine that either of them were particularly fond of houseplants. With Lee’s current casual approach to housekeeping, I would have thought that watering all those plants would have come way down the to-do list and wouldn’t they have all died when he was away on assignments ? Or are they artificial, and would he dust them ?

But, what do I know ? (I have killed many houseplants over the years and now I don’t bother with any) Maybe Lee really loves his plants and has a bit of a green thumb?

Fred Fielder tells Amanda that Lee is roughing it at the Watergate West. We found out that later Lee was undercover trying to catch Edson Ballon, so he probably did not really live here, but, I thought, why not? 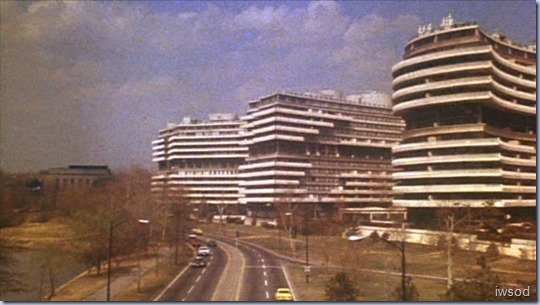 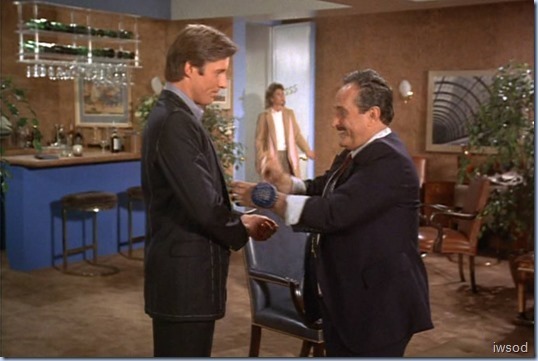 This one is number 555. Two blue chairs and two brown chairs, fancy bar, lots of plants.

Someone was fond of blue and brown – Amanda’s kitchen and even Lee’s first apartment as basically the same colours. 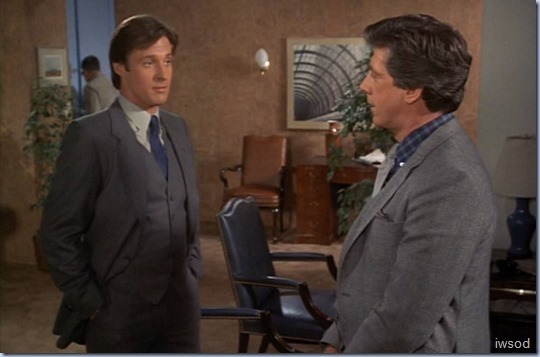 We probably did not need all these pictures of this apartment – but I do like Lee in a 3-piece suit ! 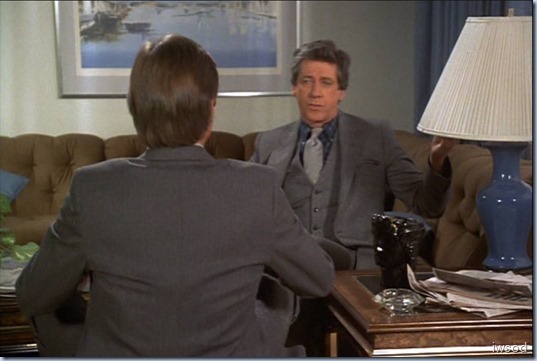 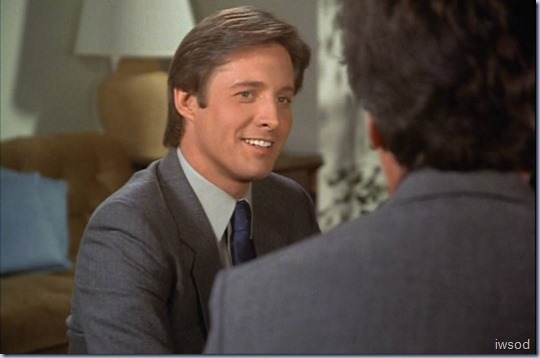 Is this an apartment, or a hotel suite ? For a few days to a week, you would assume it was rented fully furnished.

I would really appreciate your thoughts and comments, especially if there is anything I did not notice.

Have I missed any episodes where we see Lee at home?
-SilverCorvette

This entry was posted in General SMK, Guest Contributor, Season One, TOPICAL SMK and tagged Scarecrow and Mrs King. Bookmark the permalink.

26 responses to “2/2 Just Walk with me– Through Lee’s Season 1 Apartments! By SilverCorvette”