Happy New Year Everyone! 🙂
A new year, and a new episode!! Here we are at episode 21, nearly at the end of season 3!! It’s only taken 5 years!!!!
oh my gosh! Anyway, I’m looking forward to discovering Three Little Spies – I know it’s been at least 5 years since I’ve seen it!

A massive thank you to Melissa R who has kindly transcribed this episode and shared it with us all – Melissa R- we salute you!!!!!!

Okay.. here we go.. the episode opens with a peaceful brook.

The shot pans up and we see high cliffs.. 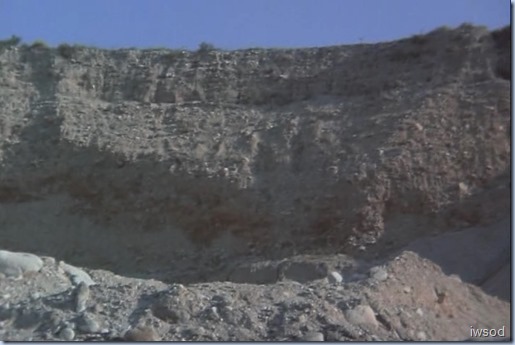 Hmm… could this be the location of that oh so scary bulldozer that was zooming toward Amanda in You only die twice?! 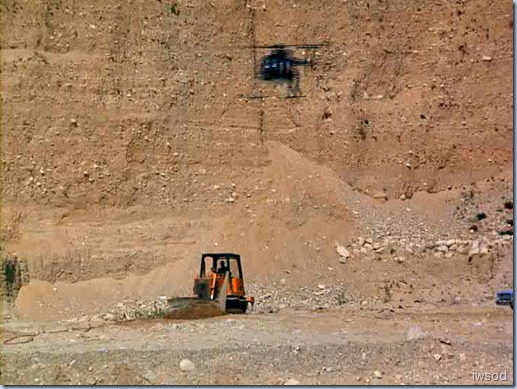 Maybe.. Maybe not..
Anyway, a jeep zooms past..

Closely followed by a tank of some kind with a mounted machine gun shooting at the jeep. 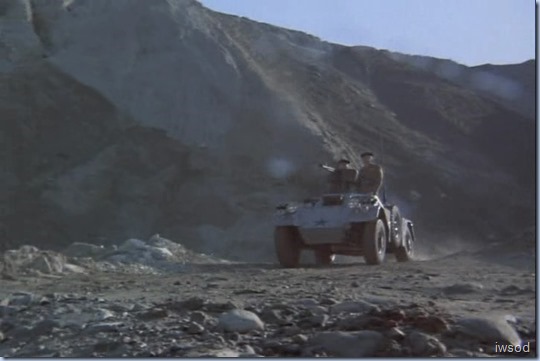 we see the bullets just missing the jeep.. 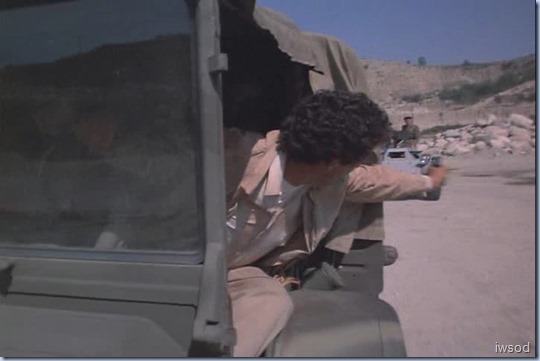 A guy we don’t know leans out the jeep and shoots back.

We then see the machine gun bullets hitting the jeep’s load. The chase continues, and we eventually see another jeep join the chase.  rofl. I’m sure they just used that same shot of the guy leaning out to shoot at the tank behind him! 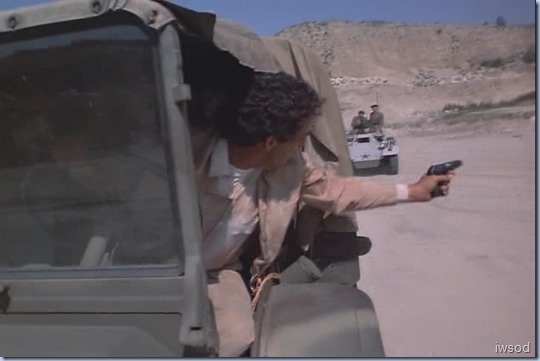 The jeep that joined the chase also has a mounted machine gun.

It too shoots.. they gain on the jeep. and cut it off..

All these shooters get out looking very mean!!
Whoooo…They seem to have different uniforms – like this is a couple of different armies working together?
[Rofl at the telegraph poles in the distance when this is a remote location in Afghanistan

They look and find the driver is now dead.
Together, they walk to the back of the jeep to check the load. they find boxes of…

LOL- Cornbread mix!
Not sure if these soldiers were expecting to find Ron’s Mom’s Cornbread mix! rofl!!! [Is this Ronald G.Smith’s mom/mum? or maybe Ronald Reagan’s?]
Awesome smk humour. reminds me of the start of Magic Bus stealing the water!
The scene ends here..

We move on to a close up of a hand marking a map of Afghanistan.

the shot widens, it’s Billy with a massive random map on his desk lol. He just had to put a pin in Afghanistan so he can find it again on the map!

Lee: Cornbread mix?
[Oh hoorah!!! no plastic jacket… so glad the suit is back when Lee’s at work!]
Billy: That’s what the label said. The surprise inside was one of ten nuclear detonators that was stolen from a Harrisburg arsenal. [Wow. Ron’s Mom’s Cornbread mix really packs a punch!]
Lee: Harrisburg?.. 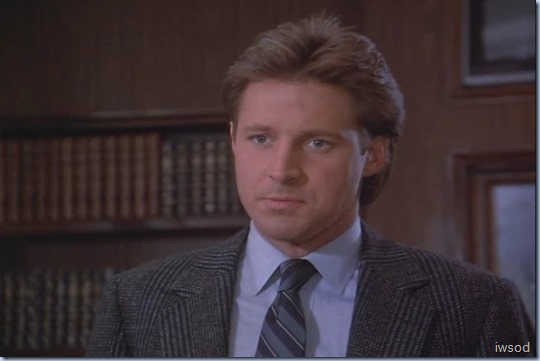 [um not a fan of this jacket! but.. I’ll take it over the plastic shiny ones any day!]
…Oh, I’ve been opening and closing that file for the last two years. Nothing but dead ends.
Billy: This Pakistani national that the Russians and Chinese just nailed; opened it again. [Ah so it was Russian and  Chinese army] 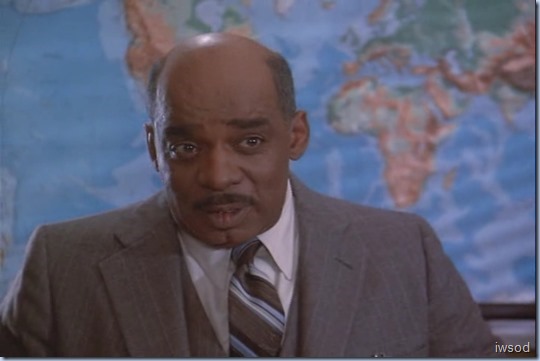 Lee: Pakistan? Why would they want a nuclear detonator? They don’t even have a bomb.  [Oh boy.. the 80s were such a simple time!

Aie, I think I’ll leave contemporary events to one side.. ]
Billy heads out to the bullpen with Lee following. They join Francine. [Can’t wait to hear what the fashion police make of this outfit!]
Billy: That’s right! Because the nations that do have the bomb have an agreement to prevent the spread of nuclear weapons. 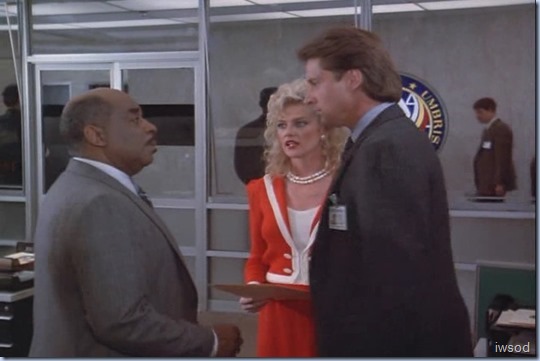 Francine: Ahhh which the Chinese and Russians think we just broke.

Francine: Yes they do! And they’re very testy about it!

Billy: What’s the word from the White House, Francine? 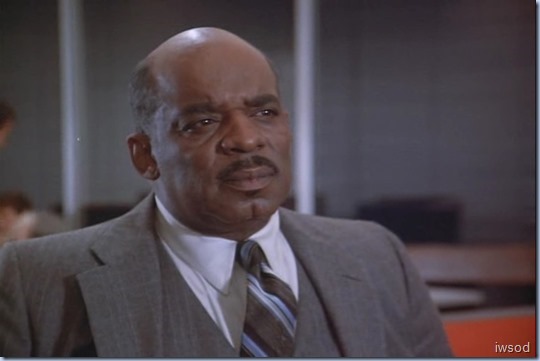 Francine: Oh plenty! But to translate all the diplomatic double talk the President admitted to the whole thing. [What? giving Pakistan detonators? 😉 ] 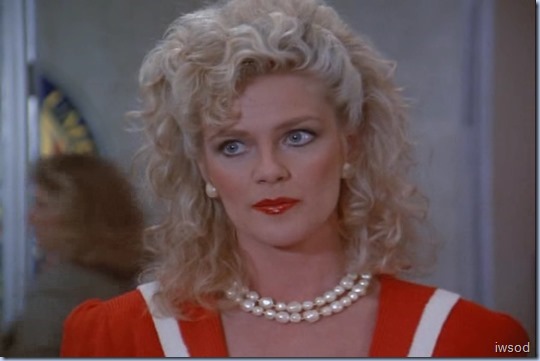 This is all very scary. I mean, just look at how heavy Francine’s make up is! Oh yeah,  there’s nuclear shenanigans going on too

Billy: He told them about the other stolen detonators?

Francine: All nine of them!… And he also told them about the integrated guidance gyros, the U7 back up actuators, and the system 8 adaptability.
[whoa.. sounds really scary!!! whatever all this stuff is!] 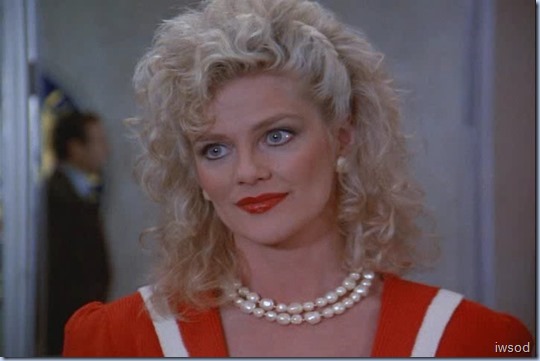 [I wonder if Jamie and Phillip are working on a little side project this week involving nuclear detonators, cornbread mix, integrated guidance gyros, U7 back up actuators and a system 8 adaptability

]
Lee: All the ingredients for a nice little Armageddon!

[Yup, Cornbread Armageddon!
oh dear, I really hope Jamie and Phillip are not working on a side project this week!

Francine: Ummm…Hummm…
Lee: We’re going to hear about this for the next couple of arms talks. 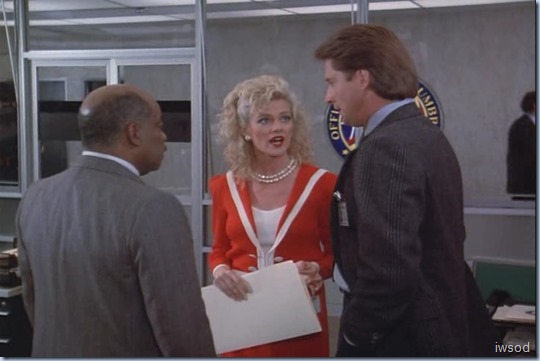 Francine: No, actually not! Gorbachev and Zhao saw the President’s revelation kind of like a beginning to an open and honest exchange between countries.
[Gee maybe that’s why the USA president spilled the cornbread mix.
Wait a minute..I need to get my head around all this….
Ronald Reagan was president. This was 1986. Just checked my little USSR cheat sheet.. Gorbachev was leader (general secretary) of the communist party….  and.. Zhao Ziyang was the general secretary of the communist party of china. Okay good. got that straight I think. I don’t know much about Chinese politics so maybe you guys can help here? or this episode will at least expand my knowledge a little! Here’s an image of Zhao with Ronald Regan back in 1984]
Sorry.. end of political history recap. On with the episode!
Lee: Humm…
Billy: Which means they want something.

Francine: Yeah.
Billy: But what?

Francine: They want an international task force set up to find the detonators…

…Isaac Petrovich from the KGB…Chien Chang from Chinese Intelligence…and the US agent originally in charge of the stolen detonators.

Billy: See this John Hancock?
Lee: No I…

Billy: It’s the President’s. This is a Presidential order! It’s the kind of order we follow!..

but.. he doesn’t have to be happy about it I guess

]
…Let’s get the ball rolling, Francine.
Billy takes Francine by the arm, they begin to walk out of the bullpen. but Lee stops them.
Lee: Billy! Come on you know Petrovich! You know Chang! They’re a couple of cold blooded killers… 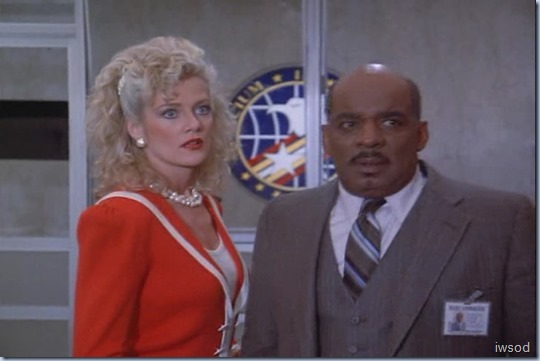 …Hell, I wont even be able to turn my back on them, let alone work with them! 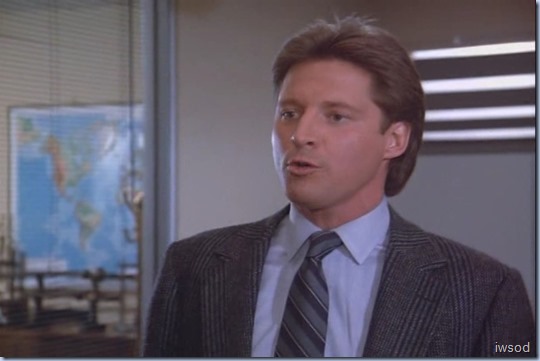 [Michael Weston from Burn Notice taught me that spies regularly have to work with people they don’t trust!… It will certainly remind Lee how lucky he is to be able to work with Amanda, who he 100% trusts!]
Billy: Lee you’re just going to have to try!

Lee: Well then you’re going to have to give me two more agents to keep an eye on those two blood suckers twenty-four hours a day…

[Will Lee get danger pay?!]
Francine: Well, ah excuse me, but according to this agreement here it says only one agent per country… 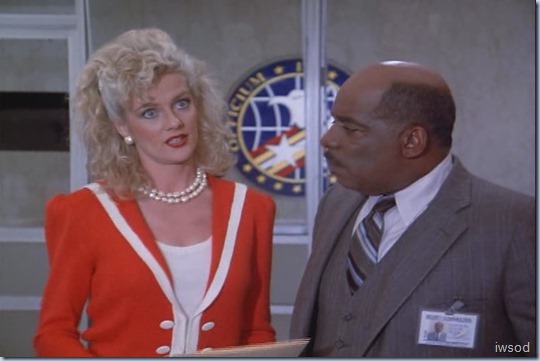 [At least Francine sounds regretful about that!]
(They’re silent a moment. Letting this news sink in.)
…But it doesn’t say anything about working with a non-agent. 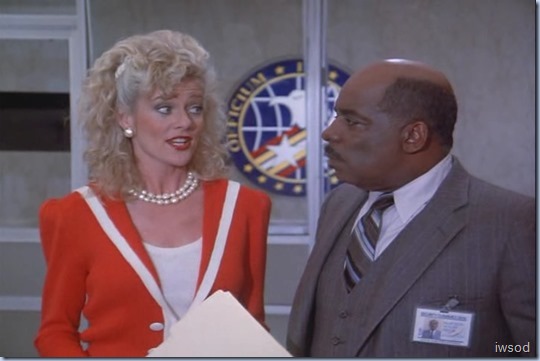 (Another moment’s silence.. )
[As the old scarecrow brain gets his head around this one.. ] 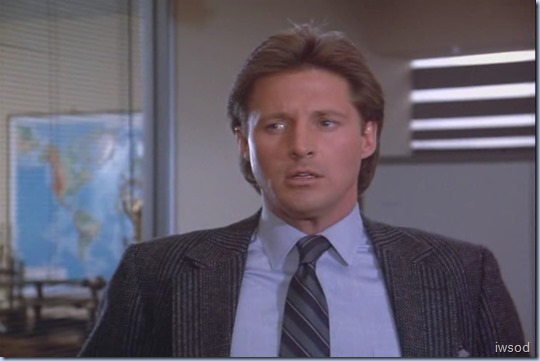 Billy cottons on and seems to like Francine’s suggestion. 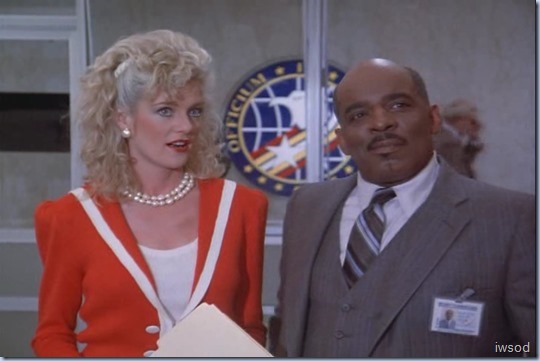 …In with that pack of jackals? Are you crazy?..

[At this Billy again motions to Francine to leave the bullpen. Enough Lee, suck it up!]
…Come on they’ll turn on you just like  that! I need help!!

Billy just turns and quietly responds: I know it. 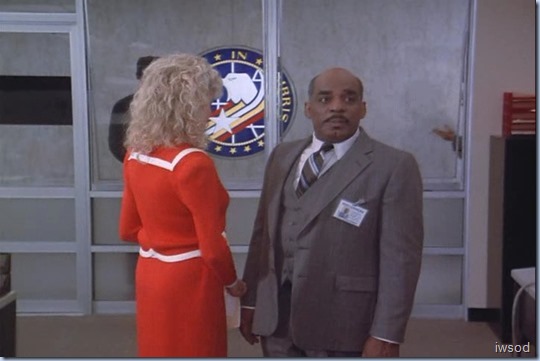 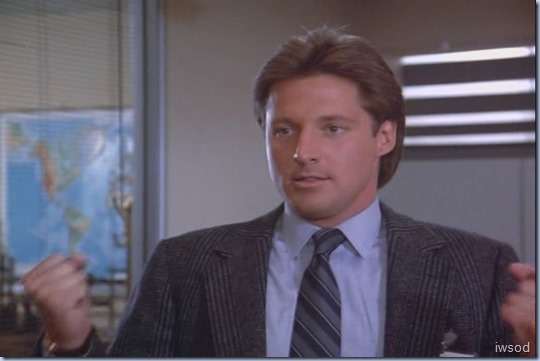 and seems to release them.

This fight is over.

What an interesting scene this one is! The first one? not so much.. but this bullpen scene is new! Not unusual we have Lee trying to argue with Billy about taking on a case. lol has that ever actually worked?!
What I can see that’s new is: *gasp!* Francine actually suggests Amanda for the job!!! Then again, it is a job with 2 extremely dangerous foreign agents soooo I’m not sure if this is a vote of confidence or some wish fulfilment here

Lee seems extremely rattled by this set up, and doesn’t seem to be afraid to admit it – Lee crying out that he needs help? I think this is quite vulnerable and new. what do you think?

I don’t really mind that he thinks Amanda is not enough – I don’t think it’s  a reflection on her, it’s a reflection on these two jackals/weasels/bloodsuckers me thinks.. Anyway, Lee has no choice, Ronald has given his orders. I guess now not only does he have to worry about the two jackals and his own safety, he’s now got to be worried about Amanda’s also..

Memories of this episode are soooo vague to me! Because it’s not a milestone type episode, I don’t think I paid it much attention when I first got hold of these episodes to watch oh about 8 years ago I guess it was..

Is anyone else flying blind on this walk? So excited that I get to walk through this ep with you all!!!! Helllooooo!!!! Any thoughts starting out everyone?