Ho, ho, ho!!! Merry Christmas!  I hope you are all nice and cozy and warm (well, nice and cool for you Southern Hemispherians) and hopefully at home or with a loved one somewhere enjoying good food and drink – not beans, herring and wodka with the KGB!  Although I hear herring tastes better after you’ve had some wodka

Then again, I suspect there may be one or two of you out there would would gladly eat herring with the KGB if that meant you got to be Lee’s nursemaid for a night and sit on his lap and sing Christmas Carols.  Hehehe….

Look out!  The bullets are flyin’!  Dive for cover, Scarecrow! 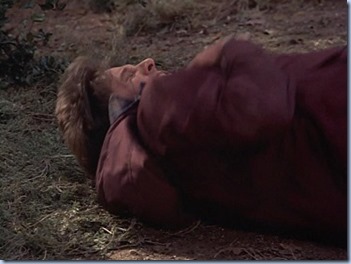 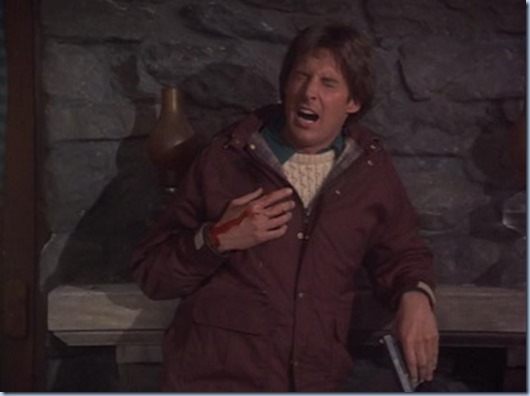 Ouch!  Now that’s gotta hurt!  Okay, Lee’s shot in the chest, so how does he get that blood on the back of his hand?  Did he get a cut or something while diving for cover?  Shrapnel embedded in his wrist?  Anyone got any ideas??  Or is this a blooper? 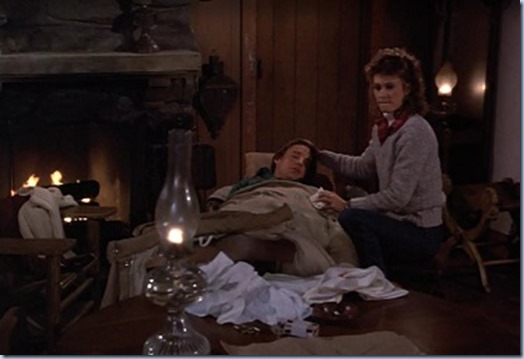 Lee’s been shot and looks like he’s hurt pretty badly.  Night has fallen and Amanda is very concerned.  She remembers the medical kit in the car and decides to go get it.  Look at the determined look on her face – she’s made up her mind!

Still determined, off she goes so she can help Lee.

Rudolph tries to stop her, but Amanda doesn’t really care what he has to say.  A:  I don’t care about national security. All I know is I don’t want him to die. 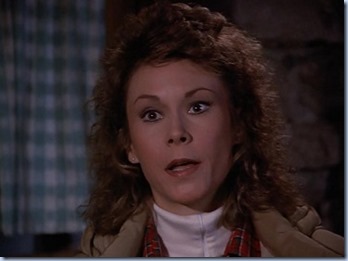 Rudolph doesn’t give up, he doesn’t want his daughter to try get by the KGB.  A:  I’m not your daughter!  Rudolph is stunned and Amanda just broke her cover to save Lee.

A:  My name is Amanda King, Mr. Rudolph.  I work part time for the Agency, rank GS-7 Seasonal Employee.  I’m very sorry.  How sorry do you think Amanda really is?  The Bite-Sized Amanda post for this episode will be a good one!!

A:  May I have your attention, please?  She is one very brave woman!   And still using her manners in the face of danger!

A: We have a wounded man inside and he is hurt very badly and I need to go to the car to get the medical supply kit. So that I can help him. So,

A:  It’s awfully cold out here, so if you’d like to come inside the cabin and wait for me that would be alright. Look – voice breaking – it’s Christmas Eve. Ahem. And I don’t know what that means to you.

A:  But to me it means that we should be thinking about peace. And helping each other. 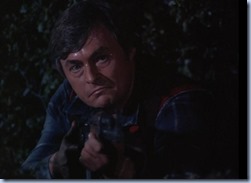 We can see Rudolph and Dimitri are affected by what she is saying.  I Wonder what Scarecrow would be thinking and if he would be affected. 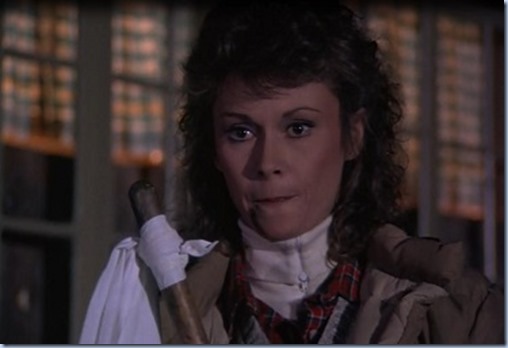 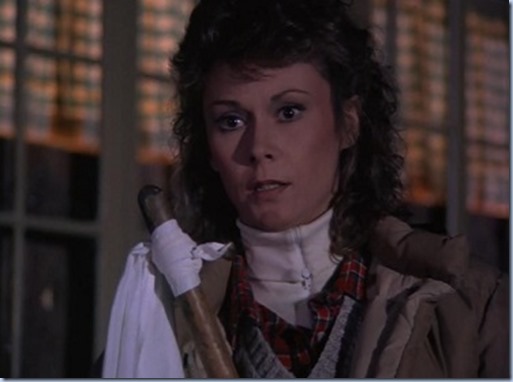 A:  And I wish I were but I’m not. I’m here. All I’m asking you to do it just call a truce for a few minutes so that we can help each other. And that’s all and now I’m going to step down and please don’t shoot me.  Like I said, this episode is going to make for a good BSAmanda post and comment discussion!

At the end of her ramble, Dimitri grabs Amanda by surprise.  Does scaring the heck out of her count as a booboo???  Love KJ’s face – she is sooo good with her face – like we saw in the ramble.  Bravo, KJ! 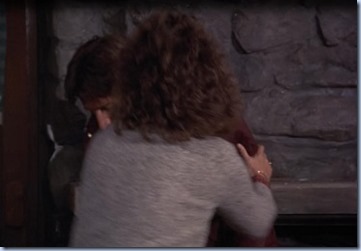 Lee’s just been shot and makes it safely back to the cabin.  Amanda’s all over him in this scene.   Two hands here. 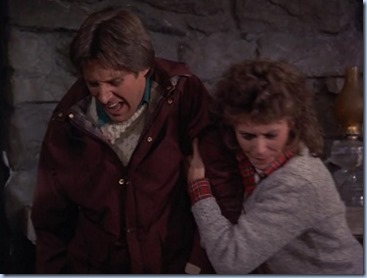 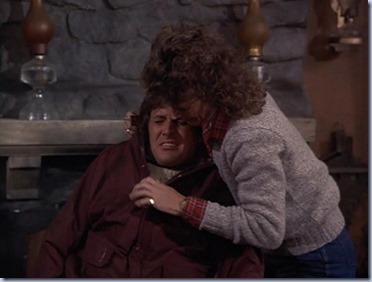 Two more hands, plus she’s got her chest on his shoulder.

She’s moved her left hand and her cheek is on his forehead. 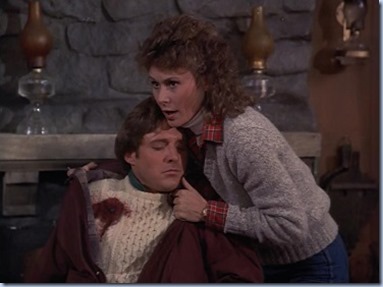 Her thumb is just barely touching his cheek and his head is now snug against her right shoulder. 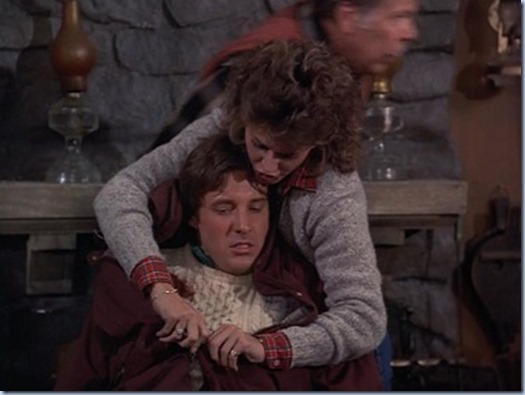 Two new hand positions, Lee’s head is propped up by her chest now and it looks like her chin is keeping his head up. 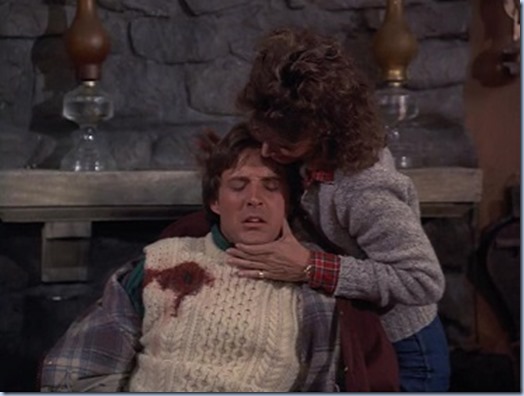 New hand  and head positions again!  Amanda is really being very careful with Lee’s body here.  Love how she keeps his head up with her thumb and forefinger.  Her other hand is on the back of his head.

Rudolph gets in on the action!  Amanda has both hands on Lee in both pictures.  Lee really looks like he’s in pain!

More two hand touching here too.  Amanda is telling Rudolph there is a medical kit in the car.

Awwww, love this pic!  The pain is gone – or Lee’s passed out from too much pain – and Amanda is right there by his side.  Love how they are resting their heads on each other and Amanda’s got his chin.  Again.  Gosh, there’s a lot of plaid in this picture!

Amanda is just sitting here with Lee.  I wonder what Rudolph thinks of her.  This is before he finds out she’s not his daughter.  I didn’t include the pics, but Amanda pats his head three different times here. 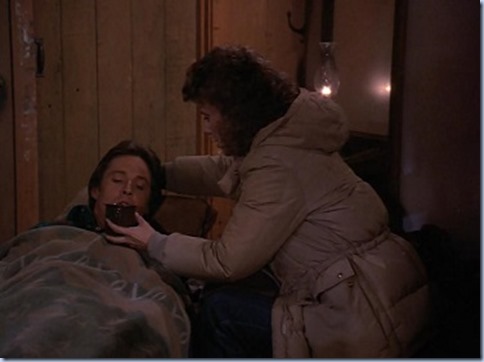 In this scene, Amanda gets in another two hand touch as well as six additional head pats or rubs.  Six!  She can’t keep her hands out of his hair! 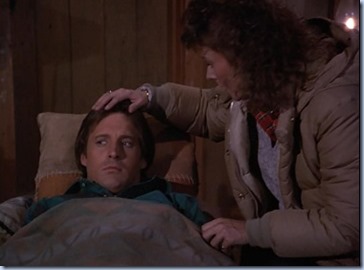 Lee is waking up after a quick nap.  She’s back at it!  More two hand touch and head patting. 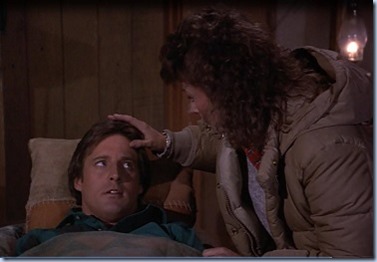 L:  What the hell is going on here?

L:  Ivan and Dimitri?  Oh, I don’t believe this…I’m in the middle of The Brothers Karamazov!  I know that’s a book by a well-known Russian author, but will someone out there explain the relevance to those of us who’ve never read it?  The patting continues.

Is she sitting on his lap?  Probably the arm of the chair – but they are very close – much closer than your typical co-workers if you ask me!  I’m counting this as a touch – If she’s not on his lap, then his right hand might be on her, I think. 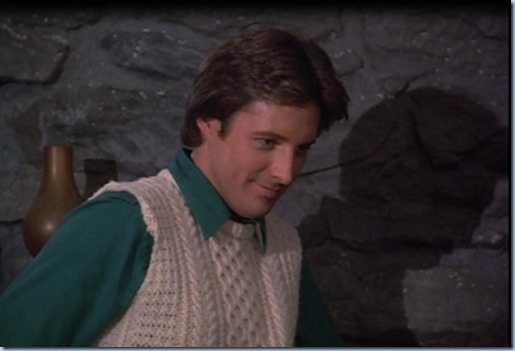 LOL – Lee is listening to Amanda tell her ‘father’ how she usually spends her Christmas…at home with a guacamole dip, champagne and a football game.  How does it sound, Lee? 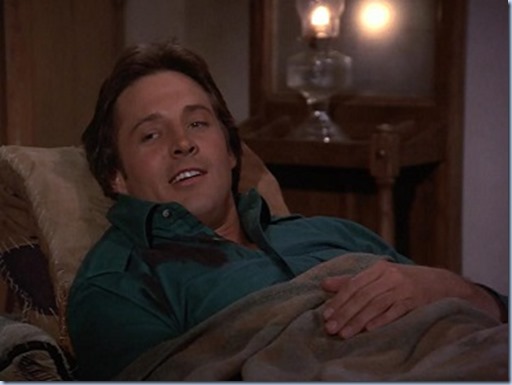 L:  It’s a crazy business we’re in, huh?  Yep!!  Even though it’s directed at Ivan, I had to include this dimple shot!

L:  It was a hell of a Christmas Eve, wasn’t it?  Awww.  What is he thinking, here?  Looks to me like he’s thinking admiring thoughts of the bravest woman he’s ever gonna know!

Here’s another view of it – a split-second later: 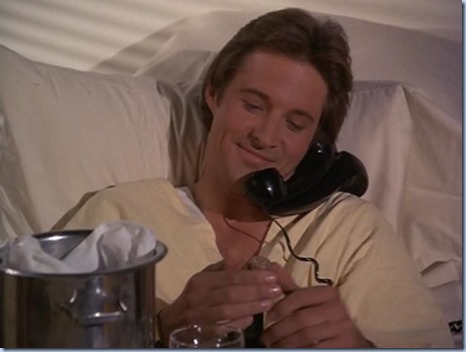 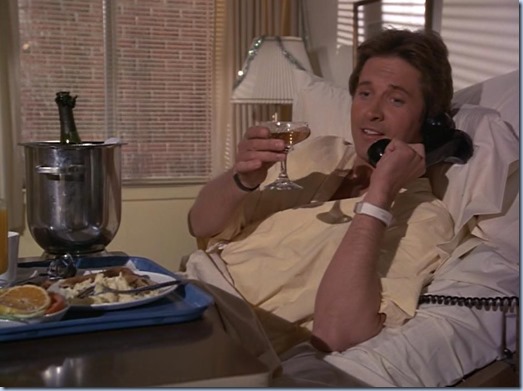 L:  Merry Christmas, Amanda.  Damn, this is one of those times I wish I could have an Audio Play button.  This just makes me go weak in the knees!  It’s a good thing Amanda is sitting. 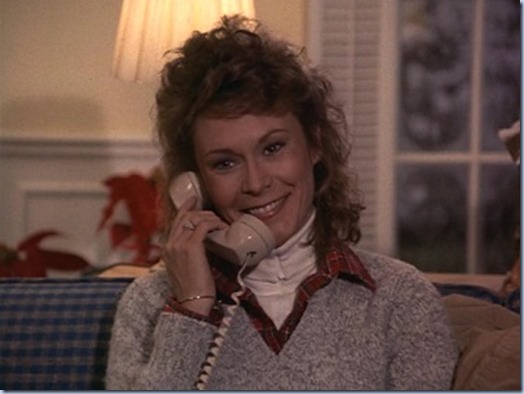 A:  Merry Christmas (pause…), Lee.  Ahem, I think it did affect her!  That is a pretty big grin right there.  If she were Rudolph, her nose would be glowing full on!

Merry Christmas, everyone!  Peace on Earth and Good Will toward men…and women!

I hope you all have a wonderful holiday!  Thank you for reading and taking the time to comment.  Here is iwsod’s first TLCE post if you’d like to go back and read her episode recap.